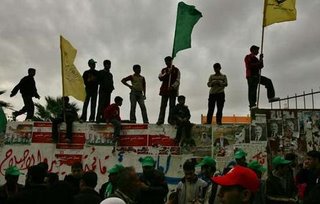 How long is a sane man expected to sit on his hands while his enemy slaps him in the face? The Palestinian people have endured a prolonged aggression by a pariah state, and yet the world not only expects them to sit on their hands, the world blames them for it.

Why are the Palestinian people expected to take the blame? Apparently, the world is infuriated by their democratically electing Hamas, a “terrorist organization,” into government. Setting aside the word terrorism and the West’s perversion of the definition—would one not have to engage in “terrorism” or even attempt to engage in “terrorism” to be a “terrorist?” According to a Shin Bet report, Israel’s internal general security service, Hamas’ military wing has not been responsible for a suicide bombing in nearly two years. Israel has not blamed a single Israeli death on Hamas in 2006. Furthermore, hard-lined Israeli Defense Minister Shaul Mofaz reluctantly admitted that Hamas did not coordinate any of the rocket attacks fired from the Gaza Strip in recent months. So what’s the problem? According to Mofaz and his ilk in the Israeli government, Hamas is still a terrorist group because it’s not proactively preventing Islamic Jihad and Al Aqsa Martyrs Brigade from carrying out attacks against Israel.

Is this a fair critique? Hamas, who has not even taken over control of the security apparatus in the Occupied Territories, is expected to force Islamic Jihad and Al Aqsa Martyrs Brigade to halt all attacks on Israel (which Israel refuses to reciprocate) without the resources or political capital to do so. If Hamas tried to disarm the militant groups in the territories at the height of Israeli aggression against the Palestinian people, complete chaos would break out. Moreover, this call is being made while the world is bankrupting the Palestinian government (in turn bankrupting the Palestinian people).

In the large sea of global politics a minnow like the Palestinians cannot survive without protection and fresh water. The disappearance of objectionable voices that once cried out for the rights of the Palestinian people is pushing those in the Occupied Territories down a very narrow path. Many in the European Union are now towing the line for Israel’s rhetoric and policies, while most of the Arab states have been “forced” to join the ride due to US pressure and sanctions.

The world’s turning its back on democracy and the Palestinian people is an intolerable breach of humanity. In recent weeks, America and the European Union have decided to cut a combined one billion dollars in aid to the Palestinian people. The yearly Gross Domestic Product (GDP) for the Occupied Territories is an estimated 2.5 billion dollars. The GDP figure continues to drop as unemployment skyrockets in the territories—furthering poverty, malnutrition and civil unrest. The world’s economic strangulation is leaving the families of 150,000 Palestinian Authority (PA) employees to suffocate in their already ominous conditions. When the average PA worker, as noted by PLO Ambassador to the US Afif Safieh, takes care of seven or eight family members, the cutting of salaries affects nearly one-third of the Palestinian population in the West Bank and Gaza Strip. The continued withholding of Palestinian tax money in East Jerusalem, in addition to the intensified checkpoints, border closures, and constant bombardments on Gaza has left Palestinian society paralyzed.

Is the isolation of Hamas justified? Not only has Hamas halted all attacks, as previously mentioned, but they’ve called for “calm for calm,” which Israel subsequently rejected because Hamas is a “terrorist” entity. Yet, Hamas’ existence didn’t stop Israel from signing the Sharm Al Sheik cease-fire (which Israel rarely abided by), but now that Hamas is in office, the Israeli tactic of isolation, unilateralism, and collective punishment has taken over concerns of diplomacy and peace. Hamas pledged to restore order to society (which would benefit the security of Israel) and indicated it would curb attacks by groups such as Islamic Jihad and Al Aqsa Martyrs Brigade in the “calm for calm” period. A new Palestinian poll found that 75 percent of the Palestinian population wants Hamas to hold negotiations with Israel—a move that Hamas has not objected to. Hamas stated on numerous occasions that it is willing to negotiate with Israel through an interlocutor such as President Abu Mazen (a man who has visibly chosen partisan politics over leadership). Hamas clearly laid out its demands to Israel (which fall in line with international law and multiple UN resolutions): full withdrawal to the 1967 borders, complete autonomy within the territories, control of its borders, and a full right of return. So let’s call a spade a spade. Israel is engaging in state-sponsored physical, economic, and political terrorism—in an attempt to choke to death a people that have been deprived air for nearly 60 years. The question remains: will those who value peace have enough sense to object or will they wait until it’s too late?


Remi Kanazi is the primary writer for the political website www.PoeticInjustice.net He lives in New York City as a Palestinian American freelance writer, poet and performer and can reached via email at remroum@gmail.com