"The School where Jews and Palestinians Learn Peace" 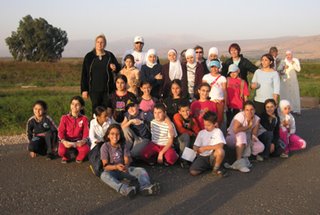 “My Arab friends know that I study along with Jewish children,” Moustapha explains, while nibbling a pencil. “And they ask me: what are the Jews like? Are they intelligent or stupid? Do you ever quarrel with them? Yet, I have fun at school.” Moustapha is 11 years old and lives in Bet Zafafa, an Arab village located in Jerusalem’s suburbs. In his classroom, at the desk near his, there’s Even, a freckle-faced Jewish kid with a marked American accent.

Even and Moustapha attend Hand in Hand, the multicultural and bilingual school which in Israel is becoming an extraordinary reality. It is built on a very simple concept: peace between Arabs and Jews is before all else made at school, by teaching the two national languages of Israel, Arabic and Hebrew, to everyone. And by learning to respect and know the three monotheistic religions: Islam, Judaism and Christianity.

Hand in Hand is a private school recognized by the Israeli Ministry of Education. To date, there are 676 students, divided between nursery school and elementary school: students have doubled in just the past two years and last fall, 120 enrolment requests had to be turned down on account of a lack of space. The school is located in three branches: in Jerusalem, in Galilee and in the Arab village of Wadi Ara. And in the next five years, in consideration of catering to all the demands, ten new schools are expected to be constructed.

“And to think that only back in 1997, when we started, we had to persuade the parents one by one,” the director dealing with the school development, Bob Fenton recounts. “There was a great deal of fear. In this country, a Jew is worried when having to address an Arab, and vice versa; on the contrary, it’s fundamental that there are more and more relationships between us.”

Everything that happens in the Israeli schools is crucial for the coming times, Fenton continues: “The population is 20% Arab and 80% Jewish. Most of the families send their children to schools being attended by either only Jews or only Arabs. This increases the division. Instead, in Hand in Hand schools this fracture can’t be perceived: each school has two principals, one Jewish and the other Arab, the classrooms are perfectly divided in the same amount of students for each of the two sides; and two teachers, one Jewish and one Arab, give lessons together. This fact compels parents, students and teachers to multiply relations with one another.”

The Hand in Hand school of Jerusalem is situated in the Baka quarter, only ten minutes away from Bethlehem’s check-point, where the wall raised by the government is the most blatant mark of that tragic absence of communication. “Although they don’t understand the causes, the children deeply experience the conflict and fear,” explain Yaffa-Shira Grossberg and Enji Watad, who teach in the same second year classroom in Jerusalem. “In class, we make them speak to one another, we urge them to ask questions in order that they can listen to one another. This favours dialogue and dissolves the tension.” Yet, finding common answers isn’t an easy job.

“One only has to think of how history can be interpreted,” Fenton remarks: “to Jews, Independence Day is a holiday in memory of the land again recovered after thousands of years; to Arabs, the same day is the Nakba, the catastrophe, when hundreds of thousands of people were forced to leave their homes. When speaking to the children, we talk about both the Arab villages which were destroyed and the Holocaust; and we also tell them how Jews and Arabs used to get along with one another in Spain. We tell them that ours can be the country for us all.”

“Our children learn to see reality in a complex way,” we’re told by Dalia Peretz, sister of the Labour Party leader, Amir Peretz, and who for years has been the co-director of the Jerusalem school.

“More and more families are making requests to us to give this kind of education to their children. In the beginning, maybe they were from a cultural elite only. Now, on the contrary, the context has changed: those arriving here are parents from all the social classes, both well-to-do ones and not.” The yearly fee is one thousand dollars, little more than the state school’s one; yet, should a family have economic difficulties, it receives some help. Hand in Hand’s closing balance for 2005 amounted to 1.6 million dollars, in large part represented by the offers from benefactors. “The most numerous group of students belongs to the middle-class,” Dalia continues, “while there are very few orthodox students, of all religions.”

Doctor Shafiq Masalka, a Muslim Arab, is a long-standing upholder of the project and enrolled his children there from the start. Psychologist, he teaches at Tel Aviv University and at Hebrew University of Jerusalem and lives in a residential quarter together with his wife and four children. “We Arabs from Israel are a segregated minority,” he says. “I really only had a chance to make acquaintance with a Jew when I came to Jerusalem to attend university; before that, I studied at Kufar Qari, my village, south of Nazareth, and there was no possibility to meet Jews. That’s why I decided to enroll my daughters in this school, so that they can regard Jews as human beings. And, in turn, be seen as persons.”

Wendy and Simon Weiss met and married each other in a kibbutz of the Negev desert. When they moved to Jerusalem in 2000, they were faced with the problem of finding a school for their eldest daughter, Noa: “The second Intifada had just broken out,” Wendy says, “and we thought, with this school, to have found a sort of solution to what is happening in this part of the world. We have to be able to live together.”

“Having a chance to speak with the Arabs, this is the great idea,” Simon continues. “If I think about the fact that my daughter will be able to talk with her neighbours in their national language, then, in the future, it will be easier to find common ground and come to some solutions.”

Nonetheless, there are also some fears: “Many are concerned about the fact that such a school may cause the children to lose their identity,” doctor Masalka explains. “On the contrary, I believe that my daughters are more aware of their identity than many children of the same age, just because they are able to see themselves through the differences between themselves and others. And the same goes for the Jewish children.”

Translated from Italian by Diego Traversa and revised by Mary Rizzo, member of Tlaxcala (www.tlaxcala.es), the network of translators for linguistic diversity. This translation is on copyleft.