Even Escape is an Art – Fabio Mini* 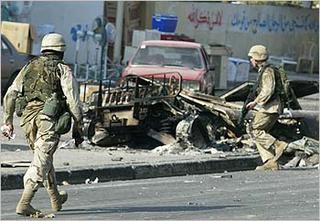 
If the USA were to withdraw from Iraq, it would be chaos. Because the Iraqi troops can’t be counted upon. And the Pentagon is even starting to hypothesise a new an action against Syria and Iran


In general, an “exit strategy” (how to leave a foreign war theatre) is not so much a strategy as an organisational matter. It is sufficient to have it clearly laid out who is the winner and who is the loser. If one wins, the exit takes place with fanfare and medals; if one loses, the organisational matter is actually simplified: either the winner holds them prisoner, or they are kicked out mercilessly. The exit becomes a real strategy when the “level of capitulation” is reached, that is, the limit of toleration of the losses and costs, when one is no longer able to contain the adversary, when the military or political usefulness of the action of war is nil and when major losses or breakdown must be avoided. The most complex exit strategies and the most inauspicable are obviously those to enact when who has won or lost is unknown, or if one pretends to have won when they really have lost. It is the case of the situations of a deadlock in which neither of the contenders is able to prevail and the variation of equilibrium of forces itself, of behaviour and motivation, could determine the defeat of one or the other.

In the last fifty years of military history, as well as that of international politics, we have seen the armed forces that were the strongest in the world debate among themselves over the dilemma of the exit strategy, precisely for the triple incapacity of bringing the victory, admitting the defeat and dealing with the deadlock. The Americans have begun the negative series with the Korean War (the first that had not been won, as General Harrison, who signed the armistice, admitted) and with Vietnam (a defeat). The Soviets followed in Afghanistan, the Chinese in Vietnam and a bit, all of the others, we Italians included, in Somalia. Wars that have been won and exits that are simply organisational have taken place only in the Falklands and Grenada: two small islands.

Iraq is an emblematic case of a deadlock in which the variation of the equilibrium can bring to the edge of capitulation, but at the same time, the commitment seems to be ever more heavy and non-sustainable. The strongest country in the world has almost all of the military resources, as well as the human and financial ones, concentrated in a limited theatre. Emphatically, Rumsfeld said to the 150,000 American soldiers still present in Iraq during his latest flash visit: “We don’t have an exit strategy, we have a victory strategy”. The victory, true or presumed, real or virtual, is therefore the key and the premise of the American exit strategy and it becomes that of all those nations who don’t intend upon dissociating themselves from this policy. But after the military operation of 2003, the search for victory has had to move on the political plane, establishing first that it coincided with the famous passage of “sovereignty”, then with the “democratic” elections, and then with the formation of the government. Now the victory would consent that the exit coincides with the capacity of the Iraqi security forces to take care of themselves (a very complex thing) and the Iraqis (very difficult to do) in a way that is not in practice the same as that of Saddam. In all of these “victories”, in the meantime 1,741 American soldiers have died, 89 British ones, 25 Italians, 18 Ukrainians, 17 Poles, 11 Spaniards, and 8 from other countries: for a medium of 80 a month. The civilian deaths among Iraqis number approximately 25 thousand. The wounded Americans are more than 13 thousand. And the new “victory” to accomplish with the autonomy of the Iraqi police force and army seems to be just another convenient goal that is more political than operative. The consignment of a solid and lasting operative capacity is however indispensable and one cannot attempt to make experiments or to throw in the front lines forces that have not been adequately prepared. In the hundreds of attacks of every sort there have already been more than 1,500 Iraqi soldiers or policemen killed and another 6,000 have been wounded.

The objective of having 260,000 men in uniform (in a nation with a population of 26 million), is not impossible to achieve; at this point, there are already officially 240,000 of them. But numbers cannot give the certainty in a system where the salary is seen as a sort of owed subsidy. A private American agency has been hired to check how many policemen and soldiers absolve any kind of duty at all in respect to that which is the quantity listed in the payrolls. The first results are not encouraging: at the end of the roll call, those absent seem to outnumber those present. On the plane of professionalism and motivation the minimum goals are far from being met. Out of a police force of 142,000 people, only 39 percent turns out to be prepared. The armed forces, numbering approximately 98,000 men is said to be operative at 69 percent, but not for tasks of public order or policing. The trustworthiness of the Iraqi police force – trained for the most part by private American companies – in terms of respect for the law and for human rights is still very much lacking: a rapport by the Department of State speaks of homicides of political opponents, extortion, rape and torture. If this happens today with an imposing presence of international forces, then any scenario depicting a disastrous reality after a withdrawal seems justified. Some evoke the prospect of a civil war, of genocide by the rebels against the “collaborators” and ethnic and religious feuds which confirm the extreme fragility of the situation, while others attempt to furnish an image of an internal situation that is stable and more or less “normal”.

Even without putting much credence in the theory of the civil war or the “genocide”, the degree and type of risks of a mass withdrawal depend upon the zone and the role that is currently held by the international forces. In the Kurdish part the American presence is already reduced and caries out indirect tasks of security. In the Sunni triangle and at Baghdad the function of security to the civil population or of the government structures is grossly overshadowed by the need for self protection: the US soldiers are concentrated primarily in defending themselves from assaults. In the Shiite area of the south the security function is essentially self-protection while in favour of the community and the local administrations the military forces undertake duties of assistance, including important humanitarian assistance, but they are not a determining factor in guaranteeing local security. And while in the south one may hypothesise a massive reduction of the foreign contingents, it is doubtless that a possible withdrawal of the American troops from Baghdad and in the Sunni triangle would induce the Iraqis to a drastic revision of the relationships of the internal forces. If this process of revision does not respect any democratic rules and is not controlled by the international community, it would leave space for tribal dynamics which have a predictable result. The prospect, in this case, would be a long period of transition until a new equilibrium between the ethnic groups is established, or until the rise of a new dictator.

But the war in Iraq has introduced an ulterior parameter of instability: terrorism, which is important to consider as separate from rebellion. With the regime of Saddam, the only terrorist was he himself, even if is relationship of cooperation with Osama Bin Laden are still to be demonstrated.

Today, on the other hand, the alliance between Al Qaeda and Al Zarqawi is a certainty and it is the fundamental novelty that links international fundamentalist terrorism to nationalism. Whatever exit strategy that takes place must therefore take into account that the destiny of Iraq is no simply a limited internal question. The war has put into movement a series of related mechanisms that intend upon altering the regional scheme. And they have succeeded. The post war has put into movement still other mechanisms that reflect upon the entire question of world security. The fresh outbreak of fundamentalist terrorism is one of the most tragic aspects, but far worse is the birth of terrorism in the diasporas that is stretching out to other nations.

It is also for this reason, the idea of unlocking the situation of deadlock with an action of force is one of the strategies thought of in the environs of the Pentagon both for eliminating the Iraqi rebellion and the terrorism once and for all, and as a way of leaving Iraq. The idea of making a clean sweep of all the possible oppositions and terrorists, running the risk of eliminating a great number of innocent people, is a temptation to many hawks and it is not said that is has not already been accomplished in a local sphere. The idea of “exiting from Iraq by passing through Syria and Lebanon” (read: war against the first and revolution in the second) does not enjoy the pre-bellum favour, but it is still in the minds of some authoritative supporters of the Victory Strategy. The same exit can make “passing through Iran” necessary.

The American interests in Iraq are at this point enormous and the debts so far accumulated (more than 500 billion Dollars) does not consent (even if they wanted to) that the United States close the shutters and go. It is not even a question of saving face. The question is taking advantage of the money already invested. The large corporations that have had contracts must be paid, the Iraqi government must guarantee a certain normalcy, but the entire Iraqi and international community present on the soil have to accept a high level of endemic violence. With these premises, the Americans and the British will begin to reduce their own contingents, trying to not add to the level of capitulation and leaving in place enough forces, not so much so as to guarantee the growth of Iraq or the democratisation of the country, but to safeguard their own interests and investments. Of the other countries who decide to remain in Iraq beside the Americans and British, or even in a form of bilateral cooperation with Iraq, must be certain to have a portion of interests and a concrete project: something to do and bring to its conclusion in an established period of time and at an assured budget. That will be the factor that decides what to leave behind and what to bring back home.