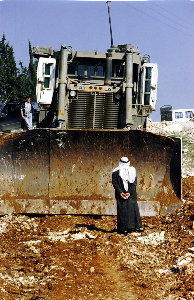 Jennifer Loewenstein wrote one of the best essays ever on Gaza. She received many letters in response, and from those, she forwarded to Counterpunch some of them. One of which was published in a newspaper, and which I think is so good, I want to reprint it:

For those who got teary-eyed over the drama of Israeli settlers being removed from Gaza (luring some 4,000 reporters), I’d like to offer some perspective.

The settlers were illegally there, and most knew it. If not, the Israeli government surely did. It violates international law for an occupier (in this case Israel) to allow its own population to settle in land it occupies (Palestine). Why should Israel be exempt from this law?

Furthermore, the settlers will be well-compensated. Families will get between one and four hundred thousand dollars ($250,000 on average) for leaving Gaza, plus living quarters until permanent homes are built. Will Mr. Bush use our taxpayer dollars to foot this bill too?

In shocking contrast, Palestinians get absolutely nothing when they are forcibly removed by Israeli Defense Forces (IDF) from the homes they and their families have lived in (legally) for hundreds of centuries before Israel’s 1948 creation. Collective eviction & transferring that smacks of ethnic cleansing, bombings and bulldozing of homes, buildings, farmland, and olive/citrus groves (using the same American-made ‘Caterpillars’ that crushed to death American peace activist Rachel Corrie in 2003) are routine tragedies for average Palestinians, and they don’t have to be related to suicide bombers, either. Few, if any, American reporters cover these events.

In the case of the Israeli destruction of the Palestinian town of Jenin, Prime Minister Sharon wouldn’t let anyone in, not even medical workers or UN officials, for two weeks after the offensive. Evidently, they had to ‘clean up’ first. When reports finally did come out, how many of us shed tears for those poor families who were left with nothing but the clothes on their backs, mourning their dead who were bulldozed into mass graves?

No temporary living quarters… no new homes… not one ‘red cent’ have Palestinians ever received in compensation for their losses at the hands of underground Zionist terrorists of the past, whose leaders have been governing Israel ever since, and now the IDF. Furthermore, those native Palestinians who fled for their lives to neighboring countries have never been allowed to return, while Jews of various nationalities can move there anytime they want.

The Gaza settlers comprise a tiny percentage of Israeli squatters in Palestine. In the West Bank, around 400,000 Israelis have settled illegally, occupying the choicest properties and stealing the larger part of Palestine’s underground potable water. Thousands of them were born, bred and brainwashed in the U.S., which explains the Yankee accent we often hear among them. According to a recent article in Barron’s, Israel offers tempting incentives to potential Jewish immigrants, especially married American couples, to whom they’ve been giving $30,000 (cash) to become Israeli citizens.

There is a grander purpose for this ‘great settler removal drama’, as I like to call it, other than returning a molecule of land to Palestinians and giving the world a false sense of hope that peace is at finally at hand. Don’t be fooled. Israeli forces will still be entrenched along the border of Gaza and Egypt, as well as have a presence on their own borders with Gaza, ready to re-occupy at the drop of a hat.

More significantly, the theatrical Gaza withdrawal is distracting the world (including those 4,000 reporters!) from what’s going on in the West Bank, where Israel is increasing its stranglehold on Palestinian land. With Sharon’s approval, the construction of the ‘wall/fence’ that was flatly condemned by international law continues cutting deeply into Palestinian territory, separating families from each other, their land, and, thus, their livelihoods. Palestinian East Jerusalem and other parts of the West Bank are being quietly annexed through various constructions and settlements. It’s been widely publicized that some settlements will be removed (‘outposts’ are not settlements, incidentally), but we hear little about the new ones being created in blatant defiance of Bush’s ‘Road Map’, in locations that better align with Israel’s long-term plans.

Anyone closely following the Israel/Palestine situation knows that the biggest obstacle to peace, aside from the military occupation itself, is the illegal Israeli settlements in Palestine. Realistically, there can never be a cohesive Palestinian state with them in place. We can blame suicide bombers all we want, but they wouldn’t have emerged were it not for the incredibly inhumane occupation and the presence of all those settlers that wreaks havoc on Palestinians’ daily lives. If Israel truly wants peace, therefore, why is it continuing on this provocative path of expansionism in the West Bank, and, just as important, why is Mr. Bush turning a blind eye to it all and calling Mr. Sharon “a man of peace”?

Elaine Washburn Shiber is an active member of Amnesty International and a free-lance writer. She lives in Van Lear, KY