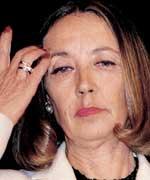 In Italy, we sometimes get earthquakes. They have tragic consequences. Then, we often have long draughts or worse, flooding, which devastates all things natural and manmade. But, we have yet other disasters to worry about, although they don’t make much noise outside of the peninsula. One of them is an internet site called Informazione Corretta (Correct Information), which is a Pro-Israel media monitoring group. It’s usually pretty predictable, La Stampa, Libero, Il Foglio and most of the time Il Corriere della Sera are the good guys and Il Manifesto, La Repubblica and Il Mattino are the bad ones.

Today I took a look to see what they had to say on the Gaza Disengagement, and I found this little tidbit. Another Italian disaster, Oriana Fallaci interviewed for Polish Television and reprinted by Libero. I am only going to translate the first segment. I can’t say “paragraph”, because this rant looks graphically like a few pages of Finnegan’s Wake, where it’s all one long, endless, torrential paragraph. Take a look yourselves (better yet if you read Italian and can get the effect of raising a manhole to a sewer yourself. You soon enough will swim knee deep in it and rubber boots aren’t enough). here it is.

And without further ado, the first segment of the “interview”.

Padre Andrzej Majewski, director of Poland’s public television network Telewizja Polska: Those responsible for the terrorist attacks on London were Muslims born in Great Britain or English citizens They can therefore be considered Europeans. Do you believe that in order to defend our continent and western society we should banish all the Muslims of Europe?

Oriana Fallaci: To begin with, they are not Europeans at all. They can’t be considered Europeans. Or not more than how we could be considered Islamic if we lived in Morocco or Saudi Arabia or in Pakistan taking advantage of residence or citizenship. Citizenship has nothing to do with nationality, and it takes a good deal more than a piece of paper on which it is written English or French or German or Spanish or Italian or Polish citizen to make us English or French or German or Italians or Poles. That is, an integral part of a history and a culture. In my opinion, even those with citizenship are guests and that’s that. Or rather, privileged invaders. Then, it’s one thing to expel the terrorist students or aspirant terrorists, the illegal aliens, the vagabonds who live by robbing or selling drugs, or better yet, the Imams who preach the Holy War inciting their faithful to massacre us. It’s one thing to indiscriminately throw out an entire religious community. Forced exile is a punishment that already in the 1800s in Europe was applied with circumspection, and only for certain individuals. In our times it is applied only to kings and the royal families who have lost the game. In other words, it is no longer fitting for our civilisation. To our ethics, to our culture. And the idea of paradoxically transforming ourselves from victims to tyrants, from persecuted to persecutors, is unconceivable for me. It makes me think of the three hundred thousand Jews who were thrown out of Spain in 1492, to the pogroms in which the Jews have been victim of in the entire course of their history. Naturally, if they want to go of their own free will, I wouldn’t cry over it. Quite the contrary, I would light a candle to the Madonna. In the essay published a few days ago by the Corriere della Sera, “We are treating the enemy like a friend”, I even suggest they do so. “If we are so ugly, so bad, so disgusting and sinful,” I say, “”if you hate us and despise us so much, why don’t you just go back to your own homes?” The fact is that they would do anything but. It’s the furthest thought from their minds. And even if they were to think about it, how could such a thing take place? Through an exodus equivalent to that in which Moses brought the Jews from Egypt and crossed the Red Sea? They are too many, by now. Calculating only those who are in the European Union, as the most recent data suggests, they are around 25 million. Calculating even those who are in countries outside the European Union and in the Ex Soviet Union, around 60 million. That is their Promised Land, do you understand me? Respect, tolerance. Public aid, freedom aplenty. Labour unions, ham, the much detested ham, wine and beer, the much detested wine and the much detested beer. Blue jeans, license to exert in every sense assertive acts that are neither punished nor retorted or condemned. (Including the right to throw crucifixes from windows). Protectors of the collaborationists always ready to defend them in the papers and to impede their expulsion in the courts. Dear Father Andrzej, it is by now too late to ask them to go back home. We should have, you should have, asked that of them twenty years ago. That is, when I was already saying, “But don’t any of you understand that this is an invasion that has been well calculated, and if we don’t stop them we will never be free of them again?” ................... and on she rants for another several hundred lines.