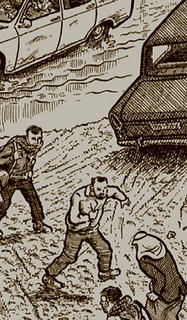 In an article for the Daily Star published also in Palestine Monitor, Rami G. Khouri writes that the disengagement is an expedient to only settler further into the West Bank. He writes:

Just as there is a virtually unanimous international consensus on the illegal nature of the Israeli settler-colonies, so is there also global agreement that Israel must leave the territories occupied in 1967, negotiate a fair settlement of the refugee issue, share Jerusalem and coexist in peace alongside a sovereign, viable Palestinian state. The deep skepticism about both the impetus and the impact of the Gaza withdrawal reflects the perception - rooted in historical experience - that Israel is behaving only according to its sense of how to ensure its security through the use of its force, rather than through compliance with international law and the will of the community of nations. There is something slightly politically devious about Israel's withdrawal. It does not have the compelling ring of authenticity and honesty that characterized the white South Africans' coming to terms with black majority rule, or Mikhael Gorbachev's coming to grips with his people's right to freedom and democracy. It seems to be an expedient, grudging, defensive, reluctant endeavor. It is the enterprise of a thief who decides to stop stealing in one part of town, only to steal more efficiently in other neighborhoods.

Nevertheless, its deceptive morality aside, Israel's realities of the day suggest that its unilateral withdrawal does have the potential to advance the long-stalled peace-making process. This move is significant in part because Israel is unilaterally withdrawing from occupied Arab lands, ending some of its settler-colonial excesses, and defining part of its border. These trends need to be encouraged on other fronts where Israel is occupying and colonizing Arab lands, and this is where the next steps to come will be so important.
If all concerned Arab, Israeli and international parties work harder than before to make it clear that peace and security can only be achieved for all through a peaceful political process, rather than force of arms, we might see progress towards a fair, permanent peace accord. This requires that Israelis and Palestinians both abide by global law, rather than defy it with guns. The key to this is not a racist, colonial-era demand that the occupied, dispersed and blockaded Palestinians behave like nice children before they can hope to enjoy their human and national rights; the key is rather that Israelis and Palestinians who both respect the law and UN resolutions can expect simultaneously to live in peace and security.

Simultaneity is critically important for peace, because only if both sides feel they are achieving their rights will they continue with peaceful means of conflict resolution. The Gaza withdrawal must be a sign that Israel is forsaking occupation as an instrument to ensure its own security, not that it is returning some Palestinian lands in order to hold on to others.