who's to blame for the pain? 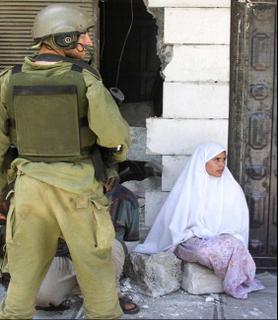 Recently, I have witnessed a lot of attempts to find a middle ground in the Israeli-Palestinian conflict. Many of these have as the basis the "mutual recognition of fault".

See for instance this text from The Parents Circle, an organisation that seeks to establish dialogue between bereaved Israeli and Palestinian families.

"The long-term goals of the Families Forum are to promote reconciliation between the Israeli and Palestinian societies.

The Families Forum aims to play a crucial role in spearheading a reconciliation process between Israelis and Palestinians. Such a process will allow both sides to come to terms with past suffering. The reconciliation process will provide a firm basis for the difficult measures a future agreement will include, by recognizing responsibility of both sides for the past. By allowing both Israelis and Palestinians to come to terms with the consequences of the escalating violence, both sides will begin to change their beliefs, which are at the root of the conflict. Currently the parties are too immersed in their own pain to be willing to acknowledge the other’s suffering. By acknowledging the personal narratives of victims of both sides, a new chapter in the relations between the sides may, at last, begin.

Past activities of the Families Forum have generated empathy for bereaved families of the opposing side, by gradually exposing both societies to each other loss. Palestinians and Israelis have so far avoided recognizing the pain of the other side. A reconciliation process initiated by the Families Forum can put victims, who refuse to revenge their loss and choose to reconcile at the forefront of public awareness. In doing so it will humanize both sides and will act as an example to the Israeli and Palestinian people."


Now, I am all in favour of reconciliation. But, let's try to see what that means. First, it is to realise there is a deep conflict that is difficult to transcend just with good will alone. One must recognise that which is "right" and where the "other" has been violated and not treated in a way that is "right". It doesn't mean that BOTH parties are "wrong". When both parties feel justified, the reconciliation is much more difficult.

Take the situation of child abuse. It is simple to realise precisely who is responsible for the pain, even if the abuser him or herself has some level of suffering due to the consequences of his actions. It is evident that the child whose parent had hurt him is not responsible for the acts done against him. He has absolutely NO need to apologise or to change his beliefs. Rather, he must learn to live with himself in a safe mental environment, and often separated from the adult who has hurt him, even if he loves him and needs him.

Why should the child come to terms with the legitimacy of the suffering his parent has? The child is the weak party, needs and must have protection, and his life and safety has been violated. This is simply the truth. It might be useful for the parent to eliminate some of his own responsibility, but it is not the task of the victim to acknowledge that in order to make reconciliation happen.

I see the situation between the Israeli and Palestinian people as analogous. The Israelis enjoy a rich western lifestyle at the expense of the Palestians. They have destroyed the social, economic and national structure of this people, and maintain the iron fist in order to do so. Their military, their checkpoints, their prisons are instruments to maintain this status quo, to keep the power firmly in their own hands. It is clear that the Palestinians have nothing of the sort to pit against the Israelis. At best, or at worst, they have rudimentary resistance, children who throw rocks at tanks, Qassam short range missiles and the suicide bomber. The equilibrium is so ridiculously pointed towards Israel in terms of force, power and aggression, so how can they maintain a victim narrative that is remotely realistic?

What are these groups such as the Parents Circle calling for? For Palestinians and others to abandon their support for the basic and legitimate aspirations of the Palestinian people. Of tilting the scales towards balance, in a situation where there really is no balance. This is whitewashing, it is not justice or redress. It will only serve to buy Zionists time and to promote their image of themselves as a peaceseeking people.

The Vatican has a very interesting article on reconiliation. I copy a segment here:

"Careful observers, studying the elements that cause division, discover reasons of the most widely differing kinds: from the growing disproportion between groups, social classes and-countries, to ideological rivalries that are far from dead; from the opposition between economic interests to political polarization; from tribal differences to discrimination for social and religious reasons. Moreover, certain facts that are obvious to all constitute as it were the pitiful face of the division of which they are the fruit and demonstrate its seriousness in an inescapably concrete way. Among the many other painful social phenomena of our times one can noted.

The trampling upon the basic rights of the human person, the first of these being the right to life and to a worthy quality of life, which is all the more scandalous in that it coexists with a rhetoric never before known on these same rights.

Hidden attacks and pressures against the freedom of individuals and groups, not excluding the freedom which is most offended against and threatened: the freedom to have, profess and practice one's own faith.

The use of torture and unjust and unlawful methods of repression.

The stockpiling of conventional or atomic weapons, the arms race with the spending on military purposes of sums which could be used to alleviate the undeserved misery of peoples that are socially and economically depressed.

An unfair distribution of the world's resources and of the assets of civilization, which reaches its highest point in a type of social organization whereby the distance between the human conditions of the rich and the poor becomes ever greater. The overwhelming power of this division makes the world in which we live a world shattered to its very foundations.

However disturbing these divisions may seem at first sight, it is only by a careful examination that one can detect their root: It is to be found in a wound in man's inmost self. In the light of faith we call it sin: beginning with original sin, which all of us bear from birth as an inheritance from our first parents, to the sin which each one of us commits when we abuse our own freedom. "

Yes, upon reading this, we see that the Vatican suggests that there are concrete reasons why there is conflict and why there is an impossibility to overcome them. To do so requires the offender to recognise his "sin", his "fault", to ask forgiveness, and not to expect that the other renounces his beliefs or accepts that the aggressor is in the right or somehow justified.

Unless Israel and its people recognise that reconciliation CAN happen if they want it to, and it is IN THEIR HANDS because they hold the power, anything else will just be putting a false facelift on a situation where a different solution is called for.

The road to hell is paved with good intentions.

As a conclusion to this post, I remembered an extremely important paper on child abuse, paedophilia and internet that Pete Townshend wrote. I think it is worthwhile reading, and it can be found here on a pdf file.