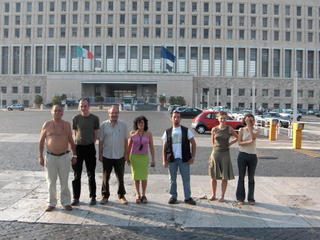 Eleventh day bulletin: Diary of the hunger strikers in front of the Italian Foreign Affairs Ministry.

For two days it has been impossible to send the diary of the hunger strikers. The violent thunderstorm Friday destroyed a tent and prevented us from using the computer.

FIRST PROBLEMS IN THE HEALTH CONDITIONS OF THE STRIKERS
Yesterday, eleventh day of the strict hunger strike, some of the strikers have experienced health problems. The intervention of a doctor has acknowledged the presence of a crisis caused by the lowering of blood tension due to the total fasting, combined with the physical weakness that is caused by the conditions of the permanent presidio itself. This morning, all of the hunger strikers will be subject to further medical examinations of their vital parameters.

Despite these problems, yesterday some of the comrades in hunger strike have participated in the riunion of the organising committee for the International Conference, which has decided to convoke a grand assembly 2 October at Rome, as a moment of continuing the struggle underway and as a passage for building the international Conference "Leave Iraq in Peace - We Support the Legitimate Resistance of the Iraqi People".

HAJ ALI IN IL MANIFESTO AND LA REPUBBLICAL
The news of the availability of Haj Ali, symbol of the torture of Abu Ghraib, to come to Italy and speak of his story and of the violence the Iraqi people is undergoing, is finally gaining space in the mass media. Friday and Saturday Il Manifesto dedicated two articles and a long discourse of Haj Ali, written by Lars Akheraug of the Norwegian Free Iraq Committee. Today Haj was interviewed by La Repubblica. His case is by now apparent to one and all. His visa is still awaiting to be approved. Our struggle will go to the bitter end.

Greetings to everyone from the comrades of the hunger strike.