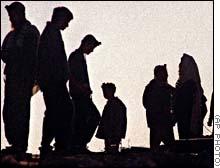 Last Saturday, after the demonstration in Bil'in, two of us boarded a bus bound for Hebron, a town of 130.000 Palestinians, 600 lunatic settlers, and 10,000 soldiers and police to 'guard' the settlers. Arriving at noon on Saturday, the day most settlers run rampant over everyone, we were told to immediately go to the top of the hill that separates settlers from Palestinians.

Within a half hour, several settler boys between10-17 came strutting down the road toward the small Palestinian children playing in front of us. The children left immediately, and we turned on our cameras as they advanced toward us. The older boys egged the younger ones to pick up stones and throw them at us two women who were sitting on a stoop. Stones came flying through the air, hitting me in the hand and thigh. Two soldiers who had been standing there watching finally called the police.

I screamed at the settler thugs and started up the hill after them, only to be pulled back by the soldier who said, "I'm sorry, but they get very upset when they see a camera. You need to put it away." "Put it away? Not on your life. You think I'm going to let those damned thugs get away with throwing stones at two women who were sitting there doing nothing?"

"Then take their parents in. Collectively punish them the way you do the Palestinians. Fine the crazy bastards."

You get the idea of the conversation. I, of course, have cleaned up my language, because I was furious and have a potty mouth when I get so mad.

We had taken plenty of video and could clearly see which boy had hit me. The soldiers suggested we take it to the police station the next day, and, if we left, they would stop them right away. Well, these nasty kids began a full-on riot, throwing stones at the police and army, throwing pipes off the top of their settler apartment at homes beneath them, screaming obscenities, throwing garbage and flashing mirrors in the faces of the soldiers. Little settler girls started to come down and throw stones. It was so disgusting; I finally left and got treatment for my cuts and bruises. The rioting went on for hours, into the night, where they threw boulders onto the homes of the Palestinians.

One Palestinian man called us and asked us to come to his home. The settlers had come in the week before, and they had cut through every single grape vine that he had, vines that were over 100 years old, thick as my (now aching) thigh. When he called the army, they had come in and said, "Go back in your house or we'll kill you." He had no choice, and every single vine has been cut in half. He took us out and pointed at one. "That one has a shoot growing already. They'll come back someday." My God, what could any of us say?

I spent the next two days at the police station making out a report and giving them video tape of the attack. One policeman said, "I really sympathize, but there's nothing we can do. They're under 12." "That hasn't stopped you from punishing Palestinian families when their kids throw stones... and you have 600 Palestinian children between 13-14 years old in jail."

After an hour of increasingly hostile conversation, he finally admitted that the last time he had tried to stop these thugs, they had slit all 4 of his tires. Another policeman said that they had broken his windshield. I said, "Welcome to Germany." and left.

Nothing will happen. Nothing will be done. These thugs will grow up to be the worst kind of Zio-Nazis, and even the police admit that. 600 of them have made life miserable for the Palestinians, they have closed the stores, thrown excrement and stones on the tops of homes, cut the trees, chain sawed the grape vines.

Today I went to Qawawis, a small village of 40-45 shepherds. We had gone for the day to protect them from the settlers who have beaten them and poisoned their sheep. 8 settlers had beaten a man who had been badly beaten last year and had gone to Iraq for surgery. He refused to make a complaint, more afraid of settlers and knowing that, even with three internationals, two UN observers who came part time and one Israeli from Tayyush, they would come back and kill him.

I am tired, I am hot, I am dusty, I finally had a shower after three days. I am burned, and I wonder what the hell I'm doing here and if we make one God damned bit of difference. Israel is committing silent genocide on a people who have been ignored and villanized. Their children look at us with big eyes and ask us why our government doesn't see what is happening.

What do I tell them? That the police and army refuse to see what they're doing? The policeman, a Sephardic Jew, admitted to me that he knew he was a second class citizen in a racist society. "But at least I'm a Jew." he said.

God help us all.

* Greta Berlin is a U.S peace activist visiting the Palestinian territories. She a member of “Women in Black”, Los Angeles, California