Omar Barghouti - The Morality of a Cultural Boycott of Israel 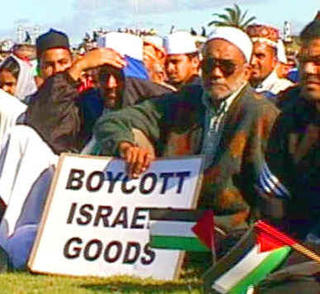 Israel’s breaches of human rights and international law give moral force to the argument for an international boycott, says Palestinian writer Omar Barghouti.

Linda Grant’s rebuttal of Jacqueline Rose’s courageous support for boycotting Israel reduces boycott to little more than censorship. Shifting the debate from issues of accountability, moral responsibility and legality into clichéd personal stories – in a way as whitewashing as her Guardian series about life in Israel – Grant avoids the fundamental issue evoked in the most recent calls for boycotting Israel: that Israel’s systematic violation of international law, its denial of Palestinian refugee rights, its continued occupation and colonisation of Palestinian land and its entrenched racist system against its own Palestinian citizens demand an effective response from concerned citizens of the world. Institutional boycotts similar to those applied to South Africa are what are called for, not censorship of this or that progressive Israeli writer or academic!

The latest Palestinian Call for Boycott, Divestment and Sanctions (BDS) – supported by a large majority of Palestinian civil society – does not target Jews or Israelis qua Jews; on the contrary, it actually addresses conscientious Israeli Jews, urging them to support efforts to bring about Israel’s compliance with international law and fundamental human rights, both necessary elements in reaching true peace based on justice. (The full text of the BDS call and the list of signatories to July 2005 is here.)

As a dance choreographer, I often face the question whether cultural bridges between Israelis and Palestinians cannot indeed advance the prospects for such a just peace more than concerted pressure on Israel. Ten years of the so-called Oslo peace process between Israel and the Palestine Liberation Organisation (PLO), endorsed by most civil-society organisations on both sides, attest to the abject failure of the illusion of peace to evolve into real peace. A decade of joint Palestinian-Israeli projects mostly resulted in providing a figleaf covering up Israel’s relentless colonisation of Palestinian land and its crimes against the Palestinian people.

Many Palestinian artists during that period were attracted for various reasons to such collaborations without being fully aware of the terrible consequences their involvement had in promoting the grand deception of peace without justice. With the ever-present lure of project funding, prestige and personal gain, even progressive artists have acquiesced at times to shifting the focus of their work from resisting oppression to communicating with “the other” to bring about change through persuasion. A joint Palestinian-Israeli theatre work, for example, was highly sought after as the ultimate model for promoting coexistence and mutual-recognition between the “two sides”.

Such an agenda essentially advocates a change in the “consciousness of the oppressed, not the situation which oppresses them”, to borrow Simone de Beauvoir’s perceptive remark. Or worse, it aims at changing the world’s perception of the conflict, by giving the impression of normal, even amiable relations between artists on either side of the colonial divide. The conflict is thus reduced to a psychological gap that needs to be bridged, a visceral tribal hatred that needs to be treated. The inescapable implication is that all that is needed is to accumulate enough of such collaborations eventually to overcome the bitterness embedded in conflict.

Those who support this agenda are guilty of moral blindness and political shortsightedness. Prolonging oppression is not only unethical, it is pragmatically counterproductive as well, as it perpetuates the conflict.

Cultural vision is thus compromised and intellectual honesty forfeited. Affecting a positive change in the relationship of oppression is thrown around at first as an empty slogan and ends up being unsolicited, even undesirable, later on. Consequently, this superficial, even insincere, “coexistence” mentality leads to nothing other than prolonging the suffering, imprisoning hope and inhibiting real resistance to injustice. That is why I regard this as a cynical and deceptive agenda.

Some critics of boycott argue that it is still necessary for Palestinian intellectuals and artists to maintain and foster open communication channels with their Israeli counterparts, to debate, to share, to convince, to learn and ultimately to reach a common vision for peace.

I beg to differ. Those who imagine they can wish away the conflict by suggesting some forums for rapprochement, détente, or “dialogue” not conditioned upon common recognition of international law and universal human rights are either clinically delusional or dangerously deceptive.

Any sincere joint projects aimed at reaching a just peace must be unambiguously based on full respect of international law, rejection of all oppression and racism and recognition of equal humanity. Prior to establishing the latter, any communication is strictly an exercise in asymmetrical negotiations between oppressor and oppressed. The mutual recognition of equal humanity ought to be a necessary precondition for, never a consequence of dialogue.

Israelis who insist on asking the Palestinians to pay a political price in advance in return for their “noble” recognition of a meagre subset of Palestinian rights are not really seeking justice or a moral end to the conflict. Some shamelessly seek European funds; others do it for prestige or fame; and some even participate in this typical colonial behavior as a form of taming the Palestinian shrew, or inhibiting resistance to oppression. Most Palestinians who accept such humiliating conditions are primarily compelled by a resource-starved environment under occupation. They are as free in their “choice” to participate in such projects as a slave is in “choosing” whether or not to oblige when asked by her master to “make love”. Love, however, can only be made between the free.

Many around the world recognise the extent of Israel’s breach of international law. The real challenge now is to do something about it. Only by applying effective international pressure against Israel similar in scope and comprehensiveness to that successfully used to end apartheid in South Africa will intellectuals and academics be fulfilling their moral obligation to stand up for right, for justice, for equality and for a chance to validate the prevalence of universal ethical principles. By doing so, they will also serve in the most effective manner the cause of coexistence and real peace.