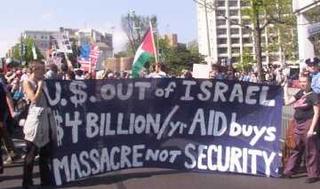 MARCH TO CONGRESS
U.S. OUT OF IRAQ - NO NEW WAR ON IRAN - END OCCUPATION OF PALESTINE

The DC Anti-war Network (DAWNDC.NET) has initiated a call for a Monday, September 26 protest at American Israel Public Affairs Committee (AIPAC) headquarters at 440 1st Street NW from 8:30 to 9:30 am. Tentatively, we will have a press conference at the protest at 9:00 am. At 9:30 am we will march to the United States Congress to visit congressional offices and attend public sessions sponsored by the congressional U.S. Out of Iraq Caucus and Council for the National Interest (cnionline.org).

Peace, anti-war and pro-Palestinian rights activists will protest pro-Israel lobby, neoconservative and Christian Zionist-promoted US wars against both Iraq and Iran. These wars are meant not only to control oil resources and ensure United States dominance of the region, but also to secure Israel’s 57 year illegal occupation of Palestinian land and its state-sanctioned discrimination against Palestinians. Two high ranking AIPAC staffers recently were indicted for illegally receiving classified U.S. military information which enhanced AIPAC's ability to promote
aggressive Middle East wars.

In protesting at AIPAC and in approaching Congressional representatives, we call for:

1) a speedy withdrawal of U.S. troops from Iraq;

2) an end to all U.S. plans for pre-emptive strikes on Iran;

3) Israeli honoring of international law which supports equal rights for all and the Palestinian right of return to homes, properties, villages and cities from which they have been driven since 1948; and

4) an end to political and media labeling as “anti-Semitic” anti-war Americans who speak out for justice for the Palestinians and/or against wars promoted by neoconservatives, pro-Israel lobbyists and Christian Zionists. Three recent examples are accusations against Presbyterian groups urging divestment from companies doing business with Israel and against former CIA analyst Ray McGovern and Gold Star Families for Peace activist Cindy Sheehan, both of whom spoke at Representative John
Conyers’ June 16 Downing Street Memo hearing.

The DC Anti-War Network also initiated the January 21st fifty-strong “March on the Neocons” and the May 23rd seventy-five-strong protest against the AIPAC annual conference at the DC Convention Center. The latter was endorsed by over twenty activist groups nationwide. In 2002 over 1500 activists protested outside the AIPAC annual conference. See relevant calls and photographs of these protests at
http://stopthewarnow.net/protests/

** ENDORSE THIS CALL BY SEPTEMBER 19TH AND BE LISTED ON THE WEB PAGE AND
THE PRESS RELEASE http://stopthewarnow.net/protests/aipacprotest-09-05.html

**GET INVOLVED IN ORGANIZING, SEND OUT YOUR OWN PRESS RELEASE SUPPORTING
THIS PROTEST, OR JUST TELL US YOU WILL BE THERE!