Reference vs Meaning - a reflection by Gerry Hiles 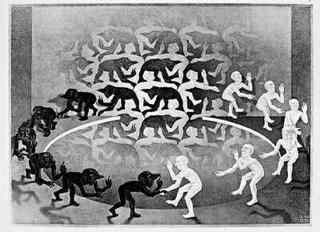 Few would wholly disagree, I think, that we live in a rather Orwellian world in which the "meaning" of many words has drifted, so that whilst one may think that communication is occuring, it might not be, e.g. if you say to someone, "I love you." - meaning I care about you - it could be heard as, "I want to have sex with you."

In this instance the meaning, i.e. the emotional impact of a word, is at stake; but oft-times this isn't so and the question, "What does that word mean?" should be rephrased as, "What does that word refer to?" (or represent, signify, label, correspond to, etc.), because the word "mean(ing)" has itself drifted - rather like "love" - to sometimes signify an inner state (emotion/feeling) and sometimes a virtual object, e.g. the sexual act.

Anyway: to cut to the chase ... which includes that though very many people agree that there is a problem, a lot of them reject dictionaries as being of any help because, it's said, dictionary definitions are circular. And that's true, in the context that if you are really just using a dictionary like a thesaurus, of course all you will find are similes; but if you look to the etymology, then it's a very different kettle of fish.

So let's wade right in with a look at two contentious and/or very woolly words - "democracy" and "society" and, as it were, "deconstruct" them (but not in the manner of the arcane "deconstructionism").

Now all that needs to be asked is whether or not that state of affairs actually exists, or if it would be desirable if it doesn't. So let's begin by recognizing that "people" is a virtual synonym with "population", i.e. it is an all-embracing term, and it is immediately apparent that large sections of "the people" have no say (nor should have any say) in the governance of a country, for instance, e.g. children and teenagers, regardless of many of the latter having a contrary opinion (like I more or less used to have when I was 16 and pontificating about how the world ought to be run).

To this section can be added anything up to 80% of the adult population, some of whom might believe they have a say (whilst most are probably rightly cynical), but who know too little to cast an informed vote ... let alone that there is little difference between political parties: hence the truism, "It doesn't matter who you vote for, you still get a politician.". And a further observation is that one wouldn't want ill-informed people to have much of a real say ... things are bad enough already.

In any event there is no "democracy", never was and never can be. And the reality is oligarchy usually, i.e. olig = few + archy = government, so all the nonsense, from left, right and centre, about "democracy" is mere sophism, propaganda, or simply ignorance of how things really are, e.g. a continuance of European-originating imperialism, as is amply evidenced by the Washington Empire and the rhetoric about "democracy", whilst manifestly really being hell-bent on ruling the world.

And so to "society", which derives from the Latin for "friends". So the simple question is, "Are all of the people with any given geo-political boundary friends?" And the simple, obvious answer is a resounding "NO". Such populations - all that can legitimately be said about them (because there is little or no commonality of substance) - bear no resemblance to tribes, especially, within which everyone was mainly friends with everyone else and virtually everything was had in common, e.g. from the belief-system to the means of sustenance ... so it is, or at least was, legitimate to call such groups of people societies, or communities and indeed nations - as distinct from mere "nationalism", which preaches abstractions and creates a false sense of unity in the service of the oligarchy.

I'll end by just demonstrating "the method" on a couple of other widely misused words.

"Philosophy" is widely used as a synonym for "ideology", "doctrine" and even "dogma", whereas simply taking the word appart reveals what it really refers to, i.e. philo = love of/desire for sophy = wisdom ... when wisdom refers to the form of knowledge which has been tried and tested. Thus "philosphy" is the search for this kind of knowledge and might lead to a system of belief, for instance, but at that point inquiry has ceased, the search being over.

"Psychology" is widely used as a synonym for neurological research, for instance, or behavioural experiments, etc., whereas taking the word apart reveals: psych-e = mind/soul/spirit + logy = knowledge of, i.e. knowledge of oneself/others as essentially emotional, feeling, sensing creatures who ascribe such as the sense of beauty, for instance, to wide ranges of fundamentally superficial objects/appearances ... which is what Socrates/Plato was trying to get at/make clear over two millenia ago, but without the benefits of all of the inquiries which have subsequently been conducted.

So, finally, I am not claiming novelty for "the method" I have demonstrated; but I do hope to have cut through a lot of crap and shared the understanding of, if you like, "the Socratic method" of question and answer which I have been fortunate enough to be able to come by, over many years.