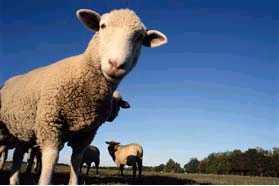 This recent BBC news item tickled my fancy Israelis transplant frozen ovary (the BBC has since amended the title).

The ovary came from a sheep, but the BBC failed to report whether the sheep was Arab or Jewish.

I was reminded of something I read recently by Edward W. Said who, rather un-sheepishly, brought up the vexed problem of the mixing of the Arab-Jewish flocks within in the internationally recognised borders of Israel.

[Edward Said writes] "How many people know the kind of thing suggested by the following incident - namely, the... by-now unconscious adherence to racial classification which pervades official Israeli policy and discourse." (Source material provided and translated by Prof Israel Shahak from an Israeli Journal 'Kol Ha'ir').

"The society of sheep raisers in Israel (an entirely Jewish body from which Arabs are totally excluded) has agreed with the Ministry of Agriculture that a specal sheepfold will be built in order to check the various immunizations on sheep. Which sheep? Jewish sheep in Israel, writes Baruch Bar Shelev, secretary of the sheep raisers' society, in a circular letter to all sheep raisers. In the letter they are asked to pay, toward the cost of the sheepfold, twenty shekels for Jewish sheep. This demand was also received by Semadar Kramer of the secretariat of 'Neve Shalom' near Latron.

Semadar Kramer sent the society of sheep raisers only half of the sum requested for building the Jewish sheepfold because 'Never Shalom' is a Jewish-Arab village, and therefore its sheep are also Jewish-Arab. They also claim that they have no certain knowledge about mixed marriages among sheep, and that lately some difficulties about conversion to Judaism were encountered in their sheepfold."

[Edward writes] "This, one might think, is either insanity or some comic fantasy produced in the imagination of a Swift or Kafka. Jewish sheep? The conversion of Arab sheep to Judaism? Surely these things cannot be real. Such distinctions, however, are part of the system of possessive exclusivism which has been imposed upon the reality by central forces in Israeli society. The system rarely discussed at all in the west, certainly not with anything resembling the intensity with which Palestinian terrorism is discussed."