Visa for the symbol of Abu Ghraib granted! Partial success of the Hunger Strikers 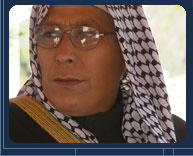 One Step Forward
From the hunger strikers before the Farnesina

A wave of solidarity arrived from all over, as well as the greetings of so many comrades who have supported us morally and materially during these two difficult weeks. This solidarity and affection have given us the strength to resist.

We did not succeed in overcoming the refusal of the government and of Foreign Minister Fini, who was subject to U.S. pressure, to approve visas for six highly respected representatives of the Iraqi people.

On the other hand, we have gained two very important results:
1. We turned back the U.S.-driven campaign to criminalize the organizers, which was aimed at crushing all those who support the Iraqi resistance or consider it legitimate.

2. We started the procedure to allow the entrance into Italy of Haj Ali al-Qaysi, the man tortured in Abu Ghraib prison, who can then take part in a tour of meetings protesting the barbarity of war and to denounce the crimes of the occupiers.

With Haj Ali we pledge, together to all those who have been involved in our struggle, to begin a campaign to expose the truth of the ongoing tragedy that is taking place in Iraq, a campaign that will revive and relaunch the battle for the visas regarding the conference of Chianciano that had been planned earlier ("For an just peace, with the Iraqi Resistance"), a conference that frightened the U.S. government and the Berlusconi-Fini government, so that it can finally take place.

The Conference has been postponed, not cancelled. To the government we say: who laughs last, laughs best.
The next appointment is for October 2 in Rome. Here a large international meeting will take place not only to continue the battle to win visas for the Iraqi representatives, but also to open a place for the anti-war movement that asks for a just peace in Iraq, withdrawal of the occupation troops and full respect for the national sovereignty of that country, without which freedom and democracy are only empty words.

We are not returning to our homes, but we dedicate ourselves to working together with all those who want to fight against this war government, so that Italy can finally become a sovereign country and a place of peace and dialogue, not only with the Iraqi people, but with all those who struggle for liberation from imperialist chains.