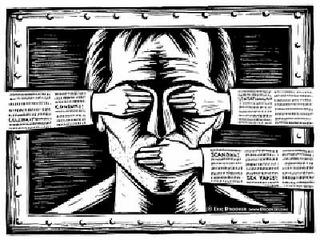 “We will not back down”
Int'l gathering convened
On September 10 the meeting of the organising committee of the international conference in Chianciano “Leave Iraq in peace – support the legitimate resistance of the Iraqi people” took place in Rome. Beside the presidential committee of the Italian Free Iraq Committees delegates from Spain, Turkey, Germany and Austria were present. Following resolution was approved unanimously:

Despite the protest of a very broad front comprising democratic and anti-militarist personalities, movements and parties, despite the hunger strike which is still running, the government of Berlusconi-Fini-Pisanu continues to negate the visas for the exponents of the Iraqi opposition. They thus maintain their pact of subordination to the Bush administration symbolically expressed by the letter of the 44 US congress members.

We have been denouncing this pretension not only as an offence against the resisting Iraqi people and the global public opinion but also as a grave attack on democracy and the Italian constitution.

The closing of the borders for the six Iraqis, although it impedes the holding of the conference in Chianciano “Leave Iraq in peace – support the legitimate resistance of the Iraqi people” as scheduled, will not make us back down: we will continue our struggle in order to make the conference possible to be held in the forthcoming in Italy period with the six renown Iraqi representatives.

Therefore we convene for October 2 in Rome a big international gathering open to all democratic forces ready to fight for ending the imperialist occupation of Iraq, for the principle that resisting foreign aggression in defence of national sovereignty is legitimate (as it is also being stipulated by the very charter of the United Nations), and eventually for the recognition of the resistance as the authentic representation of the Iraqi people.

Meanwhile the hunger strike continues given the fact that the Foreign Minister not even answered the request for visa for Haj Ali, the torture victim of Abu Ghraib. We have been inviting him for a broad European-wide campaign to denounce the war crimes committed by the occupants not only against the resistance fighter but also against common and innocent citizens.

The respect and the consensus we obtained by our struggle does allow us to go ahead in the consciousness that peace in Iraq is not close, that the struggle to force the aggressors to withdraw is a long and protracted one – a struggle which is linked to the one in the West against the anti-terrorist witch hunt and the one to stop the racist criminalisation campaign against the Muslim communities.

Whatever might be their next steps, we are sure that the Iraqi people, thanks to it steadfast Resistance, will gain its right to self-determination which is fundament as without which all other liberties are pure illusion.

This Resistance deserves the broadest and organised international solidarity. To strengthen it we promote the international gathering of October 2 hoping that it will contribute to coalesce all those who have been fighting these years against the infinite war on the side of the oppressed people.