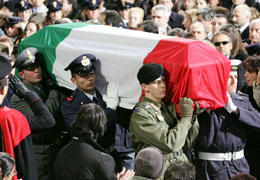 3 March 1983 – 4 March 2005 are two dates that signal the beginning and the end of a project of a life shared. Twenty-two years are few for those who have plans, ideals and values in common; they are few for who remains behind and finds himself overcome in a handful of seconds by an endless nightmare.

It is impossible to forget the evening of 4 March when upon returning home I found some friends and colleagues of Nicola awaiting me. It is a scene that comes to mind frequently to whoever has lived with a functionary of the police in an “operative” position, but one that a person tries to remove out of self defence so as not to be overwhelmed by a paralysing anxiety. With horror I screamed my “NO!” when faced with that which I intuited was the truth, but that none of the persons present was able to confirm for me. And then: “Killed by the Americans, an accident… no one knows what has happened.”

Numbed since that evening, I continue to always ask myself the same question, “Why?” even more now than I did after the contrasting results reached by the investigative group comprised of Italians and Americans, entrusted with the task of examining the dynamics of the events which took place on 4 March.

An investigation which by all intents was supposed to have been made together yet, in the end, brought about the publication of two separate rapports. The Italians were given many restrictions and limitations. The prohibitions to the development of the investigations were above all derived form the exclusive application of the United States norms Army Regulation 15-6, that disciplines the procedures and the modalities for the investigation in the milieu of the US Army, and that, as is clearly exhibited in the Italian rapport, had put severe limits on the investigation when compared to that which is foreseen by Italian law for analogous activities. For that which concerns, for example, the manner of witness acquisition, the questions to the witnesses already heard could not be reiterated and direct confrontation was impossible. Not to mention that the questions of the Italian representatives could only be made to the witnesses through General Vangjel, the United States official who had been assigned to the case, already before the arrival of the Italian delegation.

An ulterior element of great limitation for the joint investigation was the lack of “freezing” of the place surrounding the shooting, as had been declared by the American soldiers themselves, was completely cleaned and altered in such as way so that it did not allow the Italians present in Baghdad that evening of 4 March to see the place itself. Not even later, during the work of the joint Commission, was it possible to reconstruct the scene of the “crime”, because the American authorities considered it “Inopportune”, for the reason of the stressed constant and grave danger that is present in proximity of the place of the “event”, even a nocturnal on-the-spot inspection. In such, there is no certainty of the reconstruction of the dynamics of the facts. All of this has not, consequently, allowed a careful analysis in the place of its occurrence, for that which is clear from the results of the expertise made in Iraq on the vehicle – as emerges from the Italian Rapport – it was considered to not have had that decisive of a probatory relevance.

And still: the removal and elimination of the bullet shells, the lack of preservation of the weapons and the ammunition of the unit involved in the fact… and again, the examination of the car, at this time property of the State of Italy, only after two months’ time had already passed…

It is a difficult, painful and agonising path for whoever has to face the tragic loss of his companion but it becomes even worse if this happens in such a context and with this modality.

Nicola was a functionary of the SISMI, an intelligence agency which was allied with the United States, and he acted in the name of and on behalf of the Italian State. He was not a Rambo or a 007 with a license to kill, but a man who in other delicate operations had demonstrated that he was in possession of the qualities of negotiation even with the most fundamentalist elements in the Middle Eastern context. Blessed with grand intuition, reflexive and a great observer, he faced situations with lucid rationality, with noteworthy self-control and with strong determination. Aware of the risks hidden in the tasks he was given, he suggested prudence to his collaborators and weighed the costs and benefits of each option. Nicola, even in his previous career in the Police force, had always set his style as discussion with others and not argument or conflict, “to prevent, not to repress”, he used to say. Even in the relationship with his collaborators, he preferred the policy of “consensus” rather than that of “giving orders”, of calm but authoritative affirmation of his opinion, but not authoritarian, even it if was always he himself who assumed full responsibility for his decisions. A style that, often, confused his adversaries but which created cohesiveness and reinforced the identity of the Group that worked by his side. A particular thought goes to “Nicola’s Team”, to the Caliparians, as some have identified them within the Services and perhaps just to stress the differentiation of his human and working approach.

It was certainly known to the Americans that his participation and collaboration even in the other series of kidnappings which happened in Iraqi territory and even in this case of the kidnapped journalist, even in absence of express formal communication to the USA Military Command of the motive of the mission, Nicola and his team, as they had many other times, requested the authorisation to land in the Baghdad airport, to be housed at Camp Victory and supplied with identification badges and weapons, for their successive movements in the Iraqi capital.

Nicola did not only complete his mission, the liberation of Giuliana Sgrena, but he also sacrificed his life to protect her from “friendly fire”, and precisely for the respect of that flag which draped his casket upon return from Baghdad, I continue to ask with force and determination the truth on what really happened and to throw light on the responsibilities of those who were directly or indirectly the cause of his death.

It is not possible to have peace if there is no justice.