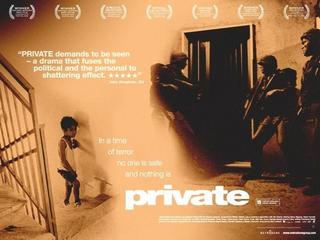 From Corriere della Sera (translated by me)

No Oscar for Saverio Costanzo's Film

ROME - The Film by Saverio Costanzo, "Private", will not be in the running for the Oscars. The film, in fact has been excluded by the Academy in the category of Best Foreign Film. Anica and Api (two production companies) have made public that "with great disappointment we have received a letter from the Academy of Motion Picture Arts and Sciences, dated 12 October, wherein the Academy itself declares that the film 'Private', although being of Italian production, and by Italian authors and director, does not have the requisites to participate in the category of Best Foreign Language Film, because it was not spoken even partially in the Italian language. The film by Saverio Costanzo - continues the letter from the Academy - can compete in the Oscars in all the other categories".

The Academy has asked the Selection Committee to propose another film that has the right requisites to compete in the category of Best Foreign Language Film, and the Committee must decide as soon as possible (La Bestia nel Cuore, by Comincini was selected... a drama about incest, was selected by the way) among the films that have already been in the running, as the substitute title. The second place film in the selection was "Manuale d'Amore" by Giovanni Veronesi. Veronesi's film is being projected in these days in Los Angeles, since this is one of the conditions that must be met in order to participate in the competition.

Now, I ask you, I ask myself... years ago, didn't Chariots of Fire win as a Foreign Language Film? So is it Foreign or Foreign Language? And where is it indicated that it must be done in the language of its director? That is insane!! Was Little Buddah by Bertolucci in Italian? Zabrieski Point? What is going on here???? Have all films that have been submitted been done in the language of the country of origin? I find this scandalous, and for me, there is a political reason behind it. I am not that well versed in cinema, so if anyone can help me with the research, I would be most grateful.