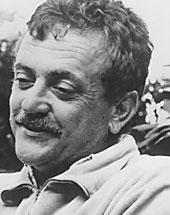 On Peacepalestine Documents you can read the full transcript of a fascinating interview by Kurt Vonnegut for PBS.

Here is a snippet, but the entire thing is well worth the read!!

DAVID BRANCACCIO: But you're saying you don't see senior political figures really, anybody representing the interests of people who are struggling?

KURT VONNEGUT: No, are not representing the American people. And, so there are people who made a hell of a lot of money one way or another. Making it during the war, incidentally. As you know, maybe the war is a bad idea. But some people are making a ton of money off of it. And they want to hang on to whatever they've got. And so they bank roll political campaigns for both Republicans and Democrats. Look, we're awful animals. We can start with that. You know, it's a whole human experiment, if that's what we are.

KURT VONNEGUT: Look, we after two World Wars and the holocaust and the nuclear bombing of Hiroshima and Nagasaki, and after the Roman games and after the Spanish Inquisition and after burning witches, the public-- shouldn't we call it off? I mean, we are a disease and should be ashamed of ourselves.

And so, yeah, I think we ought to stop reproducing. But since we're not going to do that, I think the planet's immune system is trying to get rid of us.