Iranian comments on Israel in context 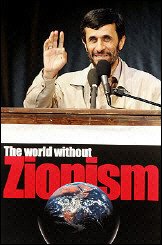 An article in Tehran Times explains the context of the Tempest in a Teapot of the Ahmadinejad speech.

A brouhaha over nothing
By Hassan Hanizadeh
The remarks of Iranian President Mahmud Ahmadinejad at the recent “A World without Zionism” conference, in which he actually underlined the necessity of putting an end to all Zionist ways of thought, was met with hasty reactions by some pro-Israeli countries.

At the conference, President Ahmadinejad mentioned an old issue often brought up by the revolutionary forces in the early days after the victory of Iran’s Islamic Revolution in 1979, which highlighted the need to annihilate Israel.

Although the Iranian nation has shouted slogans against the Zionist regime since 1979, these slogans have never meant a physical confrontation with the Israel but rather referred to the need to wipe out all Zionist ways of thought, which never recognize anyone else’s right to live freely.

A glance at the actions of Zionism over the course of the 20th century shows that it is one of the most dangerous and anti-human movements after Nazism.

The Zionist movement, with its “from the Nile to the Euphrates doctrine”, has always tried to expand its territory through massacring innocent Palestinians and expelling them from their homeland.

From the middle of World War I until the end of World War II, the leaders of the Zionist movement slaughtered thousands of innocent Palestinians while international organizations remained silent about all their horrific crimes.

The occupation of Palestine, the use of force and violence in dealing with the Palestinians, and the moves to deprive the Palestinian nation of their inalienable rights are all rooted in the ideology of the Zionist leaders, which has become a serious threat to humanity.

Therefore, when one talks about the annihilation of Israel, it does not mean the genocide of the Jewish people, but rather a non-violent confrontation with Zionist schools of thought, which are endangering the Middle East and the entire world.

Millions of Muslims all over the world are in consensus that Zionism is the enemy of humanity.
Israel is currently threatening world peace and security with its horrible nuclear arsenal. Therefore, international organizations and Western countries should seek a solution.

The fact that Israel possesses nine facilities for the production of fission nuclear weapons as well as hydrogen and neutron bombs is a real threat to the world and particularly the critical Middle East region.

At the same time, over the past two years, the Zionist regime has explicitly threatened the Islamic Republic because it possesses nuclear installations meant for peaceful purposes.

Although the Islamic Republic is extremely reluctant to raise political tension in the pressure cooker of the Middle East, it feels duty-bound to warn the world of the existence of Israel’s nuclear arsenal.
These warnings should be seriously considered by the international community, and especially the West, because the continuation of the current situation, i.e. the mass production of prohibited weapons by the Zionist regime, will eventually trigger an arms race in the Middle East that will cause a global crisis.
Indeed, it is odd that the world has remained silent about Israel’s refusal to sign the nuclear Non-Proliferation Treaty (NPT) but opposes Iran’s civilian nuclear activities.

Unfortunately, instead of changing their stances toward regional incidents and adopting a fair attitude toward developments in the Middle East, the United States and other Western countries are actually trying to raise a brouhaha over a single statement by an Iranian official so they can divert attention from the ever-increasing crimes the Zionists are committing against the innocent Palestinians.

Another article, again from Tehran Times is even clearer:

"Over the past 60 years the Zionist regime and the United States have been trying to wipe Palestine off the map in view of the silence of the United Nations and the support of superpowers," Haddad-Adel said while addressing the Majlis open session.

"The Qods Day rally showed the Iranian nation's political vigilance and great aspiration, and was held massively this year due to the sensitivity of the Palestinian issue under the current circumstances.
"The Iranian nation told the world that Muslims will not yield to conspiracies.

"The Zionists provoke a press uproar on the threshold of Qods Day each year to overshadow the event. This year, they used President Mahmoud Ahmadinejad's remarks as a pretext to turn it into controversial news," he said. Addressing thousands of students at a conference dubbed "World Without Zionism" here Wednesday, President Ahmadinejad recalled a famous statement by the late Founder of the Islamic Republic Imam Khomeini about the Zionist regime, which said, "the Qods occupier regime should be eliminated from the surface of the earth."

The speaker pointed to the United Nations protest at Ahmadinejad's remarks saying, "We ask the United Nations if the Zionist regime has ever abided by the UN regulations? "The Zionist regime which has hundreds of nuclear warheads refuses to sign up to the nuclear Non-Proliferation Treaty (NPT). Are the Palestinians' assassination, massacre of the defenseless nation and demolition of houses and farms in line with UN regulations?

"The Islamic Republic has no problem with Jews throughout the world. It is against cruelty and injustice," Haddad-Adel added.

"In fact they (the Zionist regime and the United States) intend to eliminate the Palestinian nation off the world map but the Iranian nation defends the rights of the oppressed Palestinians," he said.