On a mission from God 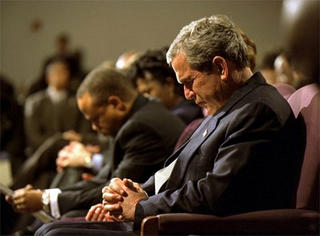 “A war would be a defeat for humanity and would be neither morally nor legally justified,” the Pope told Bush in a papal message delivered by a special envoy. “It is an unjust war.”

This forced John McLaughlin, host of the syndicated McLaughlin Group and a longtime supporter of both conservative and Republican causes, to have second thoughts.

“The Pope is saying an invasion of Iraq would be criminal - A statement that strong cannot be ignored,” McLaughlin, who is also a former Jesuit priest, said.

And now we hear that the American President George W. Bush received a divine message telling him to invade Iraq. But a couple of days ago Deputy Prime Minister of Palestine Nabil Shaath quoted George W. Bush as saying that God told him to invade Iraq and attack Afghanistan, as part of a divine mission to bring peace to the Middle East, but said he did not take the American President’s comments literally.“But we never thought that he literally had God speaking to him,” Shaatha said on Friday.

Bush made those remarks during a meeting with Palestinian leaders more than two years ago, according to a
new BBC series. “President Bush said to all of us: ‘I’m driven with a mission from God. God would tell me, ‘George, go and fight those terrorists in Afghanistan’. “And now, again, I feel God’s words coming to me, ‘Go get the Palestinians their state and get the Israelis their security, and get peace in the Middle East’. And by God I’m gonna do it’,” Shaath quoted Bush as saying.

Bush's “global war on terrorism” killed thousands of Iraqis and Afghans, including women and children - two sovereign nations have been destroyed - how can this be called a divine mission?

How can God ask a man to destroy other countries and kill their people? Bush lies so often and in so many different ways that it’s become difficult to keep track of his lies. But the President’s big speeches usually have little impact on public opinion. A recently conducted survey showed that Evangelical Christians, Republican women, Southerners and other vital groups in the American President’s political coalition have become
increasingly worried about the his policy and performance. Growing dissatisfaction among members of Bush’s government could be seen as a troubling sign for a White House already struggling to keep the Republican base from slipping over various issues, among which are: Supreme Court nominee Harriet Miers, Gulf Coast spending projects, immigration and others. Bush's approval rating is softening among groups that previously formed a strong front against his opponents. Only 33% white evangelicals “strongly approve'' of the way Bush is doing his job, down from 49 percent from findings in January. The number of Southerners who approve of Bush's performance dropped from 32 percent in January to 22%, according to AP poll.

From all the adults surveyed in the Oct. 3-5 AP-Ipsos poll, 66% believe the country is headed in the wrong
direction, while only 28% believe otherwise. Bush's overall approval rating among the 1,000 adults surveyed remains at a low of 39 percent, that includes people who said they strongly approved, somewhat approved or leaned toward approving the president's job performance.

"Politically, this is very serious for the President," said James Thurber, a political scientist at American University. "If the base of his party has lost faith that could spell trouble for his policy agenda and for the party generally." 10/9/05