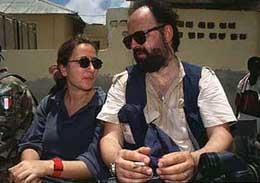 In support of Giorgio and Luciana Alpi against the action for libel filed by Taormina
We are appealing to the sensitivity and to the passion of those who still believe that some sort of truth can come out of the death of Ilaria Alpi and Miran Hrovatin, journalists of Italy’s TG3, killed in Mogadishu, Somalia on 20 March 1994.

Just yesterday the news arrived, diffused through the press agencies and by “Associated Reporters International”, of the letter written by Parliamentarian Carlo Taormina to the President of the Italian lower house of Parliament Pierferdinando Casis, containing the threat of an action of defamation against the parents of Ilaria Alpi, Giorgio and Luciana, guilty – according to Hon. Taormina – of having “dared” to criticise the method and the procedure that the Commission’s president Taormina applies to the work of the commission. Criticisms that we ourselves make our own from this moment, assuming complete responsibility for such a view.

The threat of a lawsuit against Ilaria Alpi’s parents and of their attorney Domenico D’Amati, is just the latest act of a ruthless politic carried forth by Hon.Carlo Taormina within the Parliamentary Commission that he presides. It is a politic that has to this day brought as the sole result after two years of work that of indicating in the journalists who had been distanced as consultants to the Commission as “derailing the inquiry”, other journalists who were, correctly, considered to be the historic memory of the “Alpi case” were labelled as working at “concealing”, still others, colleagues of the TG3 of Ilaria Alpi reduced to “polluters”. And since yesterday, even her parents are labelled as “defamers”.

It is politics without scruples that has placed the Parliamentarian Commission on the road to a conflict between power of the State with the refusal to respect some dispositions of the Magistrate in occasion of some delicate operative and procedural practices. And for this reason the Public Prosecutor of the Republic in Rome, with an initiative that has been defined as “grotesque” by the president of the Commission Carlo Taormina in the letter sent to Hon. Pierferdinando Casini, has opened an investigation of the discovery at Mogadishu (eleven years after the double homicide…) of the auto indicated as that where the two Italian journalists lost their lives. A discovery that, as other moments of the work of the Commission, leaves more than a few doubts and perplexities.

We appeal to the general public, to associations, movements and to all the world’s citizens who care about truth and about the respect of the necessary procedures to reach the truth. We are making this appeal so that everyone can embrace in solidarity the figures of Giorgio and Luciana Alpi who have dedicated these eleven years to the research on the truth of the execution which was committed against Ilaria Alpi and Miran Hrovatin.

We are making this appeal to those who still believe that it is possible to find and identify the instigators of the double homicide and the ambient in which it had been ordered to assassinate the two journalists.

We are making this appeal to the Parliamentarians of the Centre-left so that they use every means and every instrument so that they sign this appeal and that they make it arrive within the Parliament and to the president of the lower house, Hon. Casini.
We are making this appeal to all journalists, to those who work in the world of information so that they do not lower their gaze on the dramatic event of the death of Ilaria Alpi and Miran Hrovatin, so that they do not accept as sufficient such a “simple” truth as that uncommonly and publicly enunciated by Hon. Carlo Taormina, even before the official conclusions of the work of the Parliamentary Commission, which seeks to indicate as the cause of death of Ilaria Alpi and Miran Hrovatin something very similar to an accident: “a failed robbery or kidnapping attempt…”.

The threat of a lawsuit for defamation against Giorgio and Luciana Alpi profoundly fills us with indignation, even for the form which has been artfully selected to diffuse it, it outrages us as citizens who still believe in the value of politics and democratic instruments for politics to arrive at the truth, it enrages us because it is an attempt to delegitimise the work and the commitment of all of those who for eleven years have battled, without any personal gain, to seek to unmask the instigators of the execution of Ilaria and Miran. Wherever they may be, within or beyond Somalia.

We who are signing this appeal will not be content until the truth is had, until all of the dynamics that have brought about this double homicide are made clear. Until we read black on white the names of the instigators.

(for those who do not read Italian, it is written Firmare l’appello in red. Underneath this is a link to the signatories).

Thank you for taking the time to read and sign this appeal. It is an important matter for many of us in Italy, and we want the world to remember what happened in Mogadishu, and to find out why an investigative reporter who had discovered some very uncomfortable relationships between the Italian Cooperation in the Third World, politicians in Italy and abroad, the war in Somalia and the disposal of toxic waste in regions of Somalia was executed with a gun to her head, and the material of her cameraman taken. We are outraged that her parents, in their quest for justice are treated as common delinquents.