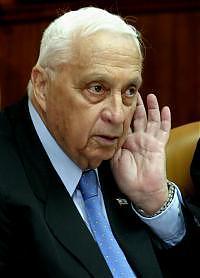 A somewhat insolent but nonetheless honest comment was published in Israeli daily Haaretz in late September. It discussed Israel’s need of support (or rather its lack of), from the outside world. The headline said everything that needs to be said: “Israel needs no one but itself.”

The author Alon Liel is a former director general of the Israeli Foreign Ministry, so you can presume he knows what he’s talking about. Liel concludes that:

“The past five years, the years of the Al-Aqsa Intifada, have taught an important lesson about Israel's situation in the international arena: Israel has in effect become immune to international pressure. At the beginning of the 21st century, the Israeli-Arab conflict became more of a national problem of Israel and some of its neighbors and less of an international problem. […]

[P]eople who still believe that the Israeli-Arab conflict will in the end be solved only as the result of international pressure can forget about it.” [1]

The treatment of the Palestinians has created problems for Israel. Following the outbreak of the Intifada (Arab term for ‘uprising’), Israel’s relations with Muslim countries have become even worse. More importantly, Europe and the United States have become unhappy with the Israeli ravaging.

The Europeans have condemned the construction of the Wall and reiterated the need of establishing a Palestinian state in the occupied territories. The European standpoint on the conflict can, after all, be said to be clear. But has it forced Israel to impose a policy of appeasement, or any other concessions for that matter? Not really. The Europeans have no problems opening their mouths. They see what Israel is doing, but only use words to condemn it, no taking action is in sight.

Remarkably, the Israelis behave with such brutality that even the Americans have reacted. When Secretary of State Condoleezza Rice visited Israel prior to the evacuation of the Gaza pullout, she repeatedly declared that Israel must go forward with its outspoken intention of evacuating the 8,500 Jewish settlers in the Gaza Strip. The U.S. support of Israel has been determined to be the single biggest factor behind the negative attitudes toward U.S. policies in the Arab world. The Americans are aware of this and thus have been after Israel to make withdrawals for a long time. It isn’t until now they’ve actually succeeded in doing so. But despite Israeli policies having a negative impact on U.S. interests in the region, it continues to remain Israel’s perpetual patron. Washington is still referred to by the American writer and Radio Host Jeff Blankfort as “Israel’s most important occupied territory.”

After the disaster in New Orleans, Zionists feared the high material costs might lead to cuts in the never-ending billions the American taxpayers are forced to assist Israel with year after year. Except for domestic catastrophes, no Israeli action seems to have an affect on the American support - Washington remains Zionist occupied territory.

Bush and Rice pressuring their Israeli counterparts would not be possible if Bush wasn't serving his second and last term as President, meaning he does not have to suck up to powerful lobby groups to stand a chance at the upcoming presidential election.

“Sometime in the late 1950s, that world-class gossip and occasional historian, John F. Kennedy, told me how, in 1948, Harry S. Truman had been pretty much abandoned by everyone when he came to run for president. Then an American Zionist brought him two million dollars in cash, in a suitcase, aboard his whistle-stop campaign train. 'That's why our recognition of Israel was rushed through so fast.' As neither Jack nor I was an antisemite (unlike his father and my grandfather) we took this to be just another funny story about Truman and the serene corruption of American politics. [...]

[No] other minority in American history has ever hijacked so much money from the American taxpayers in order to invest in a ‘homeland’. It is as if the American taxpayer had been obliged to support the Pope in his reconquest of the Papal States simply because one third of our people are Roman Catholic. Had this been attempted, there would have been a great uproar and Congress would have said no. But a religious minority of less than two per cent has bought or intimidated seventy senators (the necessary two thirds to overcome an unlikely presidential veto) while enjoying support of the media.” [2]

As noted earlier, Liel is straightforward in his analysis: “If Israel does not establish the Palestinian state, it will not arise.”

Annexing the Gaza Strip turned out to be an impossible task due to the demographic situation. Filling the Gaza Strip with enough Jews to colonize it, with a basis of 8,500 Jews and 1.3 million Palestinians, was an impossible task. Historian Benny Morris was perfectly right when he said that Ben-Gurion’s failure to expel all Palestinian in 1948 is something Israel will have to live with. Pursuing the plan is no longer possible. The Zionists can complete the ethnic cleansing in Jerusalem, but not in the West Bank and Gaza. This is an inevitable fact Sharon is aware of.

The 78 per cent of the land, which Arafat decided to adjudge Israel in 1993, was not enough for the Zionists. They demanded more. There is only one slight problem: the Palestinians are not prepared to settle for less than their 22 per cent. And why should they?

Apart from a too low percentage of the arable soil, the Palestinians will never accept a deal that doesn’t give them East Jerusalem, the capitol and heart of the Palestinian state-to-be. Moreover, Prime Minister Ariel Sharon speaks for all Zionists when he time after time assures that the Israeli government ”will not negotiate Jerusalem” and describes the city as ”the Israeli capital, which is united and indivisible for eternity.” [3] Just by openly declaring Israel “will not negotiate” this issue, Sharon made it clear that all peace negotiations are more or less meaningless, since neither part is willing to make concessions.

However, as the considerably stronger part, Israel has an advantage. The Zionists are able to impose their ‘peace deal’ by force, independent of what the Palestinians think (or anyone else for that matter).

This plan was well formulated in words by Sharon: “There's no need to talk, we need to build, and we're building without talking (about it.).” [4]

This explains the construction of the Apartheid Wall that is wriggling itself through the West Bank. Following the route of the Wall, it is obvious that Sharon is trying to create a Greater Jerusalem. Saying Israel needs to move unilaterally due to Palestinian lack of compromising and unwillingness to deal with terrorism, while being hailed as a ‘man of peace’ for leaving Gaza, Sharon is setting new boundaries that leaves the Palestinians less than 15 per cent of the land.

While cutting the West Bank in half by the eight meters (25 feet) high and 650 kilometer (400 miles) long Wall [5], leaving close to half the West Bank on the Israeli side, the dream of a Jerusalem without Palestinians is about to be fulfilled. According to B’Tselem, after Annexing East Jerusalem in 1967,

“Israel conducted a census in these areas, and granted permanent residency status to residents in the annexed areas present at the time the census was taken. Persons not present in the city for whatever reason forever lost their right to reside in Jerusalem. Permanent residents were permitted, if they wished and met certain conditions, to receive Israeli citizenship. These conditions included swearing allegiance to the State, proving that they are not citizens of any other country, and showing some knowledge of Hebrew [while Israeli Jews are permitted to hold double or even three citizenships - without knowing a word of Hebrew /KL]. For political reasons, most of the residents did not request Israeli citizenship. […]

Unlike citizenship, permanent residency is only passed on to the holder's children where the holder meets certain conditions. A permanent resident with a non-resident spouse must submit, on behalf of the spouse, a request for family unification. Only citizens are granted the right to return to Israel at any time.” [6]

Today it is evident that not applying for citizenship was a big mistake. It is far from well-known that close to half the 450,000 Jewish settlers live in Eastern Jerusalem. Since taking control over it, Israel has constructed some 90,000 housing units for Jews only. Not only are Palestinians denied access to the Jewish settlements, they are also categorically denied building permits.

Moreover, though they are not Israeli citizens, East Jerusalem Palestinians pay taxes to the Israeli state as if they were “full-fledged” citizens. “The Jerusalem Municipality has about 40% of its income from Arabs, but spends about 5% on us,” East Jerusalem resident Hisham al-Bakri told Aljazeera. [7]

The Israeli Committee Against House Demolitions (ICAHD) estimates that another 25,000 housing units would have to be built for Palestinians to meet the demand. [8] Considering about 225,000 Palestinians are living in the city, a shortage of 25,000 housing units is an enormous problem they can do nothing about. And if a Palestinian, who has a right to permanent residency status, decides to move out of Jerusalem, he risks losing his permanent residency and thus forever his right to reside in his home town. Since he lacks Israeli citizenship, he is not allowed to reside on the Israeli side of the Green line either. The remaining option is moving to the West Bank, Gaza or – as the Zionists are hoping for – leaving the country.

This Apartheid policy is nothing but ethnic cleansing. It is implemented to create a 75 per cent Jewish majority in East Jerusalem, making the entire city ‘Jewish’ for all of the future. If this is allowed to continue for another couple of years, Jews will outnumber non-Jews in the Eastern part of the Holy city (today, the Palestinians outnumber Jews by 45 to 55 %). In total, “the Arabs make up a third of the Jerusalem population, but only have access to 7% of the urban land,” writes ICAHD.

You can say whatever you want about Sharon, but he is not stupid. His critics on the Zionist right just haven’t understood his plan yet – that’s why they attack for the Gaza evacuation. But when they realize the Jewish state will end up with maybe as much as 90% of the land, they will have to praise him as the true Zionist who came up with the final solution to the Palestinian problem.