Sharon's One and Three Quarter States 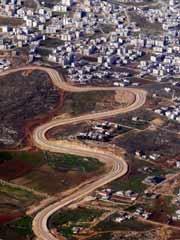 thanks Nancy for this:
An excerpt from The Guardian Comments

"....the ball is now in the Palestinians' court. Under the internationally endorsed road map, the next step is for the Palestinians to put their own house in order, starting with a crackdown on terrorism.

If that were to happen, then Israel might make a further move. Revealingly, Gilady cites the unilateral disarmament steps taken by Mikhail Gorbachev, which paved the way for a mutually agreed arms pact later. "When you act unilaterally, it doesn't stay unilateral," he says. In other words, Israel moves first on Gaza. Then Abbas stabilises the PA. Then Israel will act again. Not a peace process exactly, but a series of one-sided moves: call it sequential unilateralism.

Under that logic, what would Israel's next act be? In the past few days, the Israeli press has been bubbling with hints from key officials at further unilateral pullouts, this time from the West Bank. The scenario seems to be that Sharon sits tight for now, sees off Bibi, fights, wins an election next year - and then stages a series of mini-disengagements. Dr Gary Sussman, an analyst at Tel Aviv University, says the map for those withdrawals is already laid out. "The fence is the border," he says, confident that Israel would pull back, more or less, to the line traced by the wall, or security barrier, it has built through the West Bank. That would entail dismantling a few isolated settlements - and keeping the large settlement blocs.

Such a move would see Israel out of, perhaps, 50% or 60% of the West Bank. Combined with Gaza that would represent the de facto Palestinian state, promised by the road map and now routinely demanded by George Bush, Tony Blair and everyone else.

The old guard of Palestinian leaders, including Abbas, are said to be deeply depressed at this prospect. For such an entity would leave them no access to Jerusalem and would represent substantially less territory than the Clinton parameters promised in December 2000. It would not be the two-state solution they sought for two decades but, says Sussman, something less: "A one and three-quarter state solution."

What's more, Sharon would make this move and win not just international acceptance but praise. The Gaza withdrawal won plaudits from the UN and EU; even Pakistan broke Muslim ranks to start a diplomatic engagement with Israel last month. If there were to be more pullouts in the West Bank, Sharon would be a hero once more. There would be no pressure on him; it would all be on the Palestinians, who would rapidly be cast as grudging and difficult for not receiving these chunks of the West Bank with gratitude.

No wonder the likes of Saeb Erekat and Hanan Ashrawi are said to be glum. They must realise that in the new game of sequential unilateralism they are being outplayed by an Israeli prime minister who is proving a far cannier strategist than anyone expected. They should avoid watching Elusive Peace; it will only make their moods darker. There they will see how much better they might have fared under the old game.

Clinton recalls a proposal he made in late 2000 that would have split Jerusalem and given the Palestinians sovereignty over the upper Haram al-Sharif, with Israeli control over the lower Temple Mount. "Who could accept this?" says Arafat, from the grave. Now his people may have to brace themselves for accepting much less.