what Gandhi had to say about Zionism 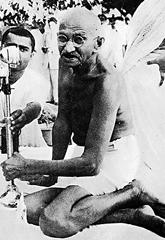 "The cry for the national home for the Jews does not make much appeal to me. The sanction for it is sought in the Bible and the tenacity with which the Jews have hankered after return to Palestine. Why should they not, like other peoples of the earth, make that country their home where they are born and where they earn their livelihood? Palestine belongs to the Arabs in the same sense that England belongs to the English or France to the French. It is wrong and in-human to impose the Jews on the Arabs. What is going on in Palestine today cannot be justified by any moral code of conduct. The mandates have no sanction but that of the last war. Surely it would be a crime against humanity to reduce the proud Arabs so that Palestine can be restored to the Jews partly or wholly as their national home.

The nobler course would be to insist on a just treatment of the Jews wherever they are born and bred. The Jews born in France are French in precisely the same sense that Christians born in France are French. If the Jews have no home but Palestine, will they relish the idea of being forced to leave the other parts of the world in which they are settled? Or do they want a double home where they can remain at will? This cry for the national home affords a colourable justification for the German expulsion of the Jews.

I am not defending the Arab excesses. I wish they had chosen the way of non-violence in resisting what they rightly regarded as an unwarrantable encroachment upon their country. But according to the accepted canons of right and wrong, nothing can be said against the Arab resistance in the face of overwhelming odds.

Let the Jews who claim to be the chosen race prove their title by choosing the way of non-violence for vindicating their position on earth. Every country is their home including Palestine not by aggression but by loving service. A Jewish friend has sent me a book called The Jewish Contribution to Civilization by Cecil Roth. It gives a record of what the Jews have done to enrich the world's literature, art, music, drama, science, medicine, agriculture, etc. Given the will, the Jew can refuse to be treated as the outcaste of the West, to be despised or patronized. He can command the attention and respect of the world by being man, the chosen creation of God, instead of being man who is fast sinking to the brute and forsaken by God. They can add to their many contributions the surpassing contribution of non-violent action."
SEGAON, November 20, 1938 Harijan, 26-11-1938 (Vol. 74, pp. 239-242)

"The 1937 Calcutta meeting of the All India Congress Committee (AICC) "emphatically protested against the reign of terror as well as the partition proposals relating to Palestine" and expressed the solidarity of the Indian people with the Arab peoples' struggle for national freedom. The Delhi AICC of September 1938 said in its resolution that Britain should leave the Jews and the Arabs to amicably settle the issues between the two parties, and it urged the Jews "not to take shelter behind British Imperialism."

"Famous Jewish pacifists, Martin Buber, Judah Magnes and Hayim Greenberg, who otherwise admired Gandhi, felt "highly offended by Gandhi's anti-Zionism" and criticized him for his lack of understanding of the spirit of Zionism."

"As mentioned earlier, Gandhi refused to view the Zionist "hunger" for land in Palestine as a right. Gandhi wrote on 7 January 1939 the following in response to an editorial in the Statesman, "I hold that non-violence is not merely a personal virtue. It is also a social virtue to be cultivated like the other virtues. Surely society is largely regulated by the expression of non-violence in its mutual dealing. What I ask for is an extension of it on a larger, national and international scale."

"His opposition [to Zionism] remained consistent over a period of nearly 20 years and remained firm despite skilful and varied applications to him of that combination of pressure and persuasion known as lobbying, of which the Zionists are past masters."