Why did they eliminate "Private"??? (UPDATED) 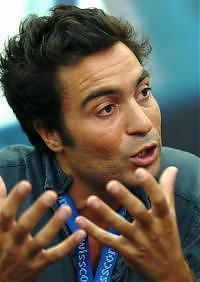 Just this morning, I was reading a paper in a bar, so so far, there is no online information about this thing, which to me is scandalous. I am currently investigating, but.....

Saverio Costanzo's film PRIVATE, which was selected to represent Italy in the Academy Awards with a four-fifths majority by the panel of critics, film-makers and film producers, none of which had films in the running, was pulled from the competition. It won the prestigious Locarno Film Festival award for the Best Film. It is a film that has been considered extremely well made. Perhaps it never would have made the top five films to run for the Oscars, but the fact that it was selected with such a wide consensus does say something about it.

Well, today, they have decided that it can't run in the category "Best Foreign Language Film", because it is not in Italian! Amazing. An Italian director, an Italian producer, an Italian writer.... and it must be excluded because it takes place in Palestine!? I promise to get to the bottom of this and keep you informed. I will present this great film and hope that the jury reverses its decision, or at least we find out if there have ever been other Foreign Language films excluded because they were set in countries other than the country the film is from. How provincial... or is there something else underneath all of this??? I will keep you informed.

The official site http://www.privatethefilm.com/ still has it listed as the candidate. The producer of the second place film of the Committee had withdrawn his film in protest. (There are still some decent people in the world with a bit of morals, so hats off to Dino de Laurentiis and a big HISS to Cristina Comencini).

The Academy of Motion Picture Arts and Sciences (AMPAS) has notified Italy’s Oscar selection committee that their nomination of “Private” is ineligible to compete in the Best Foreign Film category in the Academy Awards of 2006 because of the film’s lack of an Italian language. Although “Private” was directed, produced and filmed partly in Italy, it cannot be considered an “Italian” foreign film because of its lack of an Italian language spoken by the main characters. According to Rule 14 governing the Special Rules for Best Foreign Language Film Award of the 78th Annual Academy Awards, “The recording of the original dialogue track as well as the completed film must be predominantly in an official language of the country submitting the film except when the story mandates that an additional non-English language be predominant. Films involving subcultures that speak a non-English, non-official language may qualify if their subject matter concerns life in the submitting country.”

(I repeat, Kapò was NOT originally recorded in Italian. My copy is dubbed into Italian. The Battle of Algiers was DEFINITELY not even dubbed into Italian, it is in French, Arabic and a few words of English... both films ended up in the top five Academy selections - thecutter)

“Private,” which chronicles the occupation of a Palestinian home by Israeli forces, is spoken in Arabic and Hebrew, disqualifying it from consideration. The Academy has given Italy’s selection committee, headed in part by Bernardo Bertolucci, fifteen more days to elect another film for consideration. Nominations for all categories will be announced on January 31, 2006.

SIMILARITIES TO DIVINE INTERVENTION: Palestine Film Fest
Saverio Costanzo's “Private,” shown in 2005 at CPFF, has been elected by Italy to represent the country in next years Academy Award for “Best Foreign Film” category. The film, hailed in Italy for its "optimistic" representation of the Israeli/Palestinian conflict, stars Palestinian actor/director Mohammed Bakri and has been traveling the film festival circuit. “Private” won the top prize at Switzerland’s Locarno Film Festival and is slated to be released in the US on November 11, 2005.

The press is paying much attention to Italy’s choice for the Oscar, chosen by an Italian committee headed by Bernardo Bertolucci. The last time a Palestinian film was associated with the Academy in 2002, a dispute ensued. Elia Suleiman’s “Divine Intervention” raised controversy in the movie industry after Lorenza Muñoz’s December 14, 2002 article in the Los Angeles Times. According to Muñoz, the producer of “Divine Intervention,” Humbert Balsan, asked the American Motion Pictures of Arts and Sciences (AMPAS) executive director Bruce Davis whether the film was eligible for best foreign film. Davis responded that Palestine was not a country recognized by the Academy. Following such information, the film's distributor, Avatar Pictures, did not submit “Divine Intervention” for consideration.

When “The Village Voice” contacted AMPAS in 2003, they commented that the Academy had not made a decision whether Palestine should be considered a country or not because “Divine Intervention” was not submitted as a film. Despite the bureaucratic roller coaster “Divine Intervention” went through, many organizations called foul, including Arab anti-discrimination groups and Electronic Intifada. Director of “Gaza Strip” James Longley threatened to return his student Academy Award over the incident.

Although representations of Palestine and Palestinians have yet to surface in the Academy awards, perhaps Costanzo’s Italian production “Private” will change that. This year, the AMPAS will announce their nominations for the foreign film category on January 31, 2006 with the ceremony scheduled to take place on March 5.