Discussion of Atzmon's Peretz analysis - Why do they hate him so much? 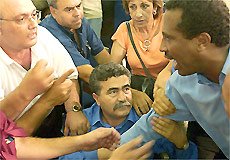 The responses to Gilad Atzmon’s analysis of Amir Peretz’s victory in heading the Israeli Labour Party have been coming in steadily on the Alef (Academic Left) Discussion list, which is a listserve that originates from Haifa University.

It seems to be that while those who comment admit that his victory is a major political change, there is a lingering insistence that there is something not quite right with Mr Peretz. One participant, Shraga Elam, claims that “Peretz has been part of the corrupted Labor's establishment for many years. He is no newcomer and is no Mr. Clean.” If that is the case, we need to be shown some evidence that Peretz has some dirty dealings, don't we? How can one go throwing around such unsubstantiated allegations? If there is something, I think he should come out with it rather than make allusions.

He further states that Peretz was “part of "peace now", which is a very militaristic "peace" movement and I won't analyse now its political perspective”, followed by an explanation that Peace Now was founded by military personnel. Yet, aside from the fact that Atzmon mentions in his analysis that Peretz so far has not been engaging his discourse in “making peace with Palestinians and dropping the word Shalom at every chance”, he rather is engaged in a process of internal reform, based upon an awareness of the disintegration of Israeli society as it is, with the focus on global economics at the expense of resolving local injustice. It is only in a society that succeeds in casting off ideas where one group is allowed to be oppressed by another, and everyone by Big Business, that any sort of relations to those outside this society can be dealt with.

The mere fact that Peretz is a representative of a community that has for so long been excluded from access to the progress that has been permitted only to the Ashkenazis is indeed relevant, and revolutionary, in that he has gained entry into this exclusive club that is political power without having “become” one of them, gone through the IDF with a glorious military career or been propped up by the Israeli financial elite.

Mr Elam continues: “I believe that a real change can come only from outside the system and not from people who are part of it like Peretz.” Aside from this being far from realistic, there seems to be a denial that the change in leadership, from that of the Ashkenazi left, which has always sought to, and succeeded in dominating discourse, might indeed bring about a “change from the bottom” that many of us have come to expect as the natural movement of class struggles in general and political struggles in particular.

On the subject of class, Tony Greenstein writes, criticising the analysis: “The problem with having no guiding philosophy or class politics is that you have nothing to judge events by.” Philosophy is the art of asking questions. If your task of asking questions is guided, then your question is detached from the event you are supposed to criticise, it turns into nothing more than a flavour of ideology, expecting everything to fit into the set compartment. Further, the fact that Peretz belongs to a group that is excluded from the upper echelons of society by the mere fact that he was born into an ethnic group, the Mizrachi, which Atzmon labels rather provocatively, “Arab Jews” that has been traditionally excluded from power, is indeed something that has considerable relevance in class analysis.

Again from Greenstein: “Peretz is the leader of the Israeli Labour Party. His origins are irrelevant except in so far as they may enable the Israeli Labour Party to widen its base”. This comment demonstrates a lack of political savvy in that indeed, widening the base is something that interests Labour, and it is not unlikely that a Mizrachi candidate will bring in votes from this constituency. As far as I know, Prime Ministers are made by general elections, and are not self-appointed dictators. Gaining the widest consensus possible is important, and it seems that the issues that Peretz brings forth are within the left discourse. That does leave us with the ethnic card, which is still an important consideration for bringing votes. Anyone denying this probably knows little about how Israeli society is organised.

Elam states: “Peretz is the first un ahkenezized mizrachi politician. One can say that people like Mofaz, Halutz, Ben-Eliezer, Katzav etc are Ashkenized Mizrahim, but I'm not so sure that Peretz is very far from them.” One wonders just what else Peretz is expected to do. Again, from Elam: “Peretz' social message is very very limited and needs a cool and realistic analysis and not just taking his slogans on face value.” Why is there some problem with taking what Peretz says at face value? What is going on where people who spend an inordinate amount of time writing about and discussing the Israeli situation, ever suggesting that a change has to come, insist upon being so critical when the world is finally presented with a innovative alternative?

And, I would say that the appearance of Peretz strikes me as being quite the innovation: that a person who is not Ashkenazi, nor ties his personal history or his interests to their world is leading the major opposition party in Israel, and he might actually gain consensus from people who are tired of the disintegration of Israeli society and want to change it, including the classes that have previously been excluded from the discourse. The figure of Peretz is being criticised, not only because he may not win the election, but because he is not perfect. Peretz may just be "another politician like all the rest", but until the revolution comes (not likely) it could really be that he presents such a novel alternative, that the persons of the left who concentrate on the P-I conflict simply don’t feel prepared to face losing centre stage in the discourse. That the cards are changing on the table, and this is disorienting.

A realistic perspective is that while Peretz may be rejected by the Ashkenazis, he might be looked to by people outside the discourse, including the non-Jewish Israelis, as a legitimate partner for dialogue. We have heard for many years that Israel had “No one to talk to” (meaning Arafat). What seems to be the more realistic situation is that the Palestinians had no one to talk to, including those Palestinians who hold an Israeli passport. Perhaps for the first time in the history of Israel, Arabs have the chance of finding “Someone to talk to”. Peretz does not represent any of the supremacist aspects that have been the trademark of the domination of Israel by the Ashkenazis, culturally, politically and socially. It might be a chance, hopefully not the last, for common terrain, some kind of REAL dialogue, with mutual respect. It might be the road that leads to reform within Israeli society, and peace in the Middle East. It is a small step, but a walk to the other side of the mountain begins with that first step.

A Londoner on the comments to this post who labels himself “AntiZionist” wrote this: “A question for you Mary. Is Peretz a Zionist? Will he repeal the racist law of return? Will he give the full right of return to all Palestinians? Will he dismantle the fascist state?

The answer to all these questions is NO.

Your blog pretends to support the Palestinian cause but in reality just props up the sick racists. What a fraud you are.”

To which, Gilad Atzmon responded:

Zionism is an Ashkenazi-centric movement!
It was born in Europe as a reaction to the emancipation of the European Jews. Zionism is a radical manifestation of 19th Century racist and nationalist European philosophies.

It was just a question of time before Palestinians and 'Arab Jews' form a fruitful dialogue that would eventually bring down the Ashkenazi Zionist state. Peretz’s victory symbolises a further shift within the Arab-Jewish society in Israel.

Whether or not it is Peretz who is going to redeem the region is yet to be determined, however it doesn't really matter. Once the Arab Jews realise that they can shape the Israeli vision, the Ashkenazi White supremacist worldview will disappear. This would be the end of Zionism. And the process has begun. The right of return won't be an issue anymore. Just because the Israeli state will become 'one Palestine'.

What we see in front of our eyes is basically the fruit of a long process of disintegration of the Israeli society.

Once the Ashkenazi power is marginalised, a true reconciliation will begin. Yet, it is hardly surprising that Ashkenazi Shraga Elam who despises Peretz or Tony Greenstein who apparently hates Islam are so horrified. To be an Ashkenazi is to hate the other. Peretz’s election proves how irrelevant the Ashkenazi voice has become, whether it is the voice of Sharon, Peres, Elam, Greenstein or even 3 scholars from Haifa Uni.