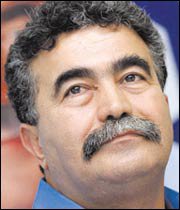 The recent election of Amir Peretz as the Chairman of the Israeli Labour Party is far more significant than many commentators would seem to admit. For the first time, the Israeli Labour party is led by a real fiery working class leader. Peretz is a relatively young man who grew up in a council estate in Sderot, a southern Israeli shantytown that was built especially for Arab Jews back in the 1950’s. At the time, the Jewish Ashkenazi elite couldn’t tolerate the idea of Arab Jews flooding into their newly erected European metropolises. The vast majority of Arab Jews were not part of the Israeli demographic landscape until after the foundation of the Jewish state. They were brought to Israel en mass in a massive exodus operation, which often times was forced. The idea behind the operation was the necessity to beef up the majority of the Jewish population by outnumbering the Palestinian population that refused to flee in 1948. Once in Israel, the Arab Jews were treated rather badly. Immediately upon their arrival they felt the heavy hand of Ashkenazi supremacist discrimination. The majority of the new immigrants were dumped in council estates in the Negev desert and other unpopular regions. They were there to serve the Zionist cause either as a cheap labour force or just as a human shield between the emerging European Jewish cities and the hostile Arabs on the other side.

Peretz grew up in Sderot and in the 1980s he became the town’s mayor. In 1995 he was elected as the head of the Histadrut, the major Israeli trade union. A few days ago, Mr Peretz made it to the very centre of the Israeli political stage. He had managed to oust Shimon Peres, the never dying and yet the most defeated politician in modern history.

Amir Peretz’s appearance is such a big revolution that Sharon and the Likud party are in a real state of panic. But the Likud isn’t alone, Shas, the Orthodox Sepharadic party is mighty concerned as well. For the first time, a secular Sepharadic man is leading one of the two biggest parties. Moreover, the man is an ordinary human being, he isn’t an heroic veteran IDF general. He isn’t an ex Mossad assassin, he doesn’t have Arab blood on his hands. He didn’t adopt the Ashkenazi’s pretentious jargon. He wasn’t appointed by an Ashkenazi politician as political bait to pull in Arab Jews. He is a simple Israeli man who managed to take over the second biggest Israeli party, he did it on his own right and he is an Arab Jew.

Mr Peretz was born in Morocco. He immigrated to Israel at the age of four. He has never denied his origin or tried to assimilate into the Ashkenazi Israeli world. I would allow myself to argue that if there is any remote hope for the integration of Jews into the region, it is a man like Peretz who may deliver the goods. It is a man like Peretz, himself an Arab, who can treat his neighbours with respect. Rather than Shimon Peres’s global dream of ‘new Middle East’ in which Israel delivers wealth to the ‘inferior’ Arabs, Amir Peretz’s message to the Israeli people is rather simple and far less pompous: once we address our social problems we will be ready to talk peace with our neighbours. This message is actually deeper than any other Israeli political manifesto I can think of. To start with, it is genuine. For the first time an Israeli politician considers peace as a meaningful signifier rather than an empty slogan. For the first time an Israeli politician refuses to drop the word ‘shalom’ just for the sake of dropping it. But not only is Peretz’s message authentic, it may as well be a message to the European community: No more global capitalism. Rather than serving big business politics you better look into your back garden. This message may help the confused French left address their current crisis. Unless some social justice is introduced into our national discourse, Europe would turn into hell. Don’t you forget, for many it is hell already.

It isn’t a coincidence that Peretz came with such a message. Israel is ahead of Europe in terms of moral deterioration. Being an Americanised state, it has been suffering the impact of global politics for many years. Israel is but a mere microcosm of a ferocious cultural battle. Being at the forefront of the so-called ‘cultural clash’, Israel is the place where East meets West. Where the colonial meets the oppressed colonized. Where black meets white. Israel is the pain Western colonialism dispersed to the Arab world. The Israelis are the occupiers but at the same time they themselves are the first to suffer from being the carrier of those doomed policies.

Israeli society is falling apart under the burden of many conflicting interests. On the one hand we can trace the liberal Western footprints of hard capitalism and privatisation. Israeli economy is run by big companies, that itself has led to a society obsessed with consumerism. On the other hand, we can see a rapidly growing economic gap between the rich and the poor, something that evolved into some serious social unrest. The rise of Peretz is a direct reaction to global capitalism. The Local grass-roots hero is apparently the best answer to the faceless Global enemy.

It is hard capitalism and global interests that may make Amir Peretz into Israel’s next Prime Minister. It becomes clear that the only way to confront global capitalism is to fight it locally and socially. This is what the Israeli Labour party has decided to do. Wisely, they dumped their old globalist Peres in favour of a man of the people. In the next election the Israeli people will have to choose between the hard capitalistic vision of the notorious Netanyahu and the call for social transformation and equality led by Mr Peretz.

I allow myself to assume that this is where Europe is aiming. The turbulence within the Labour backbenches that led to Blair’s defeat in the House of Commons less than a week ago, points out that it is the local concerns that will eventually topple Blair rather than his numerous war crimes in Iraq. Unless France endorses a sincere social attitude, it is aiming towards civil war. If the European parliamentary left is interested in rescuing itself as well as Europe from a complete defeat to American values of greed and radical egotism, it may want to explore Peretz’s moves in the coming months. The only way for the European left to survive this doomed era is to detach itself immediately from big business politics. To address a particular social strategy that addresses the unique local discourse and circumstances of what is left of the national state. http://www.gilad.co.uk/html%20files/peretz.html