Gilad Atzmon - Peace is not 'shalom' and 'Shalom' is not Sharon 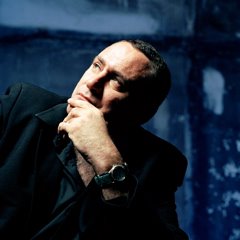 For the last few days we have been reading some flattering reports concerning the latest political moves of Sharon undertaken in his newly born peace loving persona. Sharon, a notorious war criminal, a man who has managed to prove time after time that he is totally lacking in any sense of moral guard or ethical consideration, has now managed to convince the Western media that he is the Israeli ‘voice of responsibility’. Make no mistake, Sharon and the Israeli people are indeed devoted ‘peace’ lovers, yet, it is rather critically important to mention that the Israeli notion of peace is pretty remote from any notion of peace familiar to the rest of humanity. When we think of the Hebrew word for peace we traditionally refer to the word ‘Shalom’. But apparently, shalom and peace aren’t exactly the same. In fact they are very different. While shalom refers to the freedom from conflict while achieving a general sense of security, peace has a far broader meaning. Peace is a true resolution. Peace is the search for harmony between people. Peace is all about reconciliation.

It is very sad to admit that the broad realisation of the notion of peace in terms of harmony and reconciliation is totally lacking within the Israeli mindset. For the Israelis, shalom means applying a strategy that would guarantee personal and national refuge to the Jewish people. For the Israelis, shalom means living in peace, nothing more or less than that. How shalom is achieved or maintained isn’t a real concern for the Israelis. The fact that millions of Palestinians are subject to state terrorism in a form of major war crimes committed by the IDF isn’t a practical concern either. In short, rather than harmony and reconciliation, shalom is a set of political and military manoeuvres that silence the enemy of the Jewish people.

This very ‘shalom’ philosophy stands in the very core of the Zionist left school. It is this very perception that led the Israeli left to believe that ‘two states for two people’ is a viable option. Clearly the two state solution promises shalom: it pledges personal security as well as a refuge to the Jewish people. A year ago, in the days leading towards the unilateral disengagement from Gaza, Sharon declared: “we (the Israelis) want shalom but we want to define its terms and conditions”.

Sharon’s idea is not that remote from Shalom Now’s agenda (‘Shalom Now’ is an Israeli left shalom seeking movement that is mistakenly translated into “Peace Now”). Sharon’s comprehension of the term shalom isn’t that different from Peres’s philosophy and in categorical terms, it isn’t that far from Uri Avnery’s Gush Shalom perception. The Israeli shalom seekers always want to ‘define the terms and conditions’. True, Avnery’s, Peres’s and Sharon’s ‘terms and conditions’ are varied, yet, they all believe in partitions between people. They all believe in two states for the two people. They may dispute the borders, but they all aim to resolve the Jewish question both in personal and national terms. The entire shalom movement is concerned with different methods of division between the Jew and the goy. This is the real meaning of the Israeli shalom. Sadly enough, just as separateness is the central purpose of Zionism, this bizarre self-centric political worldview stands at the core of Israeli left thinking. This is the logic behind the Israeli shalom movement’s collective dismissal of the Palestinian cause, i.e. “the right of return”. One may ask how it is possible that the Israeli left ignores the cause of their foes, the people they intend to make shalom with. How can the Israelis ever establish harmonious relationships with their neighbours? The answer is simple: the Israeli left isn’t interested in reconciliation and harmony. They are interested in shalom and shalom is not peace.

Six months ago Bush called Sharon a ‘man of peace’. Apparently, Bush was not that wrong, he was just lost in translation. Sharon isn’t a man of peace, he is a man of shalom. Being a militant nationalist Jew as well an experienced tactician, Sharon managed to grasp the biggest paradox within Zionist political thought. Within the Zionist discourse, it is the left who are leading towards a hard-core national and racist state. The hawks, on the other hand, push forwards towards a multi-national reality of ‘one state’. As bizarre as it may sound to some, it is the Jewish settlers who engage in the creation of an indivisible social reality of a single state, albeit with a vast Palestinian majority. It is the settlers who are bringing the Jewish national state down. Sharon, himself a historic mentor of the settler movement, has managed to diagnose this very flaw within the settler philosophy. The old man now realises that the maintenance of the Jewish state and its salvation from a demographic catastrophe is totally dependent on the immediate disengagement from the Palestinian population. Sharon and the shalom camp want a solid Jewish state with a clear Jewish majority. This realisation matured recently into a pullout from Gaza, it would mean a withdraw from the West Bank as well in the near future.

Furthermore, not only does peace not translate into shalom, the sincere Israeli aim towards shalom guarantees nothing but the continuation of war. If the outcome of shalom is indeed the division of the land between two peoples, it can never bring harmony and reconciliation to the region. The reasons are obvious. Shalom can never address both the Zionist and the Palestinian causes: it fails to address the morally grounded Palestinian right of return. But it fails as well to address the outrageous Jewish nationalist demand to settle in the entire land of greater Israel at the expense of the indigenous Palestinians. Shalom is thus the continuation of war. Sharon is certainly a shalom seeker. This is probably the reason that Blair and Bush are so excited about him. With Sharon in power, and it looks as if Sharon will remain in power, shalom will prevail. A unilateral shalom will be imposed on the Palestinians. Shalom that would allow the endless merciless bombardment of the Palestinians who insist upon returning to their homeland. Those who decide to live in peace will suffer the merciless Israeli shalom kill in what is left of the Holy Land.

a French version of this text (in addition to many other French translations of articles by Gilad Atzmon and others), by Marcel Charbonnier are available on the beautiful Quibla site, http://quibla.net/