Israel discriminates against Arabs in "Galilee" 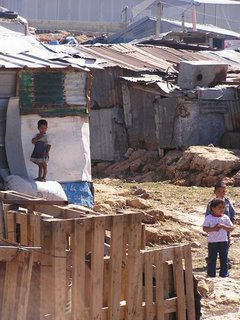 Only four out of 104 communities covered by Galilee development plan are Arab
By Jack Khoury and Yoav Stern, Haaretz Correspondents

The Hadash movement is set to launch its campaign against the new plan for developing the Galilee region, announced last week by the office of Vice Premier Shimon Peres, which the movement says blatantly ignores or discriminates against Israeli Arabs in the north.

The strategic plan offers more than 10,000 housing units in the Galilee and offers incentives to families, primarily from the center of the country, to move to the north.

Hadash, which will announce its campaign against the plan during a conference held this weekend in the lower Galilee town of Kafr Manda, maintains Peres' plan blatantly abandons Israeli Arab communities in the north. Hadash says the plan's declared goal is to ensure a Jewish majority in the Galilee.

"This is the cruelest plan of the past 20 years," Hadash said in an announcement on Wednesday. The movement says Peres' plan completely ignores the needs of Galilee Arab communities and deeps the gaps between Arabs and Jews in the north. "We are calling on the government to freeze the plan and to open a dialogue with the Arab public with the goal of formulating a plan based on the principles of equality. [Such a plan should be] aimed at closing gaps, expanding the territorial jurisdiction of Arab towns and creating industrial zones," the Hadash announcement said.

Peres' associates are rejecting the claims of discrimination directed at his plan. They say that, following appeals to his office, Galilee Arab communities were integrated into the plan. In addition, Peres is also pushing a number of programs aimed at aiding the Arab sector both in the Galilee and the Negev regions. His associates said he would not lend a hand to the implementation of a discriminatory plan or policy.

However, an Haaretz investigation revealed that of the 104 communities covered by the Galilee development program, only four of them are Arab or Druze towns (Ein al-Assad, Sandala, Moukibala and Taibeh).