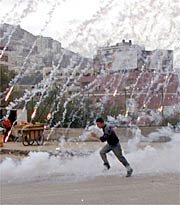 thanks to Jeff Blankfort for the forward.

"Likewise, Human Rights Watch is disturbed by eyewitness testimony suggesting that Israel may have used white phosphorus, or a similar incendiary ordinarily used for marking purposes, in an antipersonnel mode in populated areas in southern Lebanon. White phosphorus ammunition, according to experts, can cause severe burns and permanent scars. During the Israeli invasion of Lebanon in 1982, the Israeli shelling of villages in southern Lebanon in July 1993, and subsequent shelling attacks, there have been numerous allegations of Israeli forces using phosphorus against civilians. The available circumstantial evidence of the illegal use of phosphorus, and/or other incendiaries, by Israel against Lebanese civilians during the 1993 events and afterwards is so compelling as to warrant serious investigation and a public response by the Israeli government. Among other evidence, Human Rights Watch saw several civilians, including children, in southern Lebanon with burns that are likely to have been caused by phosphorus." http://hrw.org/reports/1996/Israel.htm

To many people, in fact, the siege of Beirut seemed gratuitous brutality ... The arsenal of weapons, unleashed in a way that has not been seen since the Vietnam War, clearly horrified those who saw the results first hand and through film and news reports from a distance. The use of cluster bombs and white phosphorus shells, a vicious weapon, was widespread. 14. Charles Powers, reporting in the Los Angeles Times, 29 August 1982. http://www.doublestandards.org/rose1.html

[8:20] But more frightening are the number of new weapons they tested in Lebanon - that time it was the first time Israel exploded phosphorous bombs. So that when phosphorus hits someone it just burns for days and days and then if you wash it - it will burn even more, and the victims just died of phosphorus burns. But this is a different kind - this is called a vacuum bomb. What would happen is that the bomb would go in to a centre, build up very high TNT value, and suck the whole building down - this is an 11 floor building that was sucked in to a heap of rubble, buried within it are 200 people. When I arrived and saw this for myself I know that a doctor can't do much - it is a very humbling experience... I could do nothing to help those people who were buried and killed in this one single bomb attack. Dr.Ang Swee Chai http://www.inminds.co.uk/from-beirut-to-jerusalem.html

A Reuters photo on the Ha'aretz web site on Dec. 15 carried the caption: "A Palestinian runs for cover as tanks fire phosphorous during clashes in Nablus on Sunday." The picture shows the Palestinian man running while a hail of white phosphorus scatters around him, burning bright white and leaving thick smoke . Phosphorus is used in tracer fire, which illuminates a battle scene. However, the photo was taken in daylight. The Israeli army has been blamed in the past for use of phosphorus as a weapon in Lebanon. Gideon Levy wrote in Ha'aretz on Jan. 9, 2000: "The laws of war also prohibit the use of phosphorus against civilians. But according to the report, at least two children and a number of adults have been killed or injured by phosphorus bombs sent by Israel." (Reuters, Dec. 15; Ha'aretz, Jan. 9, 2000) (David Bloom) http://www.ww4report.com/64.html