Noah Cohen - Repression of Palestinian Activists in the US 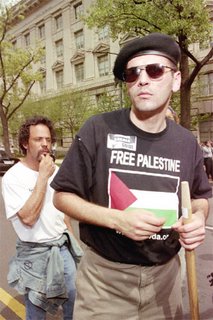 Does the ACLU really defend civil rights of activists? Judging by some cases in Boston, the answer is a resounding NO. Noah Cohen writes an exposè on some of the recent cases, and compares it to what is happening nationally. Under the excuse of the "Home Security Act", (and if the organisers of an Israel Independence Day march pay the local police for "protection"), activists really don't stand much chance to be defended as they should be, and acts of surveillance, harassment and detainment are just par for the course. An excerpt:

Amer Jubran and Sami al-Arian had shared the stage as Palestinian activists in DC on April 20, 2001. In February of 2003, Al-Arian would be arrested and imprisoned on charges of “supporting terrorism.” For the next eight months he was forced to rely on court-appointed attorneys who did little to help him. Much of his time was spent in solitary confinement under 23 hour lockdown. Serious defense did not begin until his defense campaign was able to raise enough money to hire private attorneys in October of 2003.

His trial is finally coming to a conclusion. It has clearly been a case of targeting for political speech and other legal activities in support of Palestinian organizations.

The targeting of Palestinian political activists has taken place within a broader context of attacks on Arabs and Muslims. This has allowed the government to conceal the political nature of its campaign: specific attacks against activists can be hidden under sweeping policies. The overall purpose has nevertheless been to silence a community living within the US that has intimate knowledge of US imperial crimes in Palestine, Iraq and the surrounding region.

On the whole, the civil liberties community has protested against these sweeping attacks on Arab and Muslim men; it has — perhaps for this very reason — tended to distance itself from more overtly political cases. Few rallied around Ali Al-Timimi —a religious leader sentenced to life in prison for preaching in his mosque against US imperialism. Imprisonment specifically of politically oriented Muslims who support armed liberation of their countries has been normalized in the full range of US discourse, even in cases where “support” consists entirely of speech.