Out of sight, out of mind - a reflection by Zaki Boulos 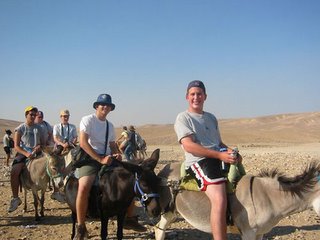 I don't have a problem with Pals achieving their goals, returning home to their lands, and plunging into civil war, 'til they find their way amongst themselves. A process of healing, rediscovery and self-empowerment needs to take place before Palestinians can reconcile themselves and move on, beat to the rhythm of one drum, a single heart beating for a body reunited with its soul.

I mean this latter scenario seems more natural than democratisation, don't you think?

I'm not saying I want civil war but you can appreciate scaling the inner struggles of the individual to a nationwide struggle, which inevitably means civil war. This said, I can see a civil war really helping the Ziocons; it's cost effective and, more over, it may even be quite lucrative (Lebanon being the model for civil war).

Do you really want to see Gaza being turned into some kind of coastal Las Vegas with all its workers being Palestinians? You do realise in such a setup the Palestinians won't own any of the businesses, they would clock in and clock out of their respective hotels/casinos in the same way factory workers would punch their way into economic enslavement.

So what's my problem? Just growing up? What am I smelling that reeks to high heaven? I can hear angels murmuring, complaining for divine intervention, "Please God do something! It really stinks down there!"

Seriously, nobody likes to see Palestinians (or anyone else) being shot, maimed, beaten, stripped of their pride and dignity, or humiliated and abused just for existing; and that’s just the physical stuff, never mind the irreparable psychological damage. A Palestinian bringing you your cocktail whilst you enjoy your affordable luxury hotel and all its comfortable amenities, that's ok. No one got 'hurt', right?

I have a confession. My parents took my sister and I on one of those lavish cruises. It was a truly amazing experience. Though I didn’t get sea-sick, I couldn't help feel sick on the inside, a sense of melancholy and revulsion took me, but because my folks paid through their teeth to make us ‘happy’, I buried my feelings so as not to hurt their feelings. I would feel worse if they thought I was ungrateful. From the moment I boarded this engineering spectacle, I was uneasy with the decadence it supported, of which I was a part of. I had to shake this fast or I’m gonna break someone’s heart. So I did, I put my feelings on hold; it was only for a week or so.

One day we anchored at Haiti, one of our scheduled stops. Once we'd settled in at the beach, I took the opportunity to break away from our group, we were travelling with other families, and I went walkabout, exploring the island on my own. Obviously, the cruise management had us loosely 'boxed in' for our 'safety' but we did not feel this. Haiti is just breathtaking. A typical tropical island, rugged mountainous forest down to the sea. I can still see the sandy outline of the shore shaped by varying shades of blue.

I found a quiet place away from the all the people. It was just me, this island, and the blistering heat. Until you experience that kind of natural loneliness with only the sounds of the tides to keep you company, it's difficult to comprehend why prisoners were sent to these remote locations. It's especially intimidating if you come from a city, all you have to do is imagine nightfall. We were quite literally in the middle of nowhere.

I couldn’t take the heat much longer and left this lonely sun-beaten spot, making my way to the local 'tourist' market to buy myself a trinket, a piece of Haitian memorabilia, which I still have. I found a small hand-made bowl carved out of wood with ‘Haiti’ inscribed on the cover, looks like the guy used a soldering iron. I liked the piece, asked him how much he wanted for it, and purchased it. I was ripped off but I didn't care because in my pathetically small minded way I was helping the 'local' economy; even though the cruise management probably got most of it since they owned the market. I had a look round at some other stuff then made my way out of the market area.

I wandered past the market, further inland, and onto an open field. To the left of the field, some people were playing football or something, I can't remember precisely, and over to the right, there it was, towering over us barely casting a shadow in the high sun. I saw this huge spiked wooden wall with massive doors. I stood there for a while trying to figure out what this thing was for; of course, I had my suspicions, I was inside our cruise ‘sand box' after all.

Two gate-guards cracked the door open to let a person out escorted by two other guards. I could see a mass of Haitians trying to get in. I knew they were Haitian because they were all black, and barefooted for the most part! And there they were, the indigenous peoples of this land of paradise, beyond the barrier, just out of touch, out of reach. They were scrambling all over each other with armed guards on the outside pushing them back. Of course, they were trying to get to the market within, so they can sell their pathetic little trinkets, so they too can have money and buy things, so they too can be part of our economic loop, this blackhole we call economics.

Yes, for the most part the Haitians in the 'cruise compound' were uniformed servants of sorts, kind and courteous at all times, the rest were confined to the market area.

It's weird how a silver spoon can leave a bad taste in your mouth.
I see the Palestinians on this route, the road to Haiti, so book your tickets soon for that all memorable 5-star cruise across the Mediterranean for you and your loved ones.