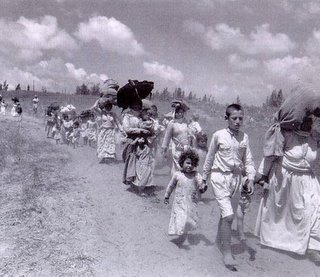 GAZA, Palestine, November 29, 2005 (IPC + Agencies) - - Several Palestinian factions and associations in the Palestinian territories called on the people to observe the remembrance day of the UN General Assembly's Partitioning Resolution, and demand the right of return for refugees.

In Gaza City, the first conference of the Popular Gathering to Defend the Right to Return was held on Tuesday, to assert the Palestinian refugees' right to return to the lands they were dispossessed from.

The Gathering had held a series of meetings over the past month throughout Gaza Strip to prepare for the meeting, which was held at Said Al Mishal's Association for Culture and Science.

Abdullah Horani, the head of the Palestinian National Council's political committee and coordinator of the conference, said the Gathering includes a number of committees, organizations and popular associations interested in the issue of refugees, pointing out that these bodies have joined forces to "unveil the conspiracies being connived against the right to return, and mobilize the Palestinian people towards safeguarding that right."

Horani further mentioned that the Gathering is a fruit of many years of efforts to defend Palestinian refugees' rights, focusing on raising people's awareness in the Gaza Strip, West Bank and inside the Green Line, as well as stretching out to include Palestinian communities in Diaspora.

He also explained that these efforts were extremely successful in shedding light on the issues of refugees and the dangers they face, as well as enticing the Palestinian people to defend these rights and consider them a red line for the Palestinian leadership and negotiators.

The factions added, in a joint press statement, that the Palestinian, Arab and Islamic nations of all walks of life are demanded to take part in these activities, to expose the crimes of the occupation and help put and end to them.

The factions also called to go out on Tuesday on massive demonstrations to condemn these crimes and denounce the 50 years of world silence and inability to find a just solution for the Palestinian cause.

The statement pointed out that "on the eve of the international day of solidarity with the Palestinian people, Israeli occupation forces continue persecuting and killing citizens, as well as arresting many others, closing roads with a plethora of checkpoints and roadblocks, continuing the construction of the Apartheid Wall deep into Palestinian land, and expropriating Palestinian-owned lands everywhere, especially in and around Jerusalem."

The factions called on world governments, international and humanitarian organizations to observe the solidarity day and cooperate with the Palestinian people and its national authority in order to gain their rights in the face of the Israeli cruelty and hegemony.

They also called to circulate the recent European report criticizing the Israeli policies in East Jerusalem, considering it a living proof to the criminal acts of Israel there.