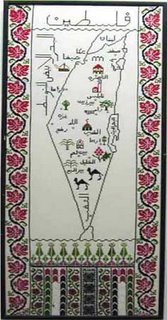 It was a year to this day that I first started this blog. And just like a year ago, I had an article up by Gilad Atzmon. Some things stay the same, but some things do change, and this board has been in constant transformation and evolution. A year ago I didn’t know what I was doing, didn’t even know what a blog was! I didn't think I would know what to do with it, but to the chagrin of a few of the usual suspects, I am still going strong.

In the coming weeks there are some interesting interviews coming, as well as the launching of an international campaign in support of the freedom of speech of Haj Ali, the man who became the symbol of the victims of Abu Ghraib. I have a few articles sent to me by people that will be going up soon, and in general, will try my best to bring original, interesting and useful material to those who come here for a visit.

Now, I wanted to throw a party for my friends, to tell them how much they mean to me, but these days just don’t feel right for it. With the new material coming in about what the Americans did to the city of Fallujah, and especially the silence surrounding it, even in the country where the filmed document was produced, it almost feels wrong to celebrate a blog that basically reports on all these negative things.

But, I still want to in some way do it. I first of all have to thank a lot of friends for their support, love, help, advice and knowledge. My beloved Umkahlil and beloved Gilad, first and foremost. (What would I do without you two?!) You are two of the pillars of this site and two of the best friends a person could ever wish to have. Then, obviously the many people who have contributed material and comments to this site. The Lily Brigade, headed by Joe, Gerry and Zaki, but with the occasional welcome contributions of trouvere, treeplanter, and other enemies of Zionism. The soldiers of Zionism have also found a comfortable place here, for some reason… I guess they like the armchairs?

I know there are others who have donated me their energy, encouragement and advice, some who have written articles, letters or comments, sent books, videos, DVDs and assorted material and I thank you for your friendship, generosity and support. Thanks also to all the blogs and sites that link here. A special nod to the Italian bloggers who I wish I had time to translate and put up on mine. Siete i migliori!

A monumental thank you goes to Tom Feeley of Information Clearing House. I’d be lost without you! An extra special thanks to the blog aggregators Haitham of Palestinian ReBlog (and many other fine sites!), Shaden of Sugar Cubes and Andrew of Semitism. Special thanks to Paola of Uruknet. Thanks to my husband for putting up with all of this!

Just as a closing, I’m putting up the links to the articles from this blog that have gotten a lot of readers, even after they have gone off the top page, or have some special meaning to me.

The One State Solution , The Left and Palestine , Militant Solidarity , Reflections on Holocaust Remembrance Day , Ariella Atzmon – Exiled Writers , Iran, Women and the Western Idea of Beauty , Suicide Bombing, Crime Against Humanity? , Charity and Utopia , Anti-Americanism? , Gilad Atzmon Interview – It Ain’t Necessarily So , Who’s to Blame for the Pain? , Get ‘em out by Friday – displacing Arabs as a Humanitarian Solution , Giulietto Chiesa – Ten Commandments of the Empire , Benny Morris’s Alamo