Reporters Without Borders: There is no occupation - Kristoffer Larsson 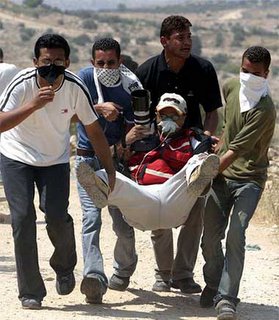 In the photo: Palestinian photographer Alaa Badarneh of the European Press Agency (EPA), "out of combat" after Israeli soldiers fired tear gas directly at him while photoreporting a peaceful demonstration against the Apartheid Wall.

From “Predator of the Free Press” to “Best in the Middle East.” In three years Reporters Without Borders (RSF) has made a full turn in its judgement of Israeli freedom of the press. The climb from 92nd to 47th place is unprecedented in the history of the RSF Press Freedom Index.

At the same time the position of the Palestinian Authority has dropped substantially. What may at first glance seem like an improvement of Israeli treatment of journalists, a deeper study shows that Reporters Without Borders no longer holds Israel responsible for violations on press freedom in the occupied territories, meaning it has liberated Israel from its duties as an occupying power.

In its annual report on the freedom of the press in almost 170 countries world wide, Reporters Without Borders (Reporters sans frontièrs, RSF) ranks Israel’s treatment of journalists violations on press freedom as comparable to the situation within the borders of the United States. The Palestinian Authority get thumbs down, though RSF recognises that the PA “seemed powerless to prevent the situation worsening.”

“The index measures the state of press freedom in the world. It reflects the degree of freedom journalists and news organisations enjoy in each country, and the efforts made by the state to respect and ensure respect for this freedom,” Reporters Without Borders declare on its homepage. The more restrictions and violations as well as actions against journalists a country commits, the higher the index figure and the lower its ranking for press freedom among the nations. For example, seven European countries did best this year and received an index figure by the RSF as low as 0,5. Worst in the world is North Korea (167th) with an index figure of 109. Further, it should be mentioned that the annual report of 2005 “is based solely on events between 1 September 2004 and 1 September 2005.”

The first index was compiled in 2002, ranking Finland, Iceland, Norway and the Netherlands as number one while North Korea hit the bottom (as well as the following three years). Surprisingly, the Palestinian Authority (PA) was considered friendlier towards press freedom than Israel and hit the 82nd spot. While allowing journalists to work relatively freely within its borders, Israel did not do well in the research (92nd) due to its measures carried out against press freedom in the occupied territories. According to RSF, this is due to the fact that:

“Since the start of the Israeli army’s incursions into Palestinian towns and cities in March 2002, very many journalists [were] roughed up, threatened, arrested, banned from moving around, targeted by gunfire, wounded or injured, had their press cards withdrawn or been deported.”

The following year, RSF decided to divide Israel into two different categories; Israel (Israeli territory) and Israel (Occupied Territories). The first-mentioned shared the 44th place with Japan, while the Israeli Occupation Government (146) was rated lower than the PA (130).

In 2004, Israel (Israeli territory) climbed a bit in the index, ending up as 36th in the world along with Bulgaria. However, in the occupied territories, Israel continued to impose restrictions on journalists, although it was seen as less restrictive than the PA (127). Although the Israeli Occupation Government score was to be found twelve places higher, the index figures for Israel combined – Israeli territory (8,00) and Occupied Territories (37,5) – left them with a total a bit worse than its Palestinian counterpart (45,5 against 43,17).

The PA was accused of providing “no information about a supposed investigation into the murder of a journalist in the Gaza Strip” while “news media were ransacked and some 10 Palestinian journalists were physically attacked by unidentified persons or armed groups such as the Al-Aqsa Martyrs’ Brigades.”

But then in 2005, things changed. RSF decided no longer to divide Israel into two separate categories, claming its violations on press freedom in the occupied territories were negligible during the year. On Israel, RSF states:

“Israel (47th) does best [in the Middle East] but it slipped several places this year because of the army’s mistreatment of journalists in the Occupied Territories. This kind of violence decreased sharply during the year and is no longer dealt with in a separate section as in previous years. The expulsion of a French journalist in July also contributed to Israel’s downgrading.”

“The Israeli media, protected by laws and court rulings, are very bold and energetic however.”

“In the Palestinian Territories, security disorganisation was accompanied by increased violence against the media, aggravating the obstructions caused by the Israeli army.”

Israel’s index figure fell sharply from 45,5 in 2004 to only 10,0 this year. In both 2003 and 2004, the index figure for Israel (Israeli territory) was 8,00. Following this, it is obvious that Israeli restrictions on occupied territories did not affect this year’s index figure over Israel very much.

Meanwhile, Reporters Without Borders is not as pleased with the Palestinian Authority as it was previously. 132nd place means it lost six places in a year, and its index figure is pretty much the same as the earlier year (42,5). Interestingly, in its report, RSF ascribes to the PA violations it hasn’t committed or even been able to prevent:

“However, lawlessness continues in Gaza and journalists have become targets. Four were kidnapped during the year and the Palestinian Authority (132nd) seemed powerless to prevent the situation worsening.”

Israel’s high rank was met with great surprise by Johannes Wahlström, Swedish-Israeli Media Researcher and co-founder of the International Middle East Media Center (IMEMC). He has reported from Israel as well as the occupied territories and finds it hard to believe that Israeli atrocities and restrictions have almost completely ceased to exist.

“It seems Reporters Without Borders has decided that the PA instead of Israel is to be held responsible for violations against reporters in the occupied territories. It is as if they no longer recognise the occupation,” Wahlström says.

He compares with the three earlier indexes, which all gave Israel a higher index figure than the PA. The sudden change, Wahlström believes, is due to pro-Israeli pressure.

“Israel is no longer held responsible for what happens in the occupied territories,” he says. “Sure, press freedom exists within Israel. What Reporters Without Borders is saying is that Israel allows press freedom in one part of the land, while pretending it has no responsibilities in the other part.”

“It is strange because the index distinguishes between the U.S. on American territory (44) and the U.S. in Iraq (137). If the press freedom improves in Iraq, will the occupation cease to exist?” Wahlström asks rhetorically.

Working as a journalist in Israel/Palestine basically brings about two problems. If something happens in the occupied territories, the Israeli military seals off the city, denying journalists access. For instance, on November first The Guardian reported that “The Israeli defence ministry has barred foreign journalists from entering the Gaza Strip in an apparent attempt to limit reporting on the killing of Palestinian civilians, the firing of artillery shells and the use of ‘sonic bombs’ to terrify the local population.” [1]

This is a frequently used tactic by the Israelis to prevent journalists from writing on Palestinian suffering. But if a suicide bombing occurs or if Jewish settlers are murdered by armed Palestinians, journalists are given full access. As Wahlström points out, “This is an obvious problem.”

Secondly, if a journalist produces articles that Israel considers to be “anti-Israeli,” he/she may in the long run not get a renewed press card. Even worse, he/she may be denied entry into Israel altogether.

“I didn’t get my press card renewed. And if I after that would get into cities illegally, I risk being expelled. Many journalists don’t want to take that risk, which means that they cannot really take part in the everyday life of the Palestinian people. That is why we founded the IMEMC,” Wahlström explains.

IMEMC has contacted the Swedish office of "Reporters Without Borders" for an explanation, but it has so far failed to comment on the issue.
http://www.imemc.org/index.php?option=com_content&task=view&id=14803&Itemid=1