What is the real agenda of the Italian Pro-Israel Demo? 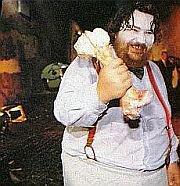 A press statement from FORUM PALESTINA
(translated by Mary Rizzo)

Flames of war and lies in Rome

Even a benevolent and neutral observer is able to intuit the instrumentalisation of the Pro-Israel candlelight vigil in Rome organised by "Il Foglio" of Giuliano Ferrara(in the photo) to which accomplices have been recruited from the left such as Fassino (leader of the major opposition party, the Democratici di Sinistra), Folena (DS) and others.

We are dealing with, in fact, a demonstration supporting the mass media political campaign that is preparing a new escalation in the infinite war in the Middle East theorised by the "Likudniks" in Israel who are present not only in Bush's administration, but also in the Italian establishment.

The declared objective this time is Iran. The declarations of the Iranian president Amadinejad have caused clamour and brought about official protests that are well beyond the norm. And it is curious, because the Non-Recognition of Israel by Iran has been expressed by the Iranian authorities every year, for at least fifteen years, during the day of Al-Quds. If this year there have been such furious reactions, it is because the political agenda and the international situation are distinctly different from the previous years.

In Iraq, the strategy of the infinite war undertaken by the USA and by Israel is in serious difficulty. It is at such a point that there is an internal crisis opened within the Bush administration. The timetable of the construction of the "Great Middle East" which functions according to American and Israeli interests has therefore had a setback and needs to be jump started in order to hit new targets such as Iran and Syria and to definitively make null and void any ambitions of the Palestians to have a true independent State. .

The candlelight vigil of Rome can not hide the truth: the Iranian president had invoked in words the cancellation of Israel, but the Israeli authorities have cancelled to the sound of cannon fire and bombs the right of existence of a Palestinian State.

Iran does not yet have nuclear power or weapons, but it accepts the inspections of the AIEA, while Israel already has at least 200 nuclear warheads, it refuses the inspection of the AIEA and has not signed the Non Proliferation Treaty.

The mass media manipulation up to a certain point can even hide the reality, but facts are hard headed and the general public has demonstrated on more than one occasion to know how to distinguish reality from the lies of war.

We have made the decision to not demonstrate in the street against the Pro-Israel demonstration so as to avoid clashes and instrumentalisation. We are however working on a week of action that is about the rights of the Palestinian people from 12 to 19 November (included in the international protests against the Apartheid Wall in Palestine) and to bring to the streets of Rome, as we have done every year for the past four, thousands of people in a national demonstration supporting the historical objectives of the Palestinian people. The flames of war and of lies that will be lit tonight in Rome will be put out by the democratic and peaceful activities of the coming week.
Forum Palestina