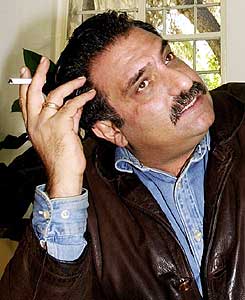 this in from a "settler" newspaper, Arutz Sheva

Arab Israelis, including an MK and Moslem fundamentalists, demanded Saturday that
Israel recognize the "right of return" for Galilee Arabs who fled during the 1948 War of Independence.

Reflecting a growing and more open policy among many Arab citizens of Israel, they called for an alignment of Arab organizations in Israel and in the Palestinian Authority (PA).

The gathering in Nazereth Saturday morning was under the banner "responsibility for the historical Nakba," referring to the "tragedy" of the establishment of Israel as a Jewish state. It featured displays of household items and names of Arab villages. Among the participants were the head of the northern chapter of the Islamic Movement and at least one Knesset member.

MK Azmi Bishara, who was born and lives in Nazereth, encouraged the crowd to keep "burning the coals of the struggle against Zionists." He spoke one day after returning from Lebanon, in violation of government orders against visiting an enemy country.

Bashara and other Arab MKs also have called for the partitioning of Jerusalem, and they boycotted this year's Knesset panel marking Jerusalem Day. The status of the city took over the Israeli election campaign this past week following a Newsweek magazine report quoting an aide to Prime Minister Ariel Sharon that he is prepared to give away part of the capital.

The Prime Minister, who has formed the new Kadima party, has vehemently denied the report. Shimon Peres, who left the Labor party to support the Prime Minister, said on Saturday that Jerusalem will remain unified, but Sharon's ally Minister Tzipi Livni refused to directly support a unified capital.

Israel is the 20th century's greatest robbery, carried out in broad daylight, Arab Knesset member Azmi Bishara (National Democratic Assembly) told a Lebanese audience last week during a speech at an Arab book fair in Beirut. "I will never recognize Zionism even if all Arabs do," he said. "I will never concede Palestine. The battle is still long."

Bishara, who recently launched his campaign for an additional term in the Knesset, left for Lebanon five days ago without consent from the Interior Ministry, Israel's leading newspaper Yedioth Ahronoth reported Sunday. His harsh anti-Israel message at the fair was quoted by Lebanese newspaper As -Safir.

"The conflict between Israel and the Palestinians is not a demographic dispute, but a national one," he said. "It's not the problem of 1.2 million Palestinians living in Israel. They are like all Arabs, only with Israeli citizenship forced upon them."

"We are the original residents of Palestine, not those who came from Poland and Russia," the MK added. Directing his speech at Israelis, Bishara said, "Return Palestine to us and take your democracy with you. We Arabs are not interested in it."

The audience received the Knesset member with great applause. Bishara also used the opportunity to criticize Arab leaders who have ties with Israel."Why does one of the Arab countries provide a home for (Foreign Minister) Silvan Shalom, while the army destroys homes in Palestine on a daily basis?" he said, referring to the foreign minister's recent visit to his birth county of Tunisia.

"If you want to surrender, do it, but don't force us to give in." Bishara has meanwhile returned to Israel and told Yedioth Ahronoth Saturday night that his speech was "about Zionism and citizenship." "I didn’t say anything new that I hadn't said in other places. I've spoken like this in the Knesset," he said.