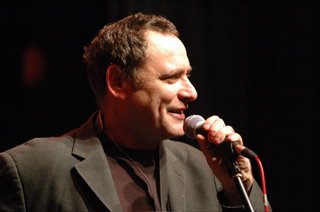 The lady was so outraged that she ran out of the theater, slamming the door behind her as soon as Gilad Atzmon dedicated a ballad to the people murdered by the Israeli Army in the Occupied Territories. Very rarely we have seen a similar spectacle in jazz; but neither is it very frequent that somebody kicks off a performance speaking about “the three biggest killers of mankind”, in reference to Bush, Blair and Sharon. The concert was just beginning, and already the tension could be felt in the air. Very little was needed for the passions to ignite and the pacific dialogue between instrumentalists – all of them attached by blood ties from the two sides in conflict, Palestinian and Israeli– could give way to another very different dialogue, between the displeased spectators and the artist.

But the situation was turning out to be comical enough, with words going one way and music the other. Although it is also possible that this most virulent verbal dispute could make the most Parkerian of the current Germanist philosophers in practice and his musicians to blow, pluck or strike their instruments with renewed impetus, and that would explain the wonderful hour and a half of pure fire they offered us. Not even the late incorporation of the always fearsome “ethnic set of instruments”, i.e. acordion and violin, could extinguish it. But the color of music changed indeed. From jazz stricto sensu we passed to avant-garde cabaret or perhaps it could even be that we were always listening to the same thing without even noticing it, because it was coming from the same King Midas of modernity, capable of making all he touches his. A sweeping personality, this Gilad Atzmon, so much so that he still had not even begun doing his thing and we already had forgotten the poor Raynald Colom, who had the ungrateful task of warm-up artist. An inexcusable pity because this Catalan – more Freddie Hubbard than ever – offered an impeccable sample of his qualities as a jazz player and as a musician, two things that are not the same, even if they look alike. And accompanying him was a very inspired Marc Ayza doing marvels at his drums. But it was not his day.