James Petras - The Politics of Language, Escalation or "Retaliation" 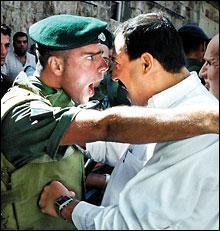 Israeli Attacks on Palestinians
December 26, 2005
It is commonplace to read each day in the most prestigious newspapers (Financial Times, New York Times, London Times, Washington Post) of Israeli “retaliation”/ The reportage frequently mentions a Palestinian attack on an Israeli colonial settlement in the West Bank or urban population center in Israel. The action and reaction always is located in a limited time frame. Palestinian action is always the initial moment and the Israeli military attack is always described as a response or “retaliatory” and therefore, presumably a form of defensive action, “justifiable”.

Thus what appears as objective reportage on two sets of military actions, is in fact an arbitrary selection of time frames which lays the basis for a highly biased interpretive framework. The pro-Israeli tilt, evident in the chosen time sequence, and the framework, are derived from the general ideological argument which portrays Israel as a democracy, defending itself from Arab-Muslim terrorists and not an expansionist colonial power engaged in violent ethnic cleansing and large-scale long-term forced population expulsion.

What is absent from the reportage of the prestigious “news” accounts is the sequence of events preceding the Palestinian attacks. Here we are likely to find a series of Israeli military incursions, bombings and killing of non-combatants, summary executions of political prisoners, as well as arbitrary arrests, home demolitions and illegal (even by colonial standards) land seizures.

An examination of readily available, well-documented weekly reports by Palestinian Center for Human Rights (PCHR), throws a wholly different light on the context and framework for understanding the sequence of events and, equally important, the nature and goals of the Israeli state.

In this context Palestinian military actions are clearly defensive of community, family and livelihood.

A survey of previous reports covering 2005, indicates that the data for the week of December 8-14, 2005 was fairly representative of Israeli activity. If we were to multiply the weekly findings by years: 52 X 5 X military assaults???? We would capture the magnitude of Israeli offensive military action. The overwhelming evidence, both in terms of scale, scope and time frame of Israeli military attacks clearly points to persistent Israeli offensive activities linked to territorial expansion, colonial oppression and ethnic cleansing.

The indiscriminant attacks on civilians and children, the systematic destruction and blockage of essential transportation and travel routes, and the vigorous application of policies of collective guilt (arresting family members of suspected guerrillas, the blowing up of family homes of suspects) have everything to do with destroying the basis of economic activity, the social fabric of civil society and family networks.

The empirical evidence provides the basis for concluding that Israeli military attacks on Palestinians, by their systematic and continuous nature, are not retaliatory; they are clearly detonators of Palestinian military responses. Israelis are not victims rather victimizers, as it evident from a multiplicity of actions: seizing homes, land, prisoners, transport routes etc. The initiative and design of the Israeli actions are directed at intimidating and impoverishing Palestinians and ultimately forcing them to abandon their country to achieve the goal of a “pure Jewish state” based on rabbinically approved “blood ties” not dissimilar from previous racialist clerical regimes.

The respectable media’s constant reiteration of the colonialist “retaliatory” rhetoric can be seen as a propaganda weapon designed to obfuscate Israeli ethnic cleansing and its military expansion, and the underlying racialist-clerical underpinnings of its strategic goal of a pure Jewish state. The media’s choice of works – adjectives and verbs – is part of a cultural war, which is embedded in the structural hegemony of pro-Israeli followers and supporters.