Joe Kane - The Many Faces of Activism and Resistance 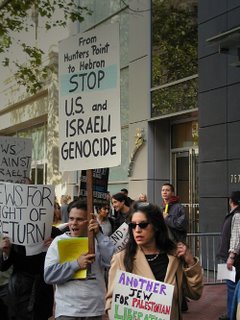 Never doubt that a small group of thoughtful, committed citizens can change the world. Indeed, it's the only thing that ever has!
Margaret Mead (1901-78) American Anthropologist

The great Palestinian Peoples are struggling for international law and order to be applied to them. The Palestinian Resistence Fighters are not doing what they do simply because they are inherently violent, or that they are psychopathic, or because you can't talk sense to them etc. They are actually fighting for the laws that be to be applied to themselves and their community! All they want is to be left in peace and quiet, they want justice for all, for both ordinary Israeli folk and Palestinians alike. There are many problems to be faced between the two great Peoples, the Palestinians and Jewish-Israelis. However, one of them is as clear as daylight - which has been, since 1967, American support for the on-going illegal activites of the racist Establishment of Israel.

This is is an excerpt from "Hegemony or Survival" by Noam Chomsky, showing how simple it was for the US to stop the slaughter in East Timor - remember, the real crimes take place in Washington, and to a lesser extent other western capitals, not in the West bank or in Iraq or in East Timor.

East Timor (and Kosovo)
Just as Columbia was replacing Turkey as the leading recipient of US military aid, another tale of horror was unfolding that Washington could easily have brought to a quick end: East Timor. In 1999, Indonesia escalated the atrocities in the territory they had invaded in 1975, killing perhaps 200,000 people with the military and diplomatic support of the US and Britian, assisted by 'international ignorance'. In the early months of 1999, Indonesian forces and their paramilitary associates added several thousand more to the death toll, while the ruling generals announced that worse would come if the population voted the wrong way in an August 30 referendum on independence - as they did, with amazing courage. The Indonesian military made good on its promise, driving hundreds of thousands from their homes and destroying most of the country. For the first time, the atrocities were well publicised in the United States. On September 8, the Clinton administration reacted by reitirating its position that East Timor is 'the responsibility of the Government of Indonesia, and we don't want to take that responsibility away from them'. A few days later, under strong international and domestic pressure, Clinton reversed the 25-year policy of support for Indonesia's crimes in East Timor, and infomed the Indonesian military that Washington would no longer directly support their crimes. They immmediately withdrew from the territory, allowing an Australian-led UN peacekeeping force to enter unopposed.

The lesson was crystal clear: as a handful of activists and critics had been saying for almost twenty-five years, there had never been any need for threats or forceful measures. It would have sufficed to withdraw from participation for some of the worst crimes of the late twentieth century to have come to a halt. But that was not the lesson that was drawn. Instead, the doctrinal system, rising to the challange, drew the required conclusion: the events in East Timor demostrated that foreign policy had entered into a 'noble phase', as the leaders of the civilised West pursued their dedication to 'principles and values'.

That recasting is an impressive achievement. One wonders whether it would be possible to contrive a hypothetical series of events that could not be adapted to prove the required thesis.
(p 53-4, Chapter 3 - The New era of Enlightenment, 'Hegemony or Survival; America's Quest for Global Dominance', Noam Chomsky, 2004, London, Penguin)

One point to note here is that, even when you are responsible for doing good, you won't get the credit for it. But never be under the delusion that what you think, do, or say, no matter how small or large doesn't count. It does. According to opinion polls and the international consenus, it is Palestinians and supporters of their rights who are the 'mainstream', and it is the current US (and Israeli) regime which is the extremist.
All Palestinians ask for is the laws that exist to be applied, nothing more. How radical, alternative, progressive, extremist is that ? It is, in fact, a very traditional conservative point of view.