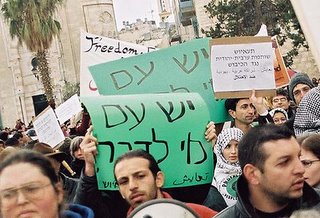 Silvia Cattori: During all these years, when the Palestinian Authority took part in the negotiations, the Palestinian accumulated frustrations and sufferings. Israel, benefiting from this time to consolidate its gains, is now stronger than ever. The last proposal of Ariel Sharon leaves to Palestinians 8% of the historic territory. How do you feel thinking none of the goals of the Palestinian Liberation Organization has been achieved so far?

Mahmoud Musa: What has been going on for 15 years since the Madrid meetings cannot be called negotiations. At that time, Israel’s Prime Minister Itzhak Shamir said “I can keep this game going for 10 years”. No one expected this game to be going on 15 years later. The aim of Israel’s government is to take over the land, destroy the economy, massacre and humiliate the Palestinians, in order to continue the process of ethnic cleansing that was started in 1947. The Palestinian Authority should stop participating in this pretention.

Silvia Cattori: So far, all accords – from Oslo to Geneva – were based on premises morally unacceptable, in particular the separation between two peoples on ethnic bases. But this option, which would end up with the creation of a pseudo-Palestine, which would concern only one third of the Palestinians and less than one fifth of their lands, does not seem to be unanimous. About the Road Map, dear to Bush, nobody talks. Do you think that a single State could be a possible alternative, eventually?

Mahmoud Musa: There has been an endless number of plans : Madrid, Oslo I, Oslo II, Wye River, Camp David, Tenet Plan, Mitchel Paper, Sharm El-Sheikh Accords, Geneva Initiative, the Road Map. This is all to try to separate the Jews and Palestinians who are already mixed, and their natural resources and economies cannot be separated. In order to perpetuate this apartheid system, a wall and exclusive highways are being constructed. This process should stop and a process of building one democratic State be started.

Silvia Cattori: The Palestinians, who are grouped in religious movements, don’t they have nationalist aspirations likable to counter this idea of a single State for all?

Mahmoud Musa: These are political groups. Religion helps people tolerate the harsh conditions they have to live under. They are not at all against living in the same State if they are not discriminated against. Palestinians are struggling against colonialism not Judaism; just like Black South Africans struggled against colonialism and Apartheid not white people.

Silvia Cattori: If the claim for a single State is the only viable solution, because more equitable and respectful of international law, why until now it is the solution based on two States which is put forward by the peace camp and the international bodies?

Mahmoud Musa: This has gone on primarily because the Palestinian Authority has been calling for two States. However, this is changing quickly because of the realization that a viable Palestinian State is not possible, and the two State solution will not bring peace and prosperity to the region and the world at large.

Silvia Cattori: Even if the solution of a single democratic State, where Israelis and Palestinians would live inside the same borders, were supported by the international community, don’t you think that Israel would prevent this idea from being concretized?

Mahmoud Musa: Yes. Colonial-settler regimes always resist changing their supremacist, racist mind-set, and becoming democratic. However, the International Community is realizing that there is no room for colonialism, apartheid and ethnically pure States in the 21st century.

Silvia Cattori: If one considers the fact that before 1948 Arabs used to live in harmony with the Jews, who progressively came to settle in Palestine, it seems possible that they all live together. But after all the harm done to them, could the Palestinians share their lands with the settlers who shows an excluding behaviour, the rejection of Palestinians and of Muslim religion ?

Mahmoud Musa: Palestinians realize that the one democratic State will ameliorate the harsh conditions of being occupied or being refugees, and generate peace in the whole region.

Silvia Cattori: Some Palestinians already live in a same State as the Jews, in Israel. Except that today, they are discriminated and do not have the same rights as the Israelis of Jewish faith. But in order to bring this to an end, Israel should give up its status of Jewish State, and become a true democratic State. However, this seems unbelievable!

Mahmoud Musa: Colonial-settler regimes resist changing their mind-set as I said. However, there are many advantages for the Israelis if they give up these attitudes. Peace will decrease the need to waste resources on armament, and will open the vast market of the Arab and Muslim worlds. The International Community has an interest in facilitating this solution.

Silvia Cattori: Hasn’t the Palestinian Authority, which has given up the struggle since Oslo, become a burden for the Palestinian people, who suffers from the occupation, in addition to Israeli oppression?

Mahmoud Musa: The presence of the Palestinian Authority is an impediment to forming one State because they will lose their privileges. It is in the interest of bringing a solution to the conflict to have the authority dissolve itself and form a human rights party that will struggle for political and social democracy.

Silvia Cattori: How do you feel towards all those who, in Israel and in the world, sustain the political project of a State which exercises racist discrimination and denies the Palestinians to return on their lands ?

Mahmoud Musa: This is because the mass media is controlled by the powerful classes. However, this is changing, to a large extent due to the internet.

Mahmoud Musa: The Palestinian Authority is an authority without a State trying to perpetuate the fantasy of a State without a homeland. It is supported and maintained by the United States and its allies. It is also very corrupt. It is an impediment to bringing peace and prosperity.

Silvia Cattori: What message can you send to solidarity movements which have so far supported the policy of the Palestinian Authority ?

Mahmoud Musa: The international solidarity movements will serve the interests of all the peoples of the region and the cause of international peace by advocating for one democratic State on all the area of historic Palestine.

Silvia Cattori: In the current context, extremely gloomy, what can Palestinians still hope ?

Mahmoud Musa: Palestinians have struggled for about one-hundred years. They see many examples of peoples who struggled longer than this and achieved their goals.

Note: Professor Mahmoud N. Musa is a Palestinian whose family lived and worked with Jews in Haifa until 1948 when he became a refugee in what is now known as the West Bank. He trained as a medical doctor and research scientist in the United States and became a professor of psychiatry. He is currently the academic director of the Canadian Center for Comparative Cultural research www.ccccr.net.
He is the president of the Association for One Democratic State in Palestine/Israel www.one-democratic-state.org.
www.one-democratic-state.org/help.htm


the French version of this interview can be found here