There is a presence which is the symbol of all the horrors of these years.

Faceless, like the thousand of Afghans annihilated by Daisy Cutters, the most powerful weapon after the atomic bomb, used to level forests, hills and people in a single blow, leaving no trace.

A hooded, suffocated presence, yet full of life. Like that of each and every one of us, lucky enough to have the right nationality, not in prison, but who only have our tiny blogs to bear witness amidst the immense flow of money and words. 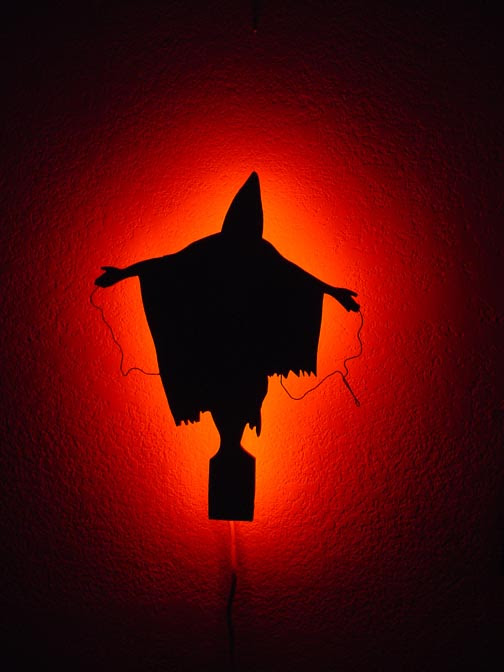 This faceless presence is Haj Ali, the ghost of Abu Ghraib. The man who was tortured and photographed in a sinister parody of the Statue of Liberty. Mayor of an Iraqi village, farmer and Imam of a mosque, unconnected to the Resistance, he was captured by the invaders on October 30, 2003, and tortured for months before being released in the first months of 2004. Today, he runs the Association of Victims of American Occupation Prisons in Amman (Jordan).

A few months ago, we tried to get him a visa so he could come to Europe and tell us about what he had been through.

Haj Ali al-Qaysi (Ali Shalal Abbas) currently lives in Jordan, so we contacted the Italian consulate in Amman. After a few days shuffling him back and forth, the Italian Consulate denied him a visa on the pretext that, as an Iraqi citizen, he should have asked for the visa in Baghdad instead.

We then tried with another European country, which could not make the same excuse: one of the most important German language TV channels invited him to Austria for an interview. Austria has a consulate in Amman only, not in Baghdad.

Austria too, despite its claims to neutrality, denied him a visa.

There is obviously an international prohibition against letting him into Europe. A prohibition motivated only by the intention to hide such a disquieting presence from all of us. A clear surrender of sovereignty by all the countries of Europe, under pressure from the USA. Indeed, a few months ago, no less than 44 US congressmen had written to the Italian embassy in Washington with an "invitation you can't refuse", asking the Italian government not to grant visas to Europe to members of the Iraqi opposition.

This is why we are asking websites and blogs to put up the banner of the campaign we are launching to allow Haj Ali to tour Europe and speak to us directly.

We are all involved in this war, and this is why we all have the right to know more about it.

This article in Italian

This article in Spanish

This article in German

This article in Portuguese

This article in Euskera (Basque)

For more information on Haj Ali:

Each banner links to a page in your language, where you can read updates on the campaign to grant Haj Ali a visa.
We invite everybody who is putting up the banner to send the URL in a mail addressed to:
kelebek@imolanet.com
Periodically, we'll update the list of banners linking to this article.