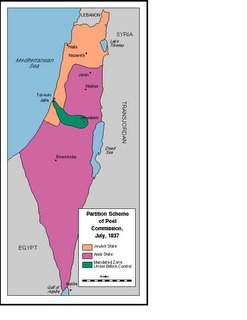 "The Zionist position on Palestine is primarily based on myth, distortions of history, propaganda and suppression of the truth."

In an article, “Munich,' the Travesty," published in The Washington Poston January 13, 2006 Charles Krauthammer, a well-known Zionist and regular Post Columnist, attacks Steven Spielberg’s movie for presenting several glimpses of the Palestinian perspective. Krauthammer and other critics of Spielberg’s movie continuously repeat discredited Zionist mythology, distort history, ignore inconvenient facts and hide Zionist terrorism, the raping of Palestinians, the massacres, the theft of land and ethnic cleansing of the Palestinians with the creation of the"Jewish State" in 1948.

Instead Krauthammer, and other Zionists, attack the Palestinians for kidnapping the Israeli athletes in Munich at the 1972 Olympics. These Zionists ignore the fact that Israel had been assassinating many leading Palestinians prior to the much-publicized Munich incident. They also ignore the historical context of the conflict.

The Balfour Declaration which called for the “creation of a Jewish national home in Palestine” is cited by Zionists as a basis of legitimacy for the creation of the “Jewish State.” This Declaration was issued by Great Britain, a foreign power, who had no right to give away someone else's country. The Balfour Declaration also contains the phrase "it being clearly understood that nothing shall be done which may prejudice the civil and religious rights of existing non-Jewish communities in Palestine....” This second promise is ignored by Zionists while claiming legitimacy from the first.

Also ignored by Zionists when discussing the Balfour Declaration is the fact that Sir Edwin Montagu, the only Jewish member of Lloyd George's cabinet when Great Britain issued the declaration 1917, was adamantly opposed to the creation of a Jewish state. Montagu attacked the Balfour Declaration and Zionism because he believed they were anti-Semitic. This argument was based on the fact that both Zionism and anti-Semitism were based on the premise that Jews and non-Jews could not co-exist.

Montagu was also afraid that a “Jewish State” would undermine the security of Jews in other countries. Sir Edwin’s opposition to Zionism was supported at the time by the leading representative bodies of Anglo-Jewry, the Board of Deputies and the Anglo-Jewish Association.

Also ignored by Zionists is the fact that European Jews may have no historical connection to ancient Israel or to Palestine. In the 8th Century there was a mass conversion of the Khazars to Judaism through which, according to many authorities, the majority of European Jews are descendant. Arthur Koestler writes about this conversion in his book The Thirteenth Tribe. Martin Gilbert's Atlas of Jewish History has a map of "The Jewish Kingdom of the Khazars" at page 25. According to Gilbert’s map The Jewish Khazar Kingdom is about the size of modern day Ukraine. Also see The History of the Jewish Khazars by D.M. Dunlop. There are many more sources that document the conversion of the European Khazars to Judaism. This is a forbidden topic of discussion for Zionists. If you point out this historical fact, you are often accused of being an anti-Semite.

Erich Fromm, the eminent Jewish scholar, stated that the Arabs in Israel had a much more legitimate claim to Palestine than the Jews. Fromm wrote: "The claim of the Jews to the Land of Israel cannot be a realistic political claim. If all nations would suddenly claimterritories in which their forefathers lived two thousand years ago, this world would be a madhouse."

Another fact ignored by Zionists is that the Roman Empire did not expel all of the Jews from Palestine. Many Jews stayed and later converted to Christianity and then to Islam. Many of the original inhabitants both before the creation of ancient Israel, the Philistines and Canaanites, and after ancient Israel and Judea fell, the Jews, remained in Palestine. The direct descendants of these inhabitants are the true owners of the land. Furthermore they held the legal deeds to their property until it was stolen from them by the Zionists using various legal pretexts.

This theft of land was based on a dubious claim that European Jewish settlers had a claim on Palestine based on an alleged presence 2,000 years ago. Since Herzl and the early Zionists were atheists who rejected a religious definition of "Jewishness" and wanted to normalize the existence of the Jewish people based on nationalism and race, claims of ownership based on "biblical promises" ring a little hollow.

The vast majority of the World, including the secular West, rejects biblical claims of “Jewish ownership” of the land in Palestine. Biblical claims would not negate the rights of the indigenous inhabitants and somehow invalidate the legal deeds for title to the property. Zionist claims are based on self serving mythology and illegality.

The United Nations also did not endorse the concept of a "Jewish State."UN General Assembly Resolution 181 passed at the UN on November 29th, 1947 by a vote of 33 to 13 with 10 abstentions. This vote was dominated by the Europeans as most Third World countries were not members of theUN but still ruled as colonies. The resolution called for the partition of Palestine into two states. One state had a tiny Jewish population and a very large Palestinian Arab majority. The other state was not demographically a "Jewish State."

The population breakdown for the so-called "Jewish state" was 509,780 Arabs and 499,020 Jews. These figures are according to the report of Sub-Committee 2 to the Ad Hoc Committee on the Palestine Question, UN Document A/AC 14/32, November 11, 1947. The so-called "Jewish State" had an Arab majority. It was in effect a multi-religious and multi-ethnic state. The UN resolution did not authorize the ethnic cleansing or “transfer” of the Palestinians. The Arab birth rate was also much higher than the European Jewish birthrate.

The expulsion of the Palestinians is Israel's "Original Sin" which Zionists want to ignore. However, Tony Kushner, a prominent American Jewish playwright and co-author of the screenplay for "Munich," at least acknowledged the Palestinian side in Spielberg’s movie. Israel's “New Historians,” Simha Flapan, Benjamin Beit-Hallahmi, Benny Morris, Ilan Pappe, and others have all documented, from Israeli archives and sources, the ethnic cleansing of the Palestinians.

The UN and international community have never recognized “Jewish nationality” as a legal concept. On this question see Thomas Mallison's article, “The Zionist-Israel Juridical Claims to Constitute 'The Jewish People' National Entity and to Confer Membership in it: Appraisal in Public International Law” in 32 Geo. Wash. L. Rev. 983 (1964). This article is still the seminal work on this issue.

The United States State Department has also rejected the “Jewish people” nationality concept. In a letter to Rabbi Elmer Berger (then head of the anti-Zionist American Council for Judaism) from Assistant Secretary Phillips Talbot, the State Department confirmed that it “does not recognize a legal-political relationship based upon religious identification of American citizens. It does not in any way discriminate among American citizens upon the basis of religion. Accordingly, it should be clear that the Department of State does not regard the “Jewish people” concept as a concept of international law.”

To accurately view the historical facts and the political and legal concepts involved, one has to conclude that the Palestinians have an exceptionally strong case and the Zionist argument is without foundation. The persecution of the Jews in Europe cannot rationally be used to justify the persecution of another people and to create a homeland in the Middle East for European Jews who had suffered at the hands of other Europeans.

The Zionist position on Palestine is primarily based on myth, distortions of history, propaganda and suppression of the truth. Zionism as an exclusionary political ideology is also a very dangerous philosophy. It is an ideology which has ethnically cleansed more than 700,000 Palestinians in 1948, invaded and occupied the rest of Palestine in 1967 and continues to illegally occupy Palestinian land today.

Zionism has also had serious repercussions on the situation of the Jewish Arab community. Zionism is also opposed on religious grounds by many Orthodox Jews including the Neturei Karta and the Satmar sects. Many other Jews are opposed to Zionism on the grounds that an exclusionary “Jewish State” is racist.

Zionism now threatens the very existence of the Palestinian people. Baruch Kimmerling, a leading Israeli academic, calls this “politicide". He defines politicide as “a crime against humanity that is very close in its severity to genocide.” Political Zionism and the campaign to dispossess the Palestinians from their homeland also threaten to destroy the Jews as a moral people and destroy the Jewish religious mission to be “a light unto all nations.”