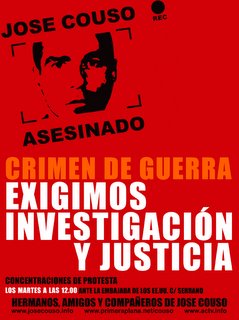 Javier Couso, brother of José, the cameraman of Tele5 who was assassinated in Baghdad by the Americans, saw Fallujah. He had gathered exceptional evidence on the use of chemical weapons and on the systematic violation of human rights in the martyred city where 50,000 civilians had been killed under the bombs and raids carried out by the Americans.

Javier was born at El Ferrol, in Galizia, Spain, the ugly port city where Francisco Franco was also born, of a family having military traditions. It is a familiarity that helps him in the extraordinary precision with which he describes armaments and martial facts. And the war, that of Iraq, had changed Javier’s life by killing his brother José, deliberately assassinated the first day of the conquest of Baghdad while he was working within the Hotel Palestine. On the facts of the Palestine where José Couso and Taras Protsyuk were killed, Javier is able to exhibit incontrovertible documents that evidence how a platoon of the United States army had that morning received the order to “go to the journalists”, first striking Al Jazeera and then Al Arabija, and finally, Hotel Palestine.

The documentary by RaiNews24 visually confirms that which Javier had for months been telling anyone who would listen to him. He was one of the very few westerners to have seen the Iraqi Guernica and he considered the number of 50,000 civilian deaths fully credible in a city that before the war numbered 350,000 inhabitants.

“It wasn’t easy to enter,” his visa dated from last April, “but we were so determined, that we succeeded in doing so. We brought medical and sanitary materials. Still today there is fighting in the city and even in our presence, a marine had fallen. All the houses, all the mosques have been destroyed,” he tells me. During all wars, the respect of places of worship is guaranteed and every time that it has been violated, the violation has been considered as a symptom of barbarianism. “Instead, in Iraq from the very start the mosques were considered as legitimate targets and in my opinion, that had been a precise choice, a deliberate way to provoke a civil war in the country.”

It is hard to think of a group of seven Spaniards crossing Iraq. “But the Iraqis, despite everything, seem to know how to distinguish between westerners. Our group was greeted with kisses and embraces, and thanking us for the withdrawal of the Spanish troops.” In the Admailla Quarter of Baghdad, considered ‘100% resistant’, initially there were threatening gestures, but they knew perfectly well who my brother was and therefore, even we were welcomed.” This was not the experience of the other westerners, including those kidnapped such as Giuliana Sgrena from Italy’s il manifesto : “and who knows why Giuliana was kidnapped and what interests were involved there?” Javier responded.

“We have evidence of entire families who had been assassinated, whose women had all been raped in a systematic manner by the American soldiers, of children riddled with bullets in their cradles, of persons assassinated while they were waving white flags in a sign of surrender, of dogs who are eating the cadavers that the invaders for days and days had prohibited any sort of burial.” The facts narrated by the direct witness of Javier are comparable to the stories of the Nazi occupation in Eastern Europe.

Javier Couso had gathered testimony everywhere on the evidence of the use of chemical weapons, napalm, phosphorus and on the strange illnesses that were starting to spread throughout the city: “The Jolan Quarter had been 95% destroyed. But not destroyed in a normal way. The rock had crumbled, transforming it not into rubble, but into sand. I don’t know what kind of explosive of such enormous power could have been used. Everyone speaks of chemical weapons, of persons practically consumed and especially of the illnesses that the survivors have been struck with.”
The torment for Javier is not yet finished, the humiliations of the survivors are constant: “An elementary school had remained intact, and therefore, occupied. I saw children have lessons outside of it, under a sheet of plastic and burning under the scorching sun.” All the health services have been hit and today are in fact, non-existent: “The most terrible experience that I have directly lived was seeing a boy of 22 years die before my very eyes for a mild respiratory crisis. We shared the desperation of the doctors. If only he could have had a bit of oxygen, his life could have been saved.”

The invasion, according to Couso, began right at the hospital: “The stories tell us that they entered in systematically striking people and robbing them, the gringos robbed everything they could. They then gathered together the doctors and nurses, they handcuffed them and left them kneeling with their head on the ground all night long.” Here the testimony of Javier Couso becomes even more crude, if that’s possible: “For at least eight days, while the city underwent a blitz not unlike that of Coventry, in no hospital, in no visiting room, in no medical centre was it permitted that a single wounded person be allowed to enter. This demonstrates that all the wounded were given the coup de grâce or they were left to bleed to death.” The images that have circulated around the world and which had been rapidly silenced, confirm the testimony of Couso. “It is a fact that they – the Americans – don’t deny it. They simply claim to have made an adequate use of force, according to their rules of combat. I suppose they are the same rules of combat of the Nazis.”

Translated from Italian into English by Mary Rizzo, a member of Tlaxcala, the network of translators for linguistic diversity (transltlaxcala@yahoo.com) This translation is on Copyleft.
The original article appeared on Gennaro Carotenuto’s blog, http://www.gennarocarotenuto.it/dblog/articolo.asp?articolo=313 The article was written for the weekly publication Brecha of Montevideo.
to learn more on José Couso, please visit http://www.josecouso.info/