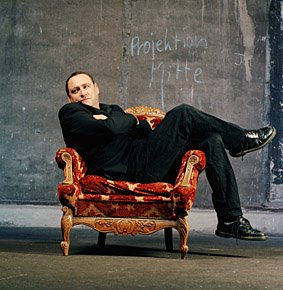 In these days immediately following the landslide victory of Hamas, many people had been caught unprepared to face such an outcome. It has been the object of debate and discussion, and following it on the "internet world" really could be a full-time job. Gilad had told me about an internet debate concerning the article he published here, Gilad Atzmon, Where to Now, Palestine? that was going on at Togethernet. This is the response of Gilad Atzmon to the “Open Letter by Elias Davidsson”.

Dear Friends,
I am sorry to disappoint you. I am not going to write a detailed rebuttal to Mr. Davidsson’s open letter. I would offer three reasons. First: I can’t see how the Palestinian cause would benefit from such a debate. Second: I don’t really have the time for that kind of nonsense. I perform every night in front of hundreds of people and engaging with one unhappy Davidsson is for me a total waste of time. Third: It isn’t nice to say it but Mr. Davidsson isn’t exactly a match. Reading his ‘open letter’ suggests that the good man is a conservative modernist who is deeply engaged in some dated vocabulary to do with ‘universal values’.

If Elias Davidsson were just slightly more educated he would probably grasp that the notion of universal humanism isn’t applicable to the Islamic and Judaic subject. Universalism and thinking in universal terms is the fruit of Western philosophy and enlightenment. It is intrinsically linked with the notion of the ‘subject’. Within Judaism and Islam the human is subject to God. He is a follower rather than a free thinker. This differentiation dismantles any possibility of cross-cultural terminological reduction between west and east. In other words, talking about Universal values is in itself a form of Western cultural colonialism. Davidsson wants to be a colonialist, who am I to stop him?

Needless to say, I do not believe in the notion of universal values. In fact, I don’t even know what ‘universal human rights’ are. Furthermore, I tend to be very suspicious of those who claim to know. Just because I open the newspapers from time to time, I know very well that Blair and Bush kill in the name of ‘universal humanism’. Those who follow my writings know pretty well that I am a devoted follower of Martin Heidegger. I believe that beings are shaped by language. In other words, for me, universal discourse and discourse of universality are nothing but meaningless. Moreover, I believe that those who try to impose discourse of universality on others are either ignorant or hegemony seekers.

As I said, I do not have any plans to address Elias Davidsson’s open letter. Instead, I will ask Mr. Davidson to send me or anyone else a bibliographic reference to his open letter following Sheik Yassin’s disgraceful assassination. If Davidsson is so outraged by me, surely the murder of Sheik Yassin must have moved him at least as much. In case he failed to issue such a letter at the time he may as well send me or anyone else his published comment or condolences for the Palestinian people following the brutal murder of Dr. Abdel Aziz Rantissi. I may press on and ask where were the Elias Davidssons and the gatekeepers of universalist values when the entire leadership of the Hamas was serially liquidated in broad daylight.

Let me say it, somehow they kept quiet. They were very, very quiet. Why did they keep quiet? Because they don’t like the Hamas. Being silent at such a grave time, they basically approved the Israeli controlled assassination policy. Somehow, Davidsson and those like him have very little respect for religious parties, politics inspired by religious tenets and religion in general. Indeed they love the Palestinian people, but only as long as they remind them of themselves i.e., ‘European middleclass atheist Jews ’. If it wasn’t clear until last Wednesday, now it is obvious. The Palestinians aren’t exactly middleclass atheist Jews. This is something Mr. Davidsson finds hard to digest and unfortunately, I can’t help him.

It is that very fact that made me so reluctant to have any contact with any of those ethnic Jewish campaigners. Needless to say, they all had tried to flirt with me and with my music for a very long time. But rather soon I understood that their agenda was totally hypocritical. It wasn’t Palestine that they cared about; it was the maintenance of their own rational atheist ideology at the expense of the Palestinian people.

Dear friends. For more than a while I know that the Palestinian street is drifting towards Islam. I may say it, unlike Davidsson and his ilk, I am not afraid of Islam. In fact I love Islam and love being in a Muslim environment. Moreover, I can see that democracy in the Arab world may lead to Islam while Islam isn’t necessarily committed to maintaining democracy. And how to say it, I am far from being bothered by it because if this is indeed the choice of the masses, it is good enough for me. If this isn’t enough, I am far from being enthusiastic about Democracy anymore. It is within the current phase of western democracy where bloodthirsty war criminals such as Blair, Bush and Sharon were re-elected.

I am not an expert on Islam but I know enough to say that Jews were living under the protection of Islam for hundreds of years. We all know very well that one of the principles of Islam is committed to protecting the foreigner. If I would have to choose between living in an Islamic Palestine or a Jewish one, I would be going for the Islamic one without a single doubt. Moreover, if I have to choose between ‘Jewish democracy’ and Islam I go for the latter.

I may admit that I was pretty concerned before posting my last piece. Most of my Palestinian friends are secular Muslims and Christians. Many of them are affiliated to the Fatah. They are all rather concerned with the latest development in their homeland. As I mentioned in my piece, the vote doesn’t express the will of Exile Palestinians. Anyhow, I understand my Palestinian friends very well. I grew up in Israel, a country that slowly but surely is shifting towards religious fundamentalism. I know what fundamentalism is all about and I know very well that I wouldn’t survive a single day in a Talmudic environment. I understand how difficult it may be for my Palestinian friends who became accustomed to western liberal life. I am aware of it all, and yet, those who dwell in occupied Palestine had their say, they went to the poll and gave all us a major lesson. They presented us with the most heroic spirit of resistance. They told the West, and Israel, and the EU, and the Arab world, and the Davidssons and the other gatekeepers, “you can all bugger off. We know what we want. We are tired of your phoney kindness. We are exhausted of your hypocritical willingness to help. We are sick of your solidarity. We don’t want you to tell us what we are and what we should be. Don’t liberate us and don’t save our women. We will take care of it all from now on. Leave us alone.”

Sorry my dearest friends, within this change in the air a rebuttal of Davidsson’s 19th century ideology is pathetically meaningless. I have only one duty. I have to travel from town to town and to congratulate the Palestinian people from the stage. This is what I am going to do today and tomorrow and the day after tomorrow. I did it in Istanbul for the last 4 days. As you probably can guess, everybody was over the moon. And I tell you why, because the rebellion spirit of the Palestinian resistance is a spirit people can empathise with. You know why? Because the Palestinians are in the forefront of the war against evil.

To read the letter from Elias Davidsson, please visit Axis of Logic