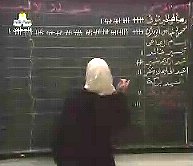 The Hamas landslide victory in Palestinian parliamentary elections has posed a new problem for Israeli expansionist occupiers and their supporters world-wide, particularly in the United States.

While Hamas won 76 out of the 132 seats in the Palestinian parliament, the Fateh ruling party won only 43 seats. This means that the Islamic Resistance Movement doesn't need a coalition with Fateh to rule the Palestinian occupied territories.

What is amazing is that the term "destruction of Israel," which was used widely and repeatedly, has never been mentioned in the Hamas Charter, as the propagandists asserted.

In fact, it is the old trick used by Israelis and their supporters world-wide, particularly in the United States, to force Palestinians to relinquish their right for all of Palestine before they can be dealt with. It is a pre-condition that Palestinians have to accept before they are allowed to sit on the negotiation table.

The trick was first used with Fateh in 1988, when its leader, the late President Yasser Arafat, had to accept it. He had to read a statement in Geneva saying that the PLO "renounces all forms of terrorism." He also had to announce that he accept the UN resolutions 242 and 338, which address only the Israeli occupation of the Palestinian territories after the 1967 war. When he did, the PLO relinquished its right to negotiate about the rights of the Palestinian people in all of Palestine.

This led to the Israeli acceptance of the PLO to participate in the Madrid Peace Conference, first within the Jordanian delegation, then to face Israeli negotiators directly in Oslo. This resulted in the Oslo accords, which were signed in Washington on September 13, 1993.

The Oslo accords gave Israel until 1999 to allow the establishment of a viable Palestinian state, by withdrawing from the West Bank and Gaza Strip. When the deadline passed without Israel fulfilling its obligation, President Clinton called on Barak and Arafat to finalize a deal at Camp David.

Moreover, despite Arafat's recognition of Israel and his choice of the peaceful path over armed struggle, he was punished when he objected to Barak's offer. He was isolated in his office in Ramallah until his death, or assassination in November 2004.

The historical record demonstrates that Israelis are not yet ready for peace with the Palestinian people. They have not expressed a genuine desire to live in peace with their neighbors.
They still steal Palestinian lands and build their illegal settlements on them. They grab Palestinian lands as a result of building their illegal Land-Grab Wall. Most important is that they have never expressed their willingness to admit their historical responsibility for the creation of the Palestinian refugee problem, when they denied Palestinians return to their homes at the end of the 1948 War, as UN resolution 194 demanded.

The lack of the Israeli genuine desire for peace is the explanation of why Israelis reneged on their obligation to withdraw from the West Bank and Gaza by 1999, and allow the establishment of a viable Palestinian state. It is the explanation of why President Bush did not fulfill his promise of a Palestinian state during 2005 or even during his stay of office until 2008.
Today, Hamas is faced with the same old Israeli trick of demanding it to "renounce terrorism" and stop its rhetoric about the liberation of all of Palestine.

If Hamas meets these demands, like Fateh did before, reading history tells us that it would also meet the same destiny of Fateh.

Hamas would find itself dragged into an endless process of negotiations that may lead the Palestinian people to nowhere. Then, a third intifada may start, and Hamas would be stamped again as a "terrorist" organization. Four years later, Palestinians vote it out of office and the Fateh opposition party may come back.

Isn't this, after all, how political parties alternate control of the Empire parliaments, including Republicans and Democrats in the US?

So, we should expect that the Empire propaganda machine continue its pressure on Hamas until it meets Israeli demands. Until this happens, Hamas will continue to be described as a "terrorist" organization, like the PLO before the Oslo accords.

In other words, what Israel has not been capable of achieving by brutal force of the occupation may be achieved by elections and media propaganda.