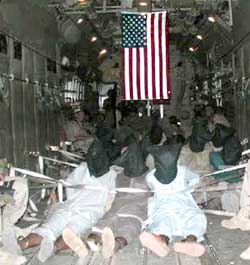 A letter from the Aljazeera cameraman prisoner in Guantanamo, to his British lawyer Clive Stafford-Smith (the first of three letters)

Punished for three grains of rice and four ants
By Sami Muhydin al-Hajj,

Dear Clive:
Let me make a confession: I cannot stop asking myself this question, why do they punish me? It is becoming an obsession, but I cannot get it out of my head. All these punishments began when they put me in prison in Bagram, Afghanistan.

They only allowed us to go to the athroom twice a day, the first time just after dawn and then just before dusk. We could only go when it was our turn. I remember that once I was very desperate and I whispered to the man in front of me in the queue, to let me get in front of him. The soldier, guarding us, bellowed with fury, “Do not speak!” and then ordered me to get out. He tied my hands to a wire and left me there all day on my feet and shivering with the cold weather. Eventually, I soiled my trousers, to the enjoyment of the soldiers and the whores present.

Then to Kandahar:
In full summer, under the blazing sun and walking on the burning soil, one soldier shouts, “You! Hold it there... the second one... the third one and also the fourth one! Why did you speak? Get on your knees with your hands on your head!

We were left like this, under the torrid sun and kneeling on the burning stones until one of us collapsed and the rest went to his aid.

One week, after arriving in Guantanamo, the soldiers got to the cages, very early in the morning and ordered all the prisoners to put their arms through the gap in the door that they used to get our food to us, because, they said, they were going to vaccinate us against tetanus.

When it was my turn, I said to them that I had been vaccinated before I left Doha, against tetanus, yellow fever, cholera and other illnesses and that according to the doctor there that these vaccines were active for five years. There was no point in having them again. The officer bellowed telling me not to argue, " Get your arm out or we'll get it out for you!” I refused.

They left me alone for the moment, and then, they returned after finishing with the rest. However, I kept refusing again and again. As a punishment they took all my things, from the mattress to the toothbrush, and I had to sleep on the floor for three days and three nights. I kept asking myself the same question that torments me: Why do they punish me?

Are we to take medicines by force? Have we suddenly turned into a flock of sheep? Do we have to accept everything without protest; without objecting to the excesses—without finding out at least what all this is about? 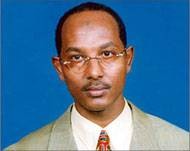 Many things worse than what I have described happened to me. One night I went to bed quite early. I was exhausted after spending many hours under interrogation. I was awakened by the shouts and commands from the soldiers. “Get your head and your hands out of the blanket!” I was startled so I complied. As a matter of fact, it was forbidden for us to sleep with our heads or hands covered by the blanket.

I went to slept again. Some time later a soldier started hitting the door of the cage as hard as he could and started bellowing, "Why did you put the toothpaste in the place of the toothbrush?” He accused me of refusing to obey military laws and regulations and ordered me to get all my things together. I was punished for a whole week.

And here I am again, asking the same question. Why do they punish me? How can they justify punishing me for a week, taking away all my things, leaving me with no mattress or blanket, obliging me to sleep on the floor? Another time, I was having breakfast, which consisted of the cold contents of a can. When I finished a soldier collected the leftovers and the plastic bags. He stopped at the door of the cage and counted the pieces, trying to put them together again. Suddenly he shouted, "Where is it... the piece that is missing?" I started looking among my things but I did not find it.

He immediately went away to report the problem to his superiors and came back with his orders. I had to be made an example. Yet again, they took away all my possessions for three days and yet again the same old question came back...Why do they punish me? What on earth would I want with a small piece of a plastic bag?Once more, providence reunited me in the same cage block with Yamel from Uganda, Mohamed from Chad and Yamel Blama from Britain. The colour of the skin and the hated orange of our boilersuits also united us. The black of our skins was enough to make the guards hate us and make our lives hell. Often they woke us up during the night under the pretext of searching the cage.

One night the soldiers woke me up for yet another search. They did not find anything suspicious, that is, except for three grains of rice on the floor that I had saved for the ants. This time they punished me for seven days and yet again, the same old question came back to haunt me… Why do they punish me?

I just couldn’t understand why three grains of rice and four ants were sufficient reason for them to punish me.

Another night two soldiers stood in front of my door. They were carrying chains and shackles. They banged on the door very hard and I felt afraid when I woke up. They chained me and took me to the Romeo Barracks. They pushed me into a cage. They took my boilersuit and I was left in my underwear. Nothing more, no soap or toothbrush or anything else.

No matter how many times I asked them why I was being punished I never got an answer. However, sometime later I was told that I was in solitary confinement for two weeks, because a soldier found a nail sticking out of the vent in my cage. I asked them from where they thought I got the nail or how did they think that I managed to stick it onto the outside of my cage. No answers—they just turned on their heels and left.

I spent 14 days sitting there, able to say my prayers as I could not do it with respect and dignity in that state of undress. I had to sleep for 14 cold winter nights on the ground without a mattress or blanket.

The harassment and the provocations from the soldiers went from bad to worse. Once we found out that a soldier had trampled on the Holy Koran and left the mark of his boots on it. All prisoners rebelled and decided to return all the copies of the holy book to the administration office so that they were not desecrated in front of us. The Camp Commandant promised that it would not happen again. But, of course, the promise was not fulfilled... The prisoners decided not to leave the cages, not even for walks or desperately needed showers, until they collected all the copies of the Holy Koran.

As always, the culprits came back barking orders and threats. The ruthless riot units arrived. They opened all the cages and beat up all the prisoners before putting shackles and chains on them. They all had their hair; moustaches and beards shaved by force and were thrown into isolation cages.

As it happened to all the others, when my turn came, I was sprayed with gas, beaten up and thrown onto the floor. Once there, a soldier got hold of my head and started banging it against the cement floor. Another one kicked me very hard in the face and immediately blood started pouring out of the injury. All this was happening as I was pinned down to the floor, chained and shackled. Like the others I lost all my hair and was thrown, drenched in blood into an isolation cage.

After an hour or so a soldier asked me through the vent if I wanted to see a doctor. I said no and prayed to Allah, putting before Him the injustices of those who had robbed us of our freedom and dignity. At one point, I felt very faint and I asked to see a doctor. When the doctor got there he gave me three stitches, put a dressing on my head and gave me some sleeping tablets, saying they were antibiotics. All that, through a gap of a few centimetres wide. I fell asleep knocked down by the terrible injustice perpetrated by those men.

The following morning the same old question came back as a curse... Why do they punish us?

Perhaps to defend my faith and my religion is a crime punishable with prison. Is it also a crime to ask that all copies of the Holy Koran are collected and kept in a safe place so they are not desecrated in front of us? Why am I here? Because I travelled to Afghanistan with my camera to film for four weeks the brutal war waged against the Afghan people, working on behalf of Al Jazeera. Is this also a crime, which has to be punished with (so far) more than four years in prison? Why did they accuse me of being a terrorist?

Far too many questions are swimming in my head and tormenting my spirit, together with all the slogans promoting deception and the justifying so many crimes committed by those who like to see themselves as promoters of freedom, defenders of democracy and protectors of peace on earth.

Original : http://www.aljazeera.net/NR/exeres/08DE9B0F-391A-42B4-B391-A73AE742F133.htm/ Translated from Arabic into French by Ahmed Manaï, a member of Tlaxcala,the network of translators for linguistic diversity (transtlaxcala@yahoo.com ), from French into Spanish by Juan Vivanco at http://www.rebelion.org , and from Spanish into English by Ernesto Paramo, a member of Tlaxcala. This translation is copyleft.French version : http://quibla.net/guantanamo2006/guantanamo1.htm Spanish version : http://www.rebelion.org/noticia.php?id=25069 . Italian version by Mirumir http://mirumir.blogspot.com/