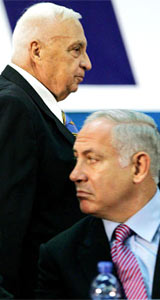 The controversial Israeli Prime Minister Ariel Sharon fell seriously ill on Wednesday January 4, and has since gone through several medical tests and surgical treatments to try and stop the severe hemorrhage in his brain. Since Sharon was admitted to the Hadassah hospital in Ein Karem, the Israeli public, as well as top Israeli government officials have been literally kept on their tip toes, as to whether Sharon will recover from his massive stroke. On the other side of the Annexation and Segregation Wall, Palestinians have also been closely monitoring the deteriorating health situation of the PM. With doctors and many political analysts saying that Sharon's political future is virtually over, it is worth exploring where the Middle-East peace (or lack thereof) is heading towards.

When PM Sharon took office in late 2000, he promised the Israeli public to bring the Palestinian intifada (uprising) to an end within one hundred days. He failed with his first promise, and the Palestinian uprising against Israel's illegal and prolonged occupation continued for another five years. This failure was one of the reasons that lead the PM to pursue more radical and inhumane policies, such as; targeted and add hoc killings, the further construction of the Annexation and Segregation Wall, expanding existing settlements, record breaking numbers of home demolitions. The culmination of these policies came in the form of the internationally acclaimed unilateral disengagement from Gaza, which saw Israeli security forces evict some 8000 settlers from Gaza and parts of the northern West Bank.

The unilateral disengagement from Gaza, the near completion of the Annexation and Segregation Wall, especially around east Jerusalem and the inclusion of major settlement blocks, the creation of four major airport like terminals along the West Bank, and the proposed annexation of the Jordan valley are all works of Sharon. It is needless to say, or maybe not, that throughout his reign as PM all of the above mentioned policies/developments on the ground, were pursued unilaterally reducing the Palestinian National Authority to mere recipients of Israeli dictates.

With the Israeli PM, so to say, laying the foundations for a very unjust peace agreement with the Palestinians, it would be fair to say that in terms of striking a genuine peace agreement, which many Palestinians and Israel's have sought, the future looks quite grim. Furthermore, contrary to popular belief, and what many media and political analysts have been uttering in recent days, that Palestinians have lost a partner they can do business with, Palestinians have actually been freed from a unilateralist leader.

So the question remains, where the peace process goes from here, or more precisely, what possible scenarios lay ahead? According to The Guardian's Chris McGreal, there are four possible contenders (successors to Sharon) in the upcoming parliamentary elections in Israel slated for March 28, they are:

To begin with, in order of the most reasonable partner for peace, Amir Peretz is definitely the best pick for Palestinians and Israelis alike, and for that matter, the peace process itself. Amir Peretz' credentials speak for themselves. A one time peace activist and a fervent social democrat, "he says he would immediately open negotiations toward final status talks and only if they fail would he attempt to unilaterally impose a border."

With the sudden illness of PM Ariel Sharon, as well as parliamentary elections on the door in both Israel and Palestine, it is an imperative that the international community, represented by the Middle-East peace quartet, step up there efforts to mediate and help both parties fully implement the provisions of the Road Map to peace in the Middle-East. http://www.miftah.org/Display.cfm?DocId=9356&CategoryID=3