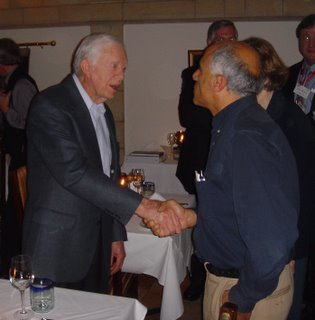 Yesterday was an eventful day in Jerusalem not only for the Palestinian elections, but also for the long-awaited trial of Mordechai Vanunu. In the photo next to us, we see Jimmy Carter shaking his hand as they met yesterday.

From Vanunu, the account of the trial:
Today's Trial
Mordechai Vanunu

Today, Jan 25th, the trial against me began in the lower court of Jerusalem.

Together with me were my brother Meir, Gideon Spiro, Ein-Gil from Tel-Aviv, and about dozen other supporters from Israel and overseas. The original date was for the 15th of January, but the SHABAK moved it to the 25th, today, Palestinian election day. So, no foreign media arrived and only three local journalists were in the court.

The state prosecution presented the court with copies of interviews by me with foreign media. Most of this evidence was in the form of text or sound downloads from the internet. Other evidence was video and disc copies of interviews by me with foreign television networks. Among the media bodies listed: BBC World, David Frost BBC, sky, ABC Australia-Late Night with Tony Jones, Radio KPFA in the US, Le Figaro from France, Asahi Shimbun from Japan. Other interviews were from internet websites and also included as an item internet chats.

Avigdor Feldman, my lawyer, argued that most of the items of evidence were not the original copies but downloads from the internet. Also he said that the foreign identity of the interviewers is not proved by the state, and that many names such as Amy Goodman could be found in the Israeli Resident Registry. Avigdor argued that State should have made some effort to prove the foreign identity of those who were supposed to have interviewed me.

This evidence was accompanied by testimony given by a police officer who interrogated me last year in a police station. This police interrogation was recorded by secret video camera without my knowledge. Also they brought the policeman who arrested me on my way to Bethlehem on Christmas eve 2004.

This was the first session. It took some four hours. The following session will be on the 9th of February for more witnesses by the police.
So this is "the trial" that Israel wants, at the same time they are hiding it, hiding the fact that this is a trial not about 'state security', as they have said in the past 20 years, but about the fact of me SPEAKING TO THE PRESS! NO 'NUCLEAR SECRETS' INVOLVED! I HAVE NO MORE SECRETS SINCE THE PUBLICATION IN 1986!

NEVER IN ALL MY COURT CASES HAVE I FOUND THE COURTS SEEKING THE TRUTH OR JUSTICE AND I DOUBT THEY WILL NOW.
-VMJC.
And, he added in a further note:

It was good surprise to find myself in the restaurant eating dinner while Jimmy Carter come to have his dinner in the American Colony restaurant, where I was invited by a friend Tom Hopkin, while Carter and his wife were leaving, his wife recognised me and I came to say hello, she introduced me to Carter, for few seconds, Carter and his wife say they will be very happy to see me in US. Just good to meet a man of peace in this very crazy region, and after the trial of yesterday.

Anyone wishing to show their support to Vanunu and free speech, be present at the Russian Compound in Jerusalem on 9 February. Details on http://www.serve.com/vanunu/