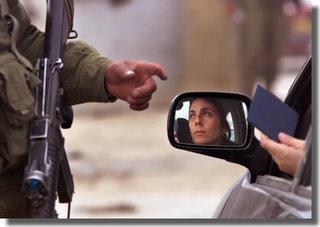 Back in September, Dorothy told us about Lina's Kidney transplant here. Today, a letter that tells us how Lina is doing, but gives us a slice of life and daily humiliation that the Palestinians must endure.
Dear, dear Friends,

One last message before shutting down this email address for 5 weeks.

Today Lina had an appointment for a follow-up at Hadassah hospital Ein Karem. Spouse and I drove to Kief el-Hares to collect her and her parents for the drive to the hospital.

We had a super day, as far as concerns Lina. The surgeons are very pleased with her progress, so much so that they decided that this would be her final visit with them, and that she should graduate to follow-ups with a pediatric nephrologist.

The appointment with the nephrologist was arranged quickly, thanks to the transplant unit’s one-of-a-kind marvelous coordinator, Hani Steinberg. Additionally, the gentleman who has offered to fill in for me in driving the family, also came to meet us at the hospital. He seems to be a very fine person, with a genuine desire to see to it that the family is not left unattended. This was very important for me, because although Lina is doing very well, she is far from being out of danger. Her immune system remains very low due to medications that she is taking, so that going to the hospital by public transport is not advisable. Moreover, the doctor and Hani both reminded Fareed and Amina that should Lina have even the slightest fever, they must contact the surgeons immediately (who will advise in such an event).

But Lina, who will be 4 years old on March 26, knows nothing of such matters, and is a happy and vivacious little girl. Such a contrast to the thin, weak child that she was prior to the transplant.

We capped the several hours at the hospital with lunch on the way home, at a restaurant in Abu Gosh. A real treat.

All in all, a very satisfying day, from the standpoint of our day with Lina and her parents.

But it was far from a perfect day.

The first indication that we would come face to face with the regulation was a new sign just before the checkpoint advising us that this was an Israeli-only checkpoint. The sign is in Hebrew and Arabic only, which is unusual, since all other signs on Road 5 are also in English. The sign first welcomes travelers to the Trans-Samariya crossing. The next line advises that the crossing is restricted to Israelis only, and is prohibited to all who are not Israelis, including persons being transported. The sign then defines "Israelis" not only as citizens or residents of the state, but also as tourists or anyone entitled to immigrate to Israel under the Law of Return. In other words, Palestinians are the only excluded—excluded from using roads in Palestine, excluded from entering Israel through checkpoints designated for Israelis and everyone else, except for Palestinians.

After photographing the sign, we then proceeded to the checkpoint. I have passed through this checkpoint dozens and dozens of times over the past few years with Amina and other Palestinians in the car. Usually I have not been stopped. The soldiers look at me, an elderly occidental lady, and wave me on, without paying much attention to whom is sitting next to me or in the back of the car. Today, even though we were 2 elderly occidentals in the front—myself and spouse—the soldier scanned the whole car, then asked for IDs, and then informed us that Palestinians could not cross, and that we would have to turn around and go back miles and miles out of our way to cross into Israel.

In our case, all ended well. The soldier was a decent sort. After he heard our story and that we were headed to Hadassah Ein Karem hospital, he said he’d try to help. This involved his phoning the DCO (District Coordinating Officer) and getting permission to let us through, as an exception. The soldier informed us that if the DCO refused, we’d have to go the round-about way. After about ½ an hour, permission was granted. But this was a one-time thing. And the fact that we got through today does not make the policy right.

In addition to the checkpoint, new apartheid measures are cropping up almost daily in the Salfit area of the West Bank—fences fences and more fences, for one. Sniper towers, for another. And the latest addition is gates at the entrances to villages, gates that soldiers can close at will. Moreover, some villages that previously had 2 or 3 entrances, have had all but one blocked, which means that a person living at the end of the village where access has been shut off might have to travel kilometers to exit his/her village. APARTHEID is clearly increasing, as are signs of Israel’s non-intention to return any of the West Bank to the Palestinians.

But making life difficult and miserable for Palestinians is not the way to happiness for them nor security for Israelis. As Fareed forlornly remarked today, all this pressure on the Palestinians will in the next elections drive them to vote for Alqaeda.